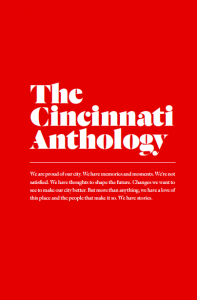 The Cincinnati Anthology brings together some of Cincinnati’s most notable residents, native sons and daughters, creatives, and contemplators to tell tales of a city’s triumphs and tribulations. The work included — essays, art, and photography alike — reflects the complexity of the city: its present and its past, its transition and its legacy; what defines it and distinguishes it; what makes us love it and what makes some eventually leave it. It is an anthology on genealogy and geology, race and progress, and experiences from the suburbs to Over-the-Rhine.

Praise for The Cincinnati Anthology

“A deft, well-considered collection of essays, illustrations and photographs that represents…‘the visions of those who have fallen madly in love with the city of Cincinnati, either for the first time or all over again.’”
— Cincinnati CityBeat

“A pretty incredible 200 pages of the city, what brings it together, what pulls it apart, and how convenient it is that the red and white of Cincinnati jerseys match the red and white of a stitched baseball. The Anthology is very cool, very mixed-media, and very much something you should buy for only $20.”
– Red Reporter

“The twenty-three disparate pieces in the book reflect many faces of the city, some famous and some rarely glimpsed, much less exposed. Of course there are the hillsides and bridges and big brand corporations, the disgraced baseball legend and elegant arts czar. But there’s also an alienated poet and a dissatisfied transplant and a stunning set of photo portraits that illuminate relationships in the neighborhood of Price Hill by cutting through stereotypes, one frame at a time.”
— Middle West Review