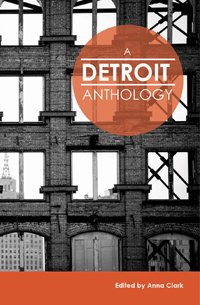 A Detroit Anthology is a collection of Detroit stories for Detroiters told by longtime residents and newcomers; activists, workers, teachers, artists, healers, and students. Because while Detroit has always been rich in stories, too often those stories are told back to the city by outsiders looking in, believing they can explain Detroit back to itself.

As editor Anna Clark writes in the introduction, “These are the stories we tell each other over late nights at the pub and long afternoons on the porch. We share them in coffee shops, at church social hours, in living rooms, and while waiting for the bus. These are stories full of nodding asides and knowing laughs. These are stories addressed to the rhetorical “you” — with the ratcheted up language that comes with it — and these are stories that took real legwork to investigate. … You will not find “positive” stories about Detroit in this collection, or “negative” ones. But you will find true stories.”

Anna Clark is a freelance journalist in Detroit. Her writing has appeared in The New York Times, The New Republic, The American Prospect, Grantland, Vanity Fair, the Columbia Journalism Review, Next City, and other publications. She is the director of applications for Write A House and founder of Literary Detroit, and the author of Michigan Literary Luminaries: From Elmore Leonard to Robert Hayden.

Praise for A Detroit Anthology — A Michigan Notable Book of 2015

“While many books have been written on and about Detroit by writers who have visited, this anthology of prose, poetry, and essays is written by the metro area’s residents themselves … it’s the wide ethnic array of voices that truly shows the facets of Detroit life.”
— Ebony Magazine

“In a city that often pits people against each other based on race, class, and geographic location (although this is often linked more closely with the other two factors), [A Detroit Anthology] brings everybody to the table to have a voice.
—The Urbanist Dispatch

“What these writers share, despite their differences of age, race, gender, and temperament, is the understanding that one has to know Detroit’s history before even beginning to imagine how the city might move forward.”
— The Daily Beast

“There is no cheap nostalgia or breathless boosterism. … the book is a thrilling success. It gives voice to people who now live or once lived in this fascinating, tortured place, the survivors, good people who know what pain is, people who understand that the city exerts an undying pull on them.”
— The Millions

“Anna Clark’s writing has always impressed me, and she proves herself a talented editor as well with A Detroit Anthology. These essays, stories, poetry, and photographs from a diverse group of writers offer a mesmerizing portrait of the city’s past, present, and future.”
— Largehearted Boy