Kaufmann’s, Pittsburgh, and the End of an Era

Light-Up Night won’t be the same.

Pittsburgh’s annual celebration, held the Friday before Thanksgiving, encourages shoppers and visitors to come downtown. Christmas decorations make their debut, and the stores are open late. Still, the event isn’t the easiest sell in a city with medieval roads and parking that’s either nonexistent or pricier than a home in Shadyside.

But this year, organizers face a new challenge: The department store at Fifth Avenue and Smithfield Street has closed. The 13-story building was sold by its owner, Federated Department Stores, and will be redeveloped. For the past nine years, the store was officially Macy’s, but for the 118 years before that, it was Kaufmann’s — and to Pittsburghers, who give directions with phrases like, “Turn left where the Gulf station used to be,” it always will be. 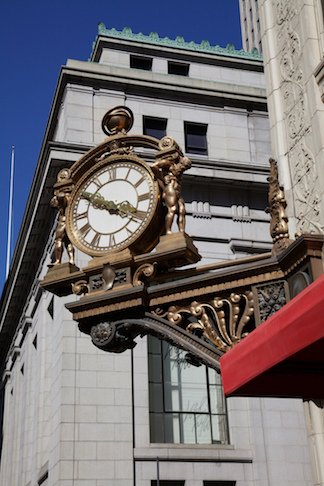 In the 20th century, every city of any consequence in America had its own department stores. In Youngstown, they were Strouss’s and McKelvey’s. In Toledo, it was Lasalle’s and the Lion Store. In Cleveland, it was Higbee’s and Halle’s. And in Pittsburgh, Kaufmann’s reigned supreme. Its rank was no small feat: At its retail peak shortly after World War II, downtown Pittsburgh was home to five department stores, an overachievement for a city its size. Even as the 2000s dawned, there were three stores within a block of each other, all part of a concerted effort by the city administration to make downtown a retail destination. But those were stores lured downtown by tax breaks, against retail trends: Consumers had moved on to shopping malls years earlier, and were now in the nascent stages of moving on from malls to the Internet. By the time the Kaufmann’s name disappeared, downtown was already on borrowed time.

At its height, Kaufmann’s was more than just a retail palace. Its best-known owner, Edgar J. Kaufmann, was heralded as a merchant prince and became a benefactor of numerous causes throughout Southwestern Pennsylvania. The clock at the corner of Fifth and Smithfield was a meeting place for friends (“Meet me under the Kaufmann’s clock”) and enemies (“Kiss my ass under the Kaufmann’s clock”). The store was founded by a pair of brothers, Jacob and Isaac Kaufmann, as a menswear and tailoring store on Carson Street, on Pittsburgh’s South Side, in 1871. Two more brothers, Morris and Henry, would emigrate from Germany to join the store, which moved across the Monongahela River to a four-story location in 1877, on the opposite side of downtown from Horne’s Department Store. A decade after that, Kaufmann’s had become a full-fledged department store, adding women’s apparel, housewares, and other products. 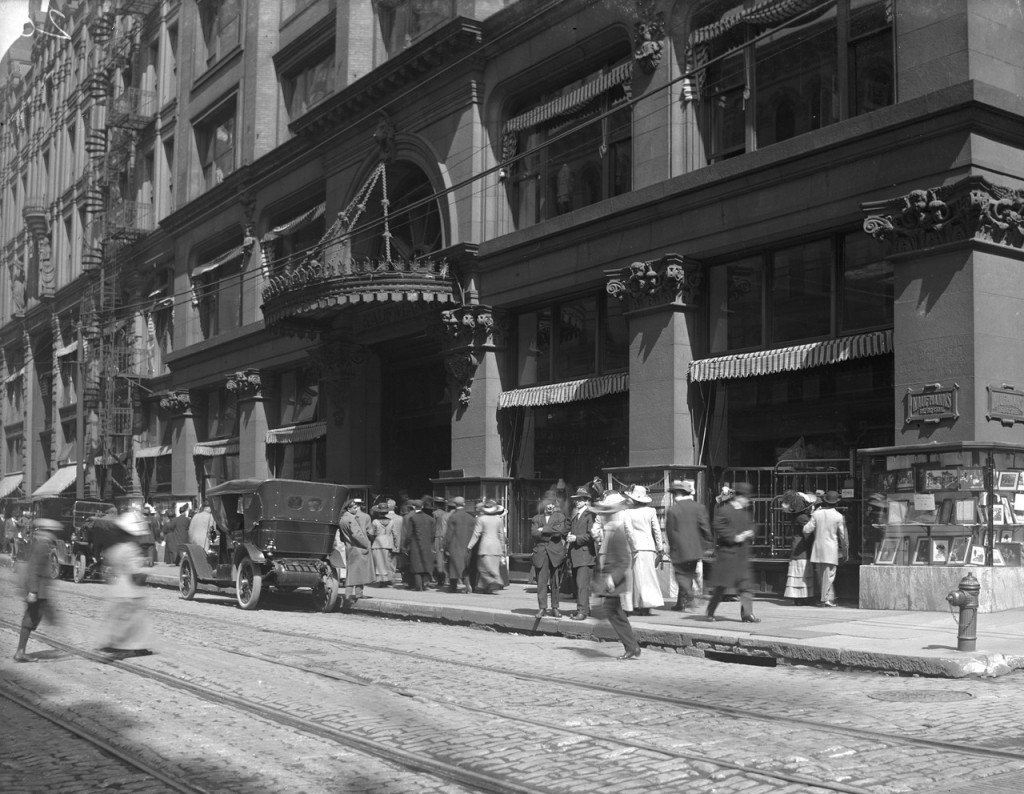 A view of Smithfield Street at Diamond Street, showing a crowd of people walking by Kaufmann’s Department Store.

The store continued to grow and prosper under the watchful eye of Morris’s son Edgar. Pillars were covered with black marble, the first floor had wall-to-wall murals, and Edgar’s office at the store was designed by Frank Lloyd Wright (Edgar and his wife, Liliane, remained close with the celebrated architect, commissioning him to design Fallingwater, their home in Fayette County).

In 1946, Kaufmann’s celebrated its 75th anniversary — and was sold out of family hands to the May Department Stores Company. Although he remained involved with the store, the sale allowed Edgar to focus on philanthropy and arts patronage (the Civic Arena, most famous as a rock concert venue and the home of the Pittsburgh Penguins hockey team, was built for the Civic Light Orchestra in accordance with plans originally developed by Kaufmann) — and came right before the era of the shopping mall and a rash of department store consolidations.

During World War II, people worked around the clock for the war effort, and the production of consumer goods was suspended (there are no American cars for the model years of 1943 through 1945). Disposable income went to war bonds. After the war, people wanted to spend money — and they had money to spend. Furthermore, the postwar era continued what Henry Ford had started 35 years earlier: the widespread availability of cars and the subsequent mobilization of the American public. Cars were no longer out of reach for most families, and some families with one car were able to buy another. Now people no longer had to live within walking distance — or a trolley ride — of work, and the population migrated to the suburbs.

So did the stores. Kaufmann’s opened its first branch store in Monroeville, east of the city, in 1961, followed by a store on the southern edge of Mt. Lebanon, an upper-middle-class inner-ring suburb in the South Hills, in 1964. A Kaufmann’s opened on McKnight Road in the North Hills a year after that. The suburban rush became a zero-sum game: Frank & Seder’s closed its store in downtown Pittsburgh in 1958; Rosenbaum’s closed two years later. In 1979, the third-largest mall in the world, Century III, opened in the Pittsburgh suburb of West Mifflin. It was built on the site of a U.S. Steel slag pile, as the steelmaker was in the process of diversifying (and divesting; the closing of its Ohio Works in Youngstown was at hand), ultimately rebranding as USX Corporation. Of course, it included a Kaufmann’s.

The 1970s and 1980s were not kind to department stores, in Pittsburgh or in general. Gimbels — the New York-based department store that had entered the Pittsburgh market in 1925, when it bought Kaufmann and Baer’s, a store founded by cousins of the Kaufmann brothers — was swallowed up by the tobacco company Brown & Williamson, which spun its real estate holdings into a company called BATUS and then closed the Gimbels stores in 1986, including the location in downtown Pittsburgh (the Gimbels stores at the Monroeville and South Hills Village malls became Kaufmann’s stores, and the Mt. Lebanon Kaufmann’s was turned into the Galleria mall). Montgomery Ward — which traced its roots back to the first mail-order catalog — changed owners and began closing stores. McKelvey’s was swallowed up by Horne’s, which itself was acquired by ADG, the chain of department stores that started as Associated Dry Goods in New York in the 1920s. Then, after ADG was purchased by May Company, the parent of Kaufmann’s, Horne’s was sold to Dillard’s (which also bought the Cleveland-based Higbee’s chain) and then to Federated, which was quickly becoming the 800-pound gorilla in department stores. 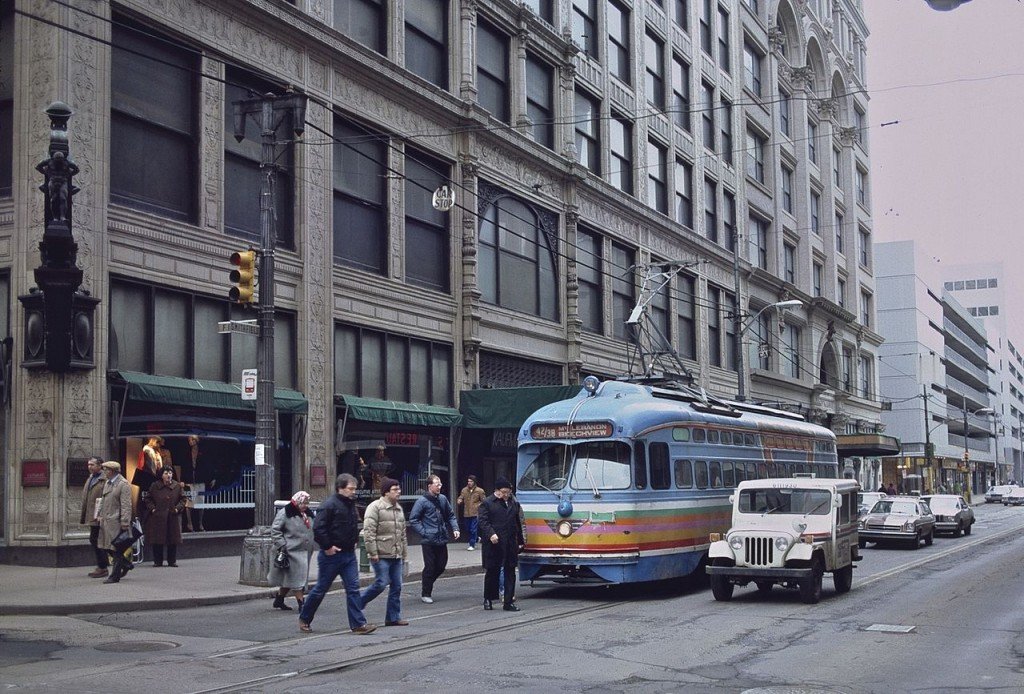 Federated was formed in Columbus in 1929, with names like Filene’s and Bloomingdale’s among its holdings. After World War II, it continued to buy other department stores, becoming one of the largest retailers in the country. The debt accumulated from these purchases forced Federated to declare bankruptcy in 1990, but it emerged two years later. It even swallowed up Macy’s, probably the best-known department store in the United States thanks to both Miracle on 34th Street and the Thanksgiving Day Parade (a tradition started by Gimbels, in fact). Through the 1980s, Macy’s had acquired smaller regional chains, but it overextended itself and declared Chapter 11 bankruptcy in 1992; two years later, when it merged with Federated, the result was the largest retailer in the country. Without anyone realizing it, this was the beginning of the end for Kaufmann’s.

In the early 2000s, the administration of Mayor Tom Murphy lured department stores downtown with tax breaks and incentives. Lazarus, a Federated store, opened on Fifth Avenue in 1999, and Lord & Taylor — another May Company store — opened a year later in the former Mellon Bank headquarters. There was also a Saks Fifth Avenue, a company that originated as an upscale brand by Gimbels before moving into its own store in Pittsburgh in 1949. Although the Horne’s name had disappeared from stores, it could still be seen on its flagship building in Pittsburgh, which was occupied by Old Navy.

But towering above them all — literally, with a 13-story building — was Kaufmann’s. The store remained, occupying seven floors. There was a salon. There was the Tic-Toc, a lunch counter on the ground floor, as well as the Arcade Bakery. And there was still the clock.

But even then, there were empty storefronts, or storefronts filled — in the eyes of the city — with the “wrong” type of businesses: pager stores, shops that sold wigs and hair extensions, check-cashing places, a discount jeweler. City officials wanted to take a city block by eminent domain and turn it into a mall. There was talk of a Nordstrom joining the mélange of department stores downtown. The plan never materialized, and Nordstrom ended up at Ross Park Mall. The Lazarus and Lord & Taylor closed within months of each other in 2004. And the next year, Federated announced it was buying May Company, the company that owned Kaufmann’s. 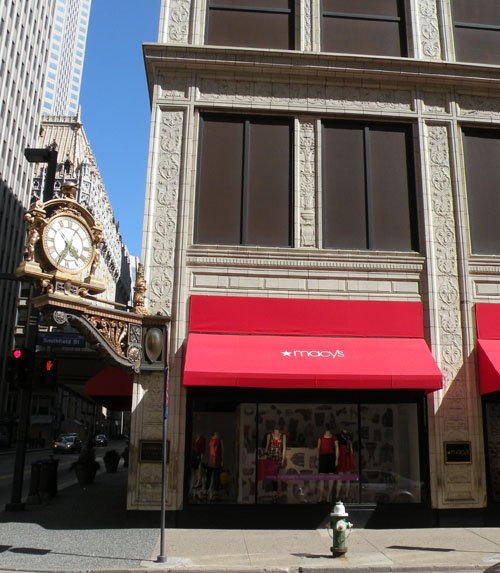 Little by little, the playbook for out-of-town ownership was executed. A year after the merger, Federated announced that all the stores it owned would be rebranded as Macy’s — Pittsburghers now would have to meet under the Macy’s clock. Then the billing and catalog departments on the building’s top floors left, moved to hubs to streamline operations.

Meanwhile, the Great Recession was having its effect on retail, an industry already in turmoil as shopping became something done in your jammies while looking at a computer, not something for which you got dressed up to go downtown (Internet sales have doubled in the past decade, accounting for more than 7 percent of all retail). The economy improved, but malls are faring as badly now as downtown department stores were a generation ago: Century III is now more than half vacant, and malls in Northeast Ohio have become the latest ruin-porn subject. In fact, one-fifth of shopping malls nationally have more than 10 percent vacancy, and roughly 3 percent — like Century III — have vacancy rates of 40 percent or more.

In July 2015, Federated announced that the Macy’s downtown — the original Kaufmann’s — would close. It did so in September after liquidation. The store’s historic significance is known and appreciated, with fixtures and documents donated for posterity to the Senator John Heinz History Center and the Western Pennsylvania Conservancy, which now operates Fallingwater, the former Kaufmann family home. The Tic-Toc and the Arcade Bakery names went to the Urban Redevelopment Authority to be used again in the hopes of capitalizing on Pittsburghers’ warm memories.

By the time Macy’s closed, it was a relic in its time. For much of its history, shopping was an event; eventually, however, people went looking for things to buy, not for the experience of buying. Looking at the fate of some of its contemporaries — the Higbee’s store in downtown Cleveland, immortalized in the film A Christmas Story, is now a casino; Hudson’s in Detroit was the site of what was then the largest controlled implosion in the world, in 1998 — it’s nothing shy of miraculous that it survived as long as it did.

___
Vince Guerrieri has spent pretty much his whole life in the Rust Belt. He was born in Youngstown three weeks before the mills started closing, and left there without really escaping. He’s a Bowling Green State University graduate, spent 15 years in newspapers, and lives with his wife and daughter in suburban Cleveland, where he’s slowly trending toward respectability (and he’s just as surprised by that as you are).