The Farmer and I: A Rookie’s Field Guide to Farm Speak

When I married a grain farmer and moved to northwest Indiana eleven months ago, I knew next to nothing about farming.

I had been interested in Adam’s work while we were dating, but realizing that I would, by default, become a player in the family business as soon as we married, my interest took on new urgency. Moreover, I didn’t want to be a coddled (sub)urban princess who is disdainfully “not from around here” and doesn’t care to understand, much less do, farm work.

I did want to do farm work, actually, but a decade of indoor desk jobs and average-at-best maneuvering in my Toyota Prius hadn’t prepared me for harvesting corn.

[blocktext align=”left”]A decade of desk jobs and  maneuvering in my Prius hadn’t prepared me for harvesting corn.[/blocktext]If it were up to me, Adam would have handed over a detailed manual on the ins and outs of our family farm. I would have studied that text like the good student I was, taking notes, making flashcards, and demanding a final exam to prove that I was, at least on paper, farmer material.

There is no user’s manual. But I still wanted concrete answers to my questions about what it means to have and operate a farm. I wanted to know everything before I drove up the lane to stay forever.

Turns out, that’s not how life—or learning a new way of living—works.

[blocktext align=”right”]There is no user’s manual for farming.[/blocktext]I am enjoying the slow process of understanding what grain farming is about. Unsurprisingly, one of the central truths is that no two farms operate exactly the same way. Another truth: The work of farming has changed considerably over the last forty years.

I suppose every new farmer must learn for herself. But for those who want just enough knowledge to be dangerous, a glossary of common terms and phrases is the closest thing to a grow kit.

To that end, here’s an introductory guide to farm speak, based on the experiences of this tenderfoot.

acre n – A unit of land area that is a) equivalent to 43,560 square feet and b) really difficult for me to grasp visually. There are 640 acres in a square mile and about 1.32 acres within the boundaries of a football field (end zones included).

auger n – A tall motorized screw that moves harvested grain up into a grain bin for storage.

beans n – Known formally as soybeans, these beans are close kin to the edamame pods that might be served in your local fusion restaurant, but trust me—they don’t taste the same. Beans are harvested dry for the small, spherical seeds tucked inside each pod. Determining when beans are ready for harvest is a nuanced and delicate process, i.e., completely subjective and a great topic for a future essay.

[blocktext align=”left”]This is not the kind of corn you might bring home from a farmer’s market.[/blocktext]bushel n – A unit of weight used to measure grain commodities, including corn (shelled corn, meaning just kernels; husks and cobs removed), and soybeans (the seeds removed from their pods). A bushel of corn is 56 pounds, while a bushel of soybeans is 60 pounds. Those numbers assume a specific moisture content for each type of grain (I’m glad I’m not the only one who gains water weight), but that’s—in Adam’s words—an “advanced farming concept” and perhaps beyond the ken of beginning farmers like us. Also worth noting: There is a price per bushel for each grain commodity, and whenever the market is open, the price is subject to fluctuation.

combine (KAHM byn) n – A very large machine on wheels that picks, strips, and sorts each plant, keeping the valuable part. Each kind of crop requires a specialized head attached to the front of the combine. To me, a bean head looks a little bit like a rotating paddle wheel on a riverboat. Has nothing at all to do with that event where NFL prospects work out in front of old guys with clipboards, apart from the NFL also being a very large machine.

corn n – Also known as field corn, this is our other cash crop. This is not the kind of corn you might bring home from a farmer’s market to drench in butter and eat happily off the cob. This kind is destined to become a processed food product, animal feed, or ethanol. In a good year, corn grows 8–10 feet tall (see also: “knee-high by the Fourth of July”).

[blocktext align=”right”]We like to coax visitors to the top of the grain bin.[/blocktext]family farm n – A farming operation that is not owned and run by a corporation and employs at least a couple of people who are related to each other by blood or marriage. The phrase “family farm” is often preceded by “small,” and is sometimes positioned as the opposite of corporate growing operations and Concentrated Animal Feeding Operations (CAFOs). There is so much more to explore here, but we can’t let our field guide get too hefty.

grain n – Used here, it’s a catchall term to mean crops that produce a seed that is traditionally used as food. Though wheat and rice are often the visual we get when singing about “amber waves of grain,” corn and soybeans (and oats and a bunch of other grasses) are considered grains, too.

grain bin n – A large, cylindrical, metal vessel for storing grain. We like to coax visitors to climb to the top and look down into the bin to get a sense for how much corn one bin holds. Believe it or not, more than one visitor has fantasized aloud about diving into the corn like Scrooge McDuck swimming in his money vault.

grain elevator n – A place that farmers can sell their grain to a grain holding company. The grain holding company can then store the grain or sell it to processors that produce food, fuel, and animal feed. You’ll know a grain elevator by its immediate proximity to railroad tracks, its very large augers and grain bins, and the way small towns have grown up around it.

lane n– What we suburban kids would call a gravel driveway.

overalls n – Heavy-duty denim pants with over-the shoulder-straps, a front bib, and a multitude of handy pockets, worn unironically by toddlers and farmers. As a child who became aware of fashion in the late 1980s and ‘90s, imagine my surprise when I was told to wear overalls over my jeans before committing acts of farming. (Didn’t I have pants on already?) Overalls are not to be confused with coveralls, which have long sleeves and zipper up the front.

pesticide n – A general term for a chemical that is designed to kill things that might threaten the viability of a crop, including other plants (herbicide), insects (insecticide), molds, mildew, and other fungi (fungicide). 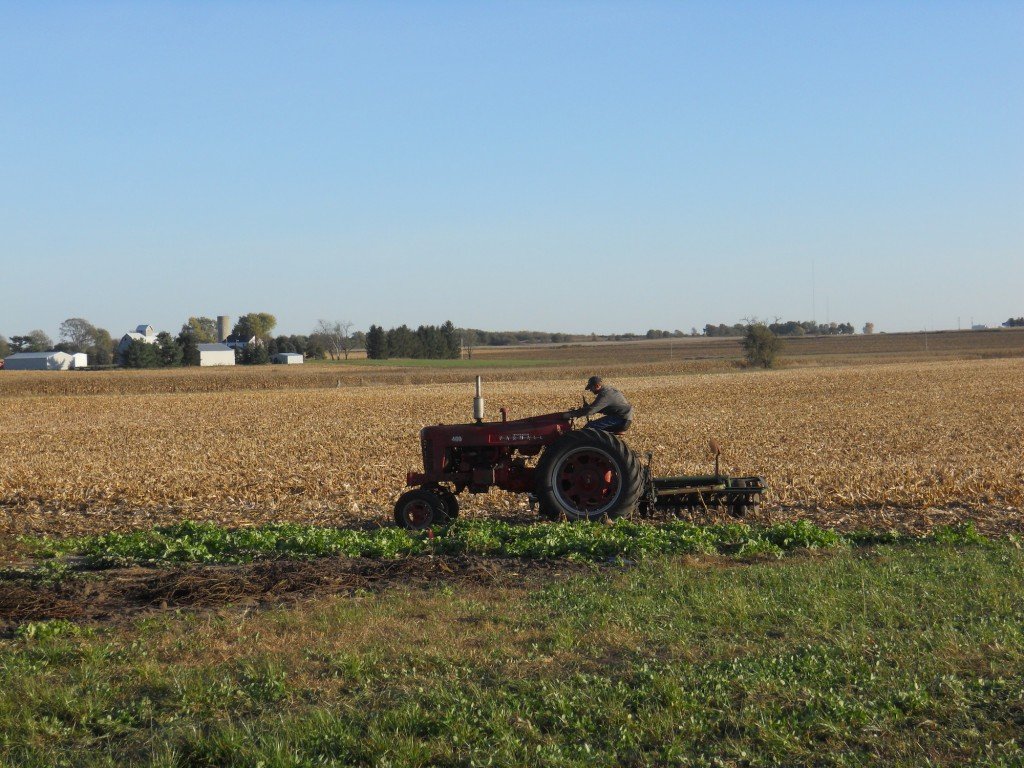 planting n – The process of preparing the soil, putting seeds into the soil, and maybe fertilizing the seeds, usually starting in mid-spring and (ideally) wrapping up by the start of summer. Planting is one of the busier seasons on a grain farm, and it is marked by hours spent in a tractor looking backward to make sure everything is working properly while trying to drive 4 mph in a straight line. (Adam would want you to know this is more difficult than it sounds.)

[blocktext align=”right”]Adam would want you to know this is more difficult than it sounds.[/blocktext]rain gauge n – One of the most crucial tools on a farm, it is a small vessel that collects and measures rainfall in tenths of inches. Checking the rain gauge after a weather event can make or break a farmer’s mood for the rest of the day.

Roundup® n –I’ll let Monsanto and MIT handle this one.

shed n – A place to store farm equipment that is not nearly as small as it sounds. Also, with an enterprising mother-in-law and a few folding chairs and tables, a shed is a great place to have a wedding reception.

shooting the shit v – An important social practice in the farming community. Though often claiming to be too busy to socialize in a formal or planned way, farmers seek opportunities to chat with each other one-on-one or in small groups. Favorite places for shooting the shit include diners that serve bottomless cups of coffee, Dairy Queen, or through the driver side window of a pickup truck on the side of the road.

[blocktext align=”left”]I dare you to ask a farmer about till versus no-till.[/blocktext]till/no till n– That is the question. This is another topic that deserves its own essay. Traditionally, grain farmers have tilled their fields both after harvest and before planting to break up plant material left over from harvest and to prevent weeds from taking root. No-tillage is a technique that leaves fields undisturbed and relies on chemical products to control weeds. In theory, no-till farming is supposed to increase organic matter and nutrients in the soil and in some cases prevent soil erosion. I dare you to ask a farmer about till versus no-till. You won’t be disappointed. 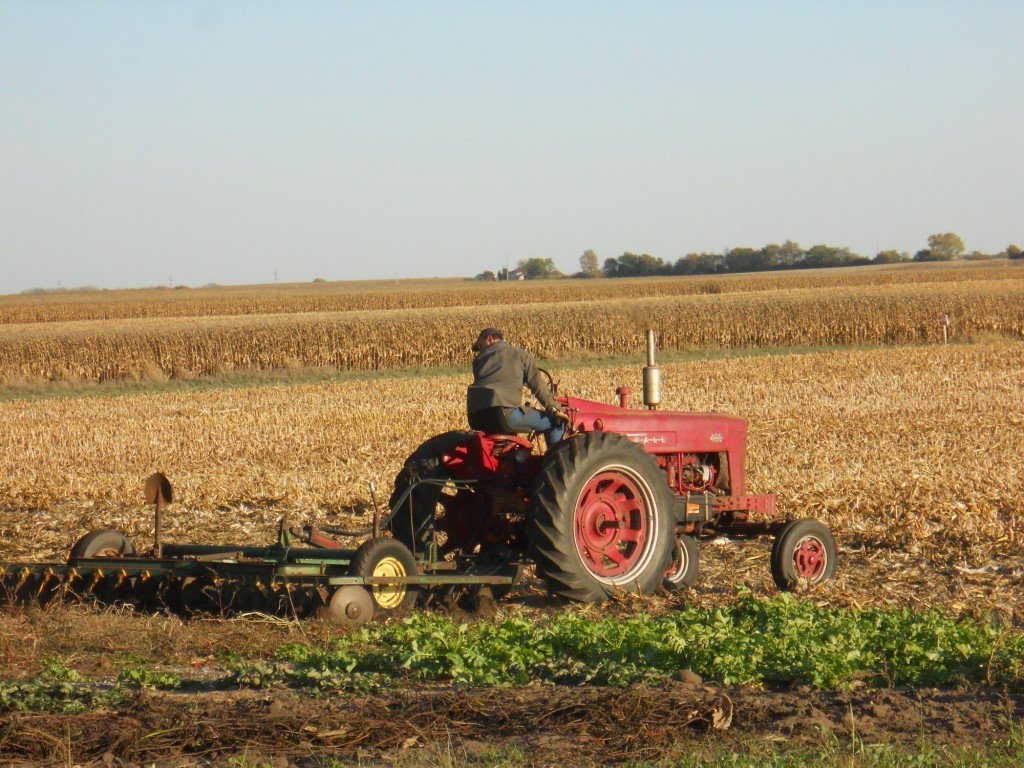 tractor n – Important machinery that helps farmers perform a variety of tasks around the farm. Popular with children and country songwriters.

yield n – Also known as “agricultural output,” yield is the measure of how much (i.e. how many bushels) a crop produces per acre. This is the number farmers toil over and lie awake thinking about. Increasing yields is the goal of every seed company, fertilizer manufacturer, and agriculture support service. It has become the alpha and omega matter in the business of feeding the world.

Photos by the author