Rust Belt Arcana: Tarot and Natural History in the Exurban Wilds
By Matt Stansberry with Illustrations by David Wilson
September 2018

People have used Tarot cards for over 500 years to reveal some hidden information about their lives, their psyches, and their futures. Some people believe Tarot cards may be a map of Jung’s collective subconscious. Others suggest the Tarot conveys occult, esoteric knowledge. Each person projects their own experiences, beliefs, fears and desires on the cards.

In a traditional Tarot deck there are 78 cards – 56 cards resembling a standard playing card deck, and 22 special cards that are outside of the numbered and suited sequence.

These twenty-two cards are known as the Major Arcana. Each of the cards has accrued a set of meanings or associations over time. 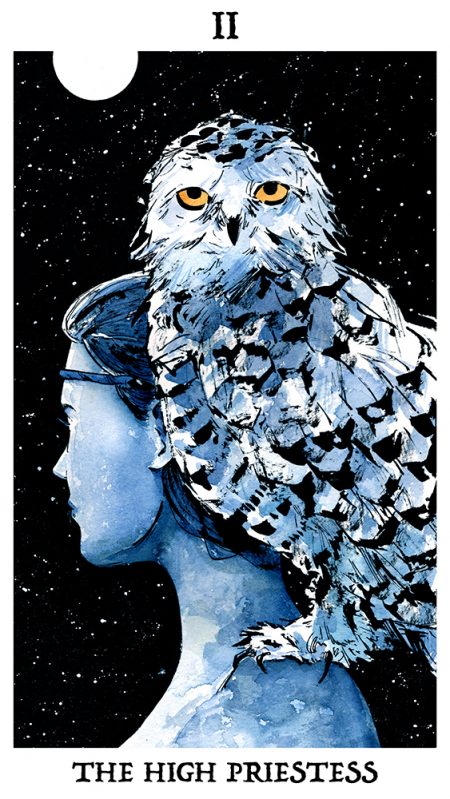 The essays in this book map those divinatory associations and signifiers in the cards to the wildlife of the Rust Belt. These are stories of abundance and loss, the persistent remnant wilderness of the Industrial Midwest. Exploring this natural history helps us to find our place in the landscape, to know our home and ourselves.

The Fool: A young bear is cast off from its mother in the spring to wander a fragmented suburban forest, to raid bird feeders, to be harried by dogs and traffic, chased through golf courses and farms.

The Magician: An ocean-going trout from the Pacific Ocean climbs industrial, sewage-tainted rivers in the Midwest. The river is both sick and healthy, the trout is both wild and made.

The High Priestess: The Snowy Owl seems vulnerable and lost by day, hunts by moonlight on the frozen lakes for seabirds. How will a rapidly warming Arctic affect this raptor’s survival?

The Empress: A thousand-year old plant defies winter by warming its core to 72-degrees Fahrenheit, melting through snow and ice to emit a scent that mimics a rotting corpse.

___
Coming September 2018.
For media, ordering and other requests, please email Anne at anne@beltmag.com.

Matt Stansberry was born in Akron, Ohio. He is a dad, nature writer, and fly fisherman. Find him on Twitter @LakeErieFlyFish. More of David Wilson’s illustration work can be found at dwillustration.com.

Find out more about Matt & David’s publications/additional projects at http://redhorsemag.com.