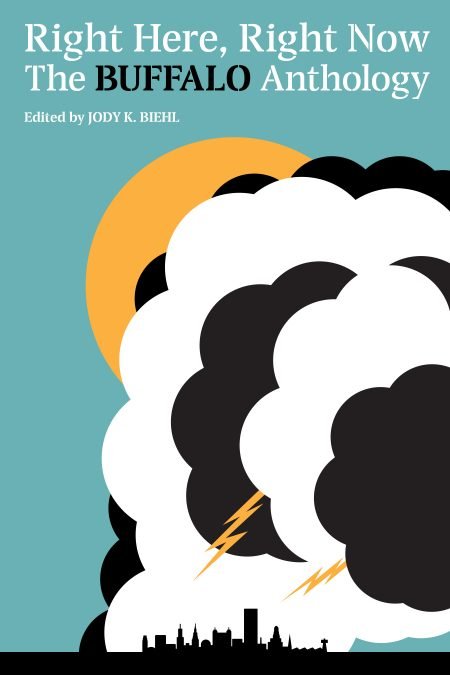 “Absolutely one of the best books about Buffalo ever created. …It offers readers the soul of a secretly and exquisitely soulful city and it offers them generously and often brilliantly.”–Jeff Simon, Buffalo News

“The Buffalo Anthology is as vibrant and full of surprises as the city it celebrates: it is likewise a vast, imaginative construction full of humor and heartache, genius and stupidity, grandeur and decay and renaissance. In this epic and essential volume, as editor Jody K. Biehl writes in her beautiful introduction, ‘Buffalo’s scrappy weirdness endures.’”—Mick Cochrane, English professor at Canisius College and author of Flesh Wounds.

“Not another exercise in blind boosterism, the collection fearlessly notes the dark side of an ethnically and racially divided town, of glory days fading as the tax base evaporates, of history ripped down for the paltriest of motives. Oh, the fond memories of food and fellowship are here too, but they are tempered with refreshing reality. Buffalo on the rise deserves this smart and well-written song to itself.”– Michael Healy, TV executive, movie writer, and producer.

Life in Buffalo means more than surviving seven-foot walls of snow and living with the regret of missed Super Bowl chances. Right Here, Right Now: The Buffalo Anthology captures the city’s old and beautiful bones, the toddling newness of the waterfront, the glow of summer, the chaos and collapse of the school system, the humiliation and reclamation of our water, the pride, loneliness and racism that divides us, and the warmth and resilience that unites us. With a range reaching from fabled stories of the city’s golden years to the impressions and aspirations of newcomers, this book embraces both the cruel and the kind to create a book by, about, and for Buffalo.

Jody Kleinberg Biehl is a former editor for Der Spiegel magazine in Berlin, and director of the journalism program at the University at Buffalo.

Introduction by Jody K. Biehl
Our City, Then & Now
Finding Inspiration in Frederick Law Olmsted’s City, by Lauren Belfer
A City Spoke, by Greg Shemkovitz
Where is Buffalo? by Luke Hammill
Keeping it Real: Slices of a New Buffalo, by Elizabeth Licata
Latte City or Just City: Will Blacks Rise or Be Forgotten in the New Buffalo? by Henry Louis Taylor, Jr.
Pedaling through the Snow, by Simon Husted
Recover the Radials, by Christina Lincoln
Buffalo Grows Up, by John Kordrupel
The Language of America: Stories of Buffalo’s Immigrant Press, by Tyler Bagwell

Tampa Stadium, January 27, 1991, by Marv Levy
Surprise! by Jon Penfold
The Bells of St. Ann’s, by Brian Castner
It Couldn’t Be Anywhere Else, by Perry Nicholas
Taking the Cake, by Maria Scrivani
Run, Bucky, Run, by Justin Kern
Breathless, by Dennis Maloney
Wedding Day, by Elena Cala
Power Lines, by Scott Reimann
Tailgating at the Gates of Hell, by Justin Karcher
When the Prize is Meat: A Look at the People and Inner Workings of a Meat Raffle in WNY, by David J. Hill
Protests at Buffalo State College, by Stan Searl
The Rise and Fall of the Buffalo Mafia, by Lee Coppola

From Buffalo to Washington and the Piano Lessons that Paid Off, by Marcus Joseph Ruslander, Jr. AKA Mark Russell
North Park, With and Without Hate, by Jeff Z. Klein
Back In the Day Remembrances of Black Buffalo from the 1940s and 1950s, by Georgia Burnette
The Rise and Fall of Lackawanna, by Dick Hirsch
Walking Away in Riverside, by Patricia Sweet
I Haven’t Met the Old Woman, in the Knit Sweater
Yet Because Life Is Disappointing, by Cayli Enderton
Manufactured Articles, by Crystal Ockenfuss
A Long Journey: Proud to be Arab, by Sara Ali
Korey’s Story: How I Survived Life on Buffalo’s East Side, by Korey Greene
The Way We Were, by Ronald Wendling
The Lemon Street Connection, by Jennifer Connor

The Armies of the Nightlife: A Requiem for the Wild, the Innocent, and the Old, Weird Buffalo, by Jeff Miers
Down Beat, by Mitch Gerber
Finding the Words We Do Not Have Yet at the Just Buffalo Writing Center, by Robin Lee Jordan
I Am a Buffaholic, by Andrew Z. Galarneau
let love be at the end: Louise Clifton’s literary legacy, by Barbara Cole
Rustling the Leaves in Buffalo: The Story of Talking Leaves…Books, by Jonathon Welch
Epitaph: Buffalo Girl, by Mary Kane
Broadway: A Salute to Urban Markets, by Elizabeth Bowen
Buffalo Artist, by Bruce Adams
John & Mary—Notes & Harmony, by John Lombardo and Mary Ramsey
Music is Art, by Robby Takac
Kleinhans Music Hall, 4:30PM, by JoAnn Falletta

A Hydraulics Boyhood, by Tom Dudzick
My Buffalo Roots, by Wolf Blitzer
The Capital of My Heart, by Erik Brady
Along Came Zeus: How My Dog Helped Me Find Home in Buffalo, by Jody K. Biehl
January in a Jar, by Noah Falck
Tom Toles’ Final Cartoon for the Courier-Express, September 1982, by Tom Toles
First Home, Last Home, by Lynette D’Amico
God is Dead: How about Laughlin’s? by Pat Green Obermeier
Who Would Move to Buffalo? by Kay Patterson
Notes from the Expatriate Underground, by Margaret Sullivan