The Farmer and I: In the Middle of It All

The farmer and I, we married quickly. From our first date to our wedding day, barely four seasons came and went.

We were a lot more like Harry and Sally than I care to admit, which is to say we had known each other a long time and had made a few false starts before we ended up together.

We first met in Chicago during college, dated for a while, then ended up in different cities with diverging plans. Our circles of college friends overlapped, which meant we never completely lost touch.

The newest iteration of our relationship found us on the calmer side of thirty, recasting our lives three hundred miles apart—he in rural Indiana and I on the southwest side of Cleveland. We knew enough about ourselves and each other to know that a life together was what we wanted.

We started discussing dates for a small family wedding in my hometown. It was early spring.

“Well,” said the farmer, “we can either get married in late summer before harvest or after harvest when the ground is frozen and we’re done for the year. March through June is out, too, because of planting.”

I didn’t grasp it then, but these were the boundaries describing the lay of my new land. I was about to marry not only a person but also a line of work, a place, and a way of life. Planning our wedding celebration around the planting calendar was only a sneak preview.

The farmer wasn’t always a farmer. He (Adam) grew up on his family’s farm in rural Indiana, but he and his brother were not an essential part of the grain-growing operation. They were expected to study and play sports and think hard about what they wanted to do in life that wasn’t farming.

After college, Adam was hired by a large bank, which eventually landed him on a trading desk in the middle of Manhattan. The lifestyle, I’m told, was about as unlike grain farming as one can get.

Just a few years into his Big City experience, Adam the bond trader began growing tomatoes on the roof of his fifth-floor walk-up in Hell’s Kitchen. He was spending every weekend biking someplace where he could see the horizon and sit in a patch of uncultivated grass. The landscape and life he hadn’t given a second thought to leaving had begun to call him back.

Was it the farming life that beckoned? Or maybe working at a very large company in the middle of a major credit crisis did the opposite of beckoning. There were other realities to contend with, too: his father was approaching retirement age, and though healthy, stubborn, and strong, he could not carry on the family business forever.

All these things inspired his decision to leave Wall Street to farm corn and soybeans back home in Indiana. It was an unusual decision, unexpected even. But as far as I can tell, it wasn’t capital “R” Romantic. He wasn’t imagining himself in overalls, gazing off into the distance, enjoying the sentimental reverie that only the bucolic can evoke. By switching careers, he wasn’t seeking to do the “good, honest work” often portrayed in marketing for Big Agriculture. He just wanted to work for himself.

When I’m attempting to be pithy in conversation, I say that Adam traded one kind of risk for another. There is the risk of working for a big company that can fold or fire you at any moment, and there is the risk that after you plant the crops, there’s not a drop of rain for three straight months.

To some people, attaching one’s livelihood to the whims of the weather sounds nuts. It’s a variety of nuts that seems wholly different from the hazards that come with working in an intricately structured organization or opening a restaurant.

But risk is risk. We make choices that we think will make us happier.

I say Adam’s decision to come home and farm both was and wasn’t Romantic. It was a move away from the rhythms and energies of city living toward a new arc of life that would look radically different in both the short view and the long.

I would be lying if I said I’ve never caught Adam gazing into the distance, admiring the countryside. We joke about it. We’re self-conscious. He pauses, and then gets back to work.

I was no farmer. I grew up in a suburb of Youngstown, and what little I learned about farming was by accident. We would visit my dad’s relatives in northern Ohio every few summers and play in the hayloft above the barn.

I neither imagined myself ever living a farming lifestyle nor found it unimaginable. The idea was somewhere about halfway down an interminable list of possibilities when I left Youngstown for college in Chicago.

When I met Adam, his rural upbringing was just charming backstory. On our first first date, as we sampled cheesecake in the shadow of the John Hancock Building, he told me about his family and what he and his brother did to amuse themselves on the farm. He repositioned the salt and pepper shakers on our table to help me visualize the baseball diamond in front of their house. Here was home plate and there was second base. He slid the sugar caddy over six inches. Those were the apple trees in right field.

I replied to Adam’s stories with a few of my own. We played home run derby across the street in the cul-de-sac. We caught crayfish in the creek at the bottom of the hill in our backyard.

His joke seemed false the first time I visited the farm. It was midsummer and the corn was high, which created the illusion of slightly rolling topography. When we returned for a weekend sometime after harvest, I saw it: The absolute flatness in every direction. The gridded endlessness that resembled nothing I had ever seen, except maybe the farthest reaches of the parking lot at Cedar Point.

I was guilty of my own gazing into the distance, filing away the scenery for later use in a short story or some other artistic exercise. I couldn’t picture myself there. I didn’t even try. Even if there were a long future ahead for Adam and me, Adam himself was certain to be somewhere else after college. The farm was where he came from, but it was not a place he was likely to return.

Like Adam, my life after college landed me in cities. I enjoyed the breadth of what Chicago, Saint Paul, and Minneapolis offered: the jobs and the social events, the friendships and romances and easy access to airports that could send me off to other places.

Meanwhile, my family in northeast Ohio had begun to seem farther and farther away. I was building a history in Minnesota, but it was not where I was meant to stay.

I moved to Berea—two miles from the headquarters of the Cleveland Browns—and became the caretaker of my grandparents’ house. It had been their home for sixty years. It was where my mother and godmother and uncles were born and grew up.

Adam made many trips to see me in that old house, but we were honest with each other about the future. There was no way to roll up four hundred acres and lay them on Cuyahoga or Mahoning County soil. If we ever wanted to live in the same place, I would have to move.

There were moments that the stakes seemed too high. Not to mention that I had just come back to Ohio to be closer to my family. I wasn’t sure I was prepared to leave again and so soon.

My list of fears was long: What if I hated farm work? What if rural life was too slow for me? What if I ended up feeling isolated, lonely, and trapped? Was I comfortable with banking our financial stability on the price fluctuations of field corn? Was I really about to flush my fledgling writing career down the toilet for love?

To all of that: yes.

We got married in August.

It was either seize that pre-harvest window or ask our relatives to travel during the depths of winter in the Midwest. With the way this winter turned out, we think August was the right call.

We put off our honeymoon until after harvest and the holidays. We left Youngstown just a couple of days after the wedding and got down to the business of settling into our new life. Just about the time my world was returning to right-side up, Adam walked through the back door with a basket of golden pears filled to overflowing.

“Great news!” he said. “The trees are bearing like crazy this year. Wanna can some pears?” 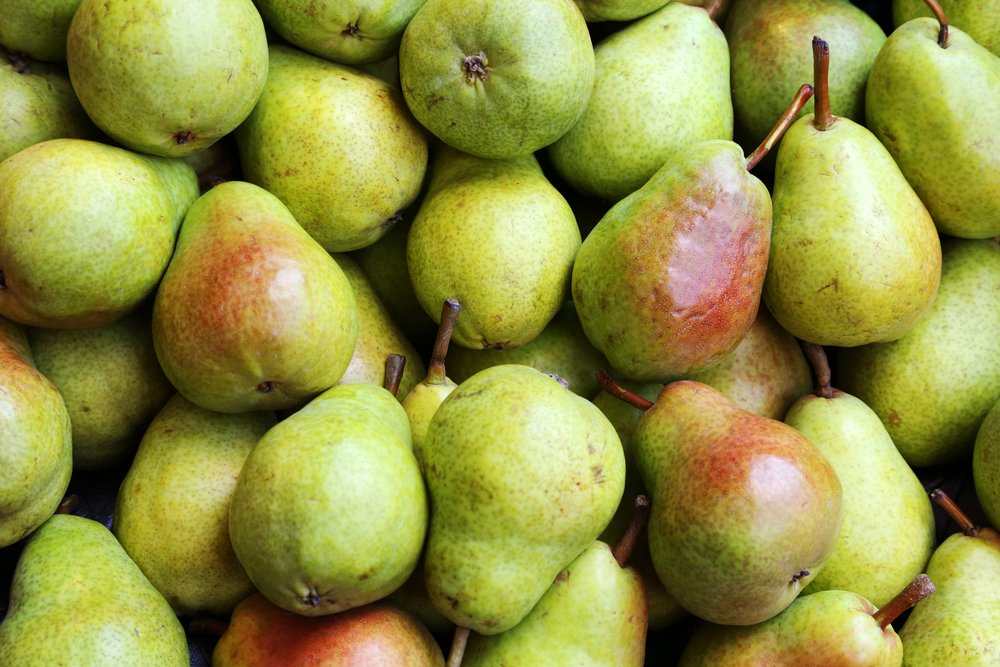 Did I want to can some pears? Did I even know we had pear trees?

Adam pulled a full Tom Sawyer on me. He went on and on about how great the pears would taste in the middle of January and what fun it would be to turn our kitchen into a full-fledged canning operation. Didn’t I want to try this awesome thing?

I fell for it and spent the first week of my new life peeling, coring, slicing, boiling, and sealing jar after jar of fruit. The procedure wasn’t particularly awesome (of course), but admittedly, the outcome was. In addition to the fruit itself, we would enjoy homemade pear liqueur through all ten snowstorms.

The pears were a continuation of a long lesson on the priorities and roles in a farming family. I hadn’t imagined myself being in the kitchen all day every day during my first week of marriage, but the pears weren’t going to work with my schedule. They wouldn’t even wait around for me to make peace with my new identity. They were ready, whether I was or not.

In just a few months, it will be time for pears again. Their arrival will mark the completion of one wild year married to the farmer.

But right now, we have strawberries. Tons of them. I’m mentally prepared for the onslaught this time, ready to observe closely as my mother-in-law teaches me how to make jam.

Gradually, I’m being introduced to the actual crop-growing operation. Adam says he’ll “let me” walk the soybean fields with him and cut volunteer corn—that is, use a machete to whack plants that aren’t supposed to be growing there.

“It’s pretty fun,” he says, “for the first fifteen minutes, anyway. After that, just think about how you’re getting a sick tan.”

I make no promises about where my thoughts will go when I’m out there in the bean plants, wading through their emerald leaves, swinging away with my knife.

I’ll probably marvel how I ended up here, far again from my first home yet closer every day to feeling like I’ve arrived at the place I am supposed to be. We’re in the middle of it all, my farmer and I, with acres of stories behind us and plenty still to come.

Photo of farm by the author.

Photo of pears by Shutterstock/Reinhold Leitner.