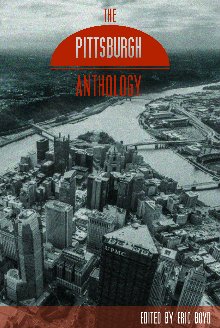 Pittsburgh is ever-changing – once dusted with soot from the mills, parts of the city now gleam with the polish of new technologies. Still, as editor Eric Boyd writes in the introduction to The Pittsburgh Anthology, “Little remnants of the old steel industry are littered across the area. A smokestack here, a ladle rail-car there. But while the shadow of this town’s past is long, it’s not inescapable.” In this book Boyd aims for the surprising, elusive stories that capture a Pittsburgh in transition. Contributors run the gamut from MacArthur-award winning photograher LaToya Ruby Frazier to 15-year-old Nico Chiodi, the book’s youngest contributor, who chronicles the doings of the North Side Banjo Club. “Everyone in this book,” writes Boyd, “is talking about the city, the things surrounding it; all of the pieces have been created with experience, intimacy, and personality. This book, I hope, will speak to you, not at you. Because we all know this city is changing. We’re just not exactly sure what that means.”

Eric Boyd has lived in and around Pittsburgh most of his life and is currently writing a short story collection based in Homestead, PA, called Brownfields. His writing has appeared in, among others, Prison Noir (Akashic Books), Words Without Walls (Trinity University Press), Guernica, The Offing magazine, PEN America Journal, and Fourth River. His blog is at EricBoydblog.tumblr.com.

Praise for The Pittsburgh Anthology

“These voices are varied and quirky, some polished and professional sounding, some a little rough around the edges. But they are uniformly interesting and genuine.” — Pittsburgh Post-Gazette

What editor Eric Boyd has chosen to do is temper all of the Most Livable City rah rah with essays, stories and poems of a grittier, more complex nature …Ben Gwin’s beautifully wrought story dealing with heroin and recovery is one of the finest pieces of writing I’ve read all year.” — Pittsburgh Magazine

“Characterizing a place can be an elusive project, but The Pittsburgh Anthology is a diverse, surprising, eloquent, playful, scrappy, and tenacious effort to capture one city’s “proud contradictions.” — Ploughshares