A Helping Hand, From One Refugee To Another

Dzemal Bijedic knows what it’s like to be a refugee.

He was just a kid when the bombs started falling on the Dalmatian city of Dubrovnik, his mother’s hometown. It was the early 1990s, and Yugoslavia was spiraling into a bloody civil war that pitted the country’s three main ethnic groups – Bosniaks, Croats, and Serbs – against each other. In Bosnia alone, more than 100,000 people were killed. More than two million were displaced. 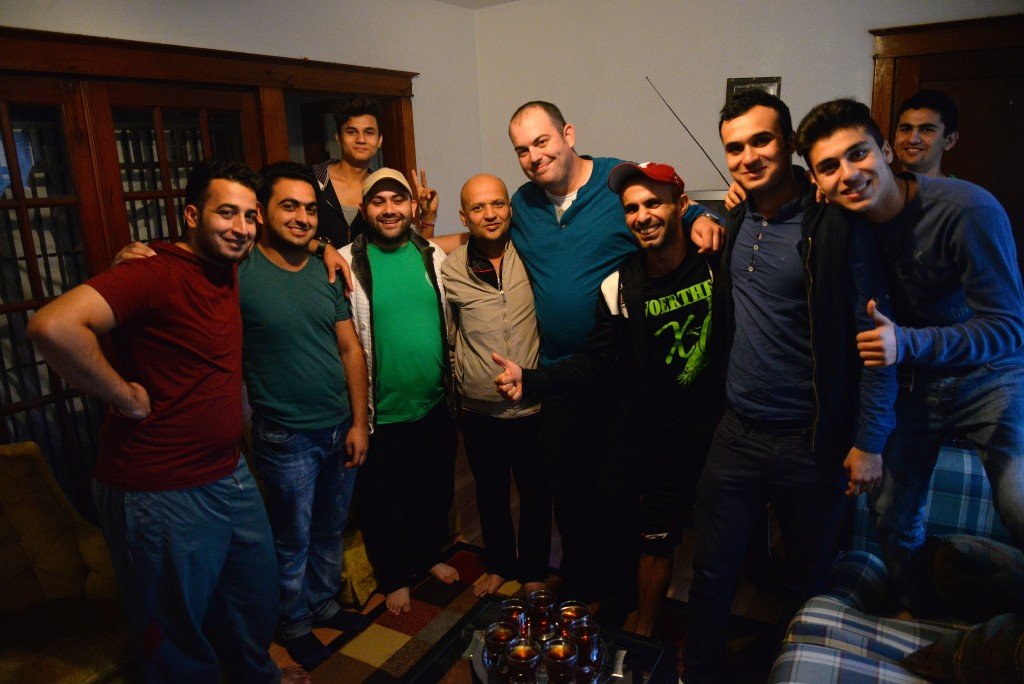 Bijedic and his family were among those two million – and today refugees making their way through the Balkans are echoing the path families like Bijedic’s took two decades ago. Bijedic eventually ended up in Germany, where he remembers being called “auslander” – “foreigner.” In 1997 the family was resettled in St. Louis, along with thousands of other Bosnian Muslim refugees – the beginnings of a community that today numbers around 70,000 people, said to be one of the largest populations of Bosnian Muslims in the world outside Bosnia-Herzegovina itself.

Many in that community have come to see themselves in the stories of refugees from Syria, Iraq, and elsewhere struggling across Europe to safety, and are rallying around those that have already made their way to St. Louis.

Bijedic – who is also St. Louis’ first Muslim police chaplain – has a reputation for charity. Much of his free time is spent volunteering at the Muslim funeral home he helped create or feeding the homeless in nearby places like Ferguson. Now, weekly visits to refugees take up his weekends. More than 30 Syrians have been resettled in St. Louis so far, out of the more than 2,000 that have been resettled nationwide.

Mohamed is one of them. He now lives in St. Louis with his wife, two young children, and other relatives. His youngest – one-year-old Ali – needs back surgery. He and Bijedic, who he calls “Sheikh Dzemal,” speak through the Google Translate app on Bijedic’s phone. Bijedic doesn’t speak Arabic, and Mohamed doesn’t speak Bosnian, or much English.

Bijedic brings them diapers that are donated, and some food. He helped them find furniture, too. 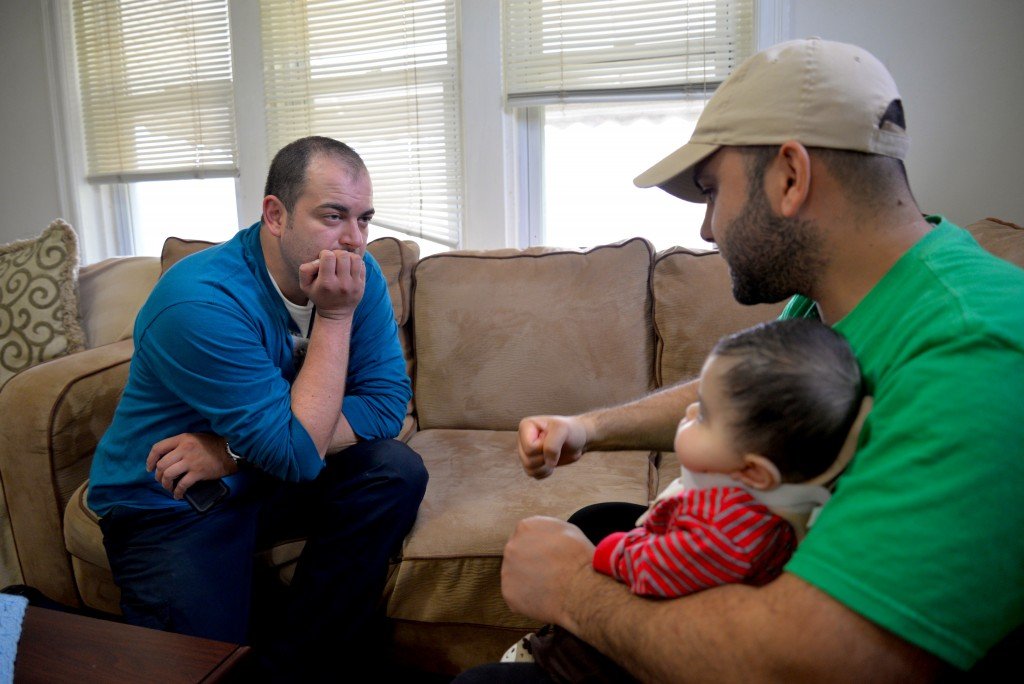 “There were six of us, you know,” Bijedic said after leaving the family’s apartment, recalling the first place his family lived in St. Louis. “And when you come inside, my mom, first thing she did, man, she came to apartment and started crying. Because apartment as too small, and there was one sofa – whatever family members could give us.”

A five-minute drive away, Bijedic finds 28-year-old Dijwar outside his South St. Louis apartment with other refugees who are trying to get an old car running. Dijwar had just finished university when the bombs started falling in Aleppo, where he lived. He fled to Turkey and was resettled in St. Louis this fall.

“He help us,” Dijwar said of Bijedic, who had just brought a box of supplies to Dijwar and his cousin, with whom he lives. “We are the first people from Syria here, and we don’t know anyone. No sponsor.”

Dijwar, who studied electrical engineering, now works at a factory in St. Louis.

“It reminded me of me,” Bijedic says of Dijwar and the other refugees. “I came in ’97. It was one year, first year, two years – it was very tough for us. It took us three years in American to get a car, you know. One car.” 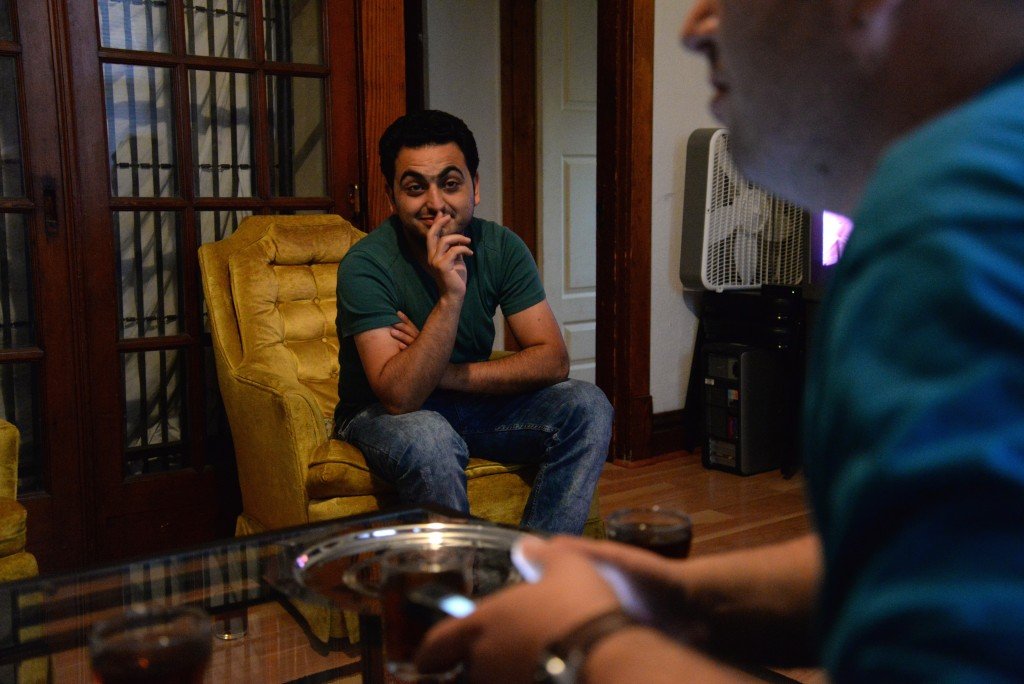 28-year-old Dijwar arrived in St. Louis earlier this Fall. He had been living in Aleppo when Syria was plunged into civil war.

Moving inside for tea, a middle-aged Iraqi man approaches Bijedic. He’s newly arrived and needs a mattress. He’s been sleeping on the floor. Bijedic promises to call him.

Bijedic, chatting with the group over tea, learns that two of the teenagers are going to start high school soon. One will go to the same school he did. College is on his mind. Bijedic promises to call him.

Dijwar and his cousin – who was still in school when he fled Syria – ask Bijedic about how they can enroll in community college. They’ll have to earn new degrees in order to have the jobs they want.

“You call me any time,” Bijedic announces. “All you guys – any time you need help, you call me, okay?”

___
Ryan Schuessler is a journalist based in Chicago. Originally from St. Louis, he contributes to Al Jazeera America, The Washington Post, and The Guardian.