Activism then and now: A talk by Randy Cunningham

The following is an edited transcript of a talk given by Randy Cunningham, author of “Democratizing Cleveland: The Rise and Fall of Community Organizing in Cleveland, Ohio 1975-1985,” at Mac’s Backs-Books on Coventry on August 18, 2018.

All my adult life I have struggling with a dual identity. There is Randy Cunningham the activist and there is Randy Cunningham the writer. These two identities have often been compatible and just as often incompatible. The famous British historian EP Thompson once said that you cannot make history and write about history at the same time. I understand completely what he was saying. Nevertheless, I have decided to attempt to do what he said could not be done and I hope I have succeeded.

Democratizing Cleveland: The Rise and Fall of Community Organizing in Cleveland, Ohio 1975 to 1985 describes a social movement in Cleveland of a size and scale that has not been seen since. At its height the movement was made up of six to eight organizations representing many of the neighborhoods of Cleveland – both east and west side. Each organization typically organized upwards to fifty block clubs in each respective “turf” as the saying went in those days. Each organization employed four to six full-time organizers. The groups tackled issues such as insurance and bank redlining, the use of community development funds, energy issues, and housing issues. The identity of each group usually centered around a issue that made their name and gave them street creds. The organization I was most familiar with was Near West Neighbors in Action, and its claim to fame was the fight against arson in their neighborhood.

All the groups used civil disobedience tactics where they “hit” an offending institution to get their attention. A hit might involve occupying a bank lobby or making an unannounced office or home visit to a recalcitrant official. The zeal and readiness to use hits depended on the history and unique culture of the group in question.

All the groups were run by women, many of whom worked as volunteers and many of whom were directors and leaders of the groups. Women made up many of the most famous organizers in the movement.

Activism is the pulse of democracy. Believe it or not, there have been worse times. The challenges we face can be worked around. We are smart. We can do it. So be of good cheer and keep on, keeping on.

The movement was unique in that it united predominantly white and black neighborhoods in common cause on common issues. This was remarkable in one of the most segregated cities in the US, and a city that had recently been torn apart by race riots in the 1960s.

The movement was one the greatest examples of mass civic and democratic education ever seen in Cleveland’s history. Neighborhood residents, especially women from very traditional backgrounds, who had very little education or experience with activism learned how to speak in public, how to research issues, and how to go toe to toe with powerful corporate and political leaders. For many people it was a life changer.

The movement won many reforms in various issue areas, but the most important accomplishment was to force the city to start to pay attention to the neighborhoods of Cleveland and start to listen to the frequently forgotten and ignored rank and file residents of the city.

The movement was brought to its end when it fell out of favor with local foundations, with the changes brought about by the Reagan administration and the triumph of conservatism in America, and by the departure of leaders and the pulling back of institutions that were critical to its founding. And by what I consider having been a sophisticated counter insurgency campaign to pacify the city in the aftermath of the tumultuous 60s, the insurgent Kucinich administration, and the always raucous and occasionally outrageous community organizations of this era. This campaign resulted in what I consider to be a civic Ice Age that is just now starting to melt.

But my concern today is for a new wave of activism that has bubbled up in our country in reaction to the events of 2016. I got my own start in activism with the Mobilization to End the War in Vietnam in October of 1969. I remember the movements of the 1960s, and I have to say what is going on now compares favorably to that mythic era. However, I see several hazards laying in wait for the activism of today.

First there is the whole issue of foundations and non-profit organizations. I may seem ungrateful since I worked most of my life for non-profits and was paid by foundation money, but in retrospect I consider the IRS rules regarding non-profits to be America’s greatest contribution to the science of controlling and repressing dissent. Foundations have a good reputation as humanitarian institutions, but their real purpose is to allow the aristocracy to set the public agenda, and to decide who will be listened to and who will be ignored. This is hard for a lot of people to swallow. But it must be confronted. Their business is power, not virtue. 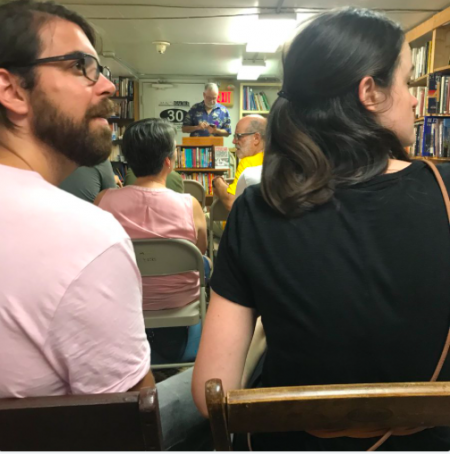 Randy Cunningham through the crowd at Mac’s Backs-Books on Coventry on August 18, 2018. [Credit: Anne Trubek]

But my opinion leaves unanswered the true question. How do you pay for organizing and how do you pay for activism without becoming indebted to the very powers who have created the problems you want to deal with? I don’t know but I do know that donors are owners. Never forget that.

The second great question is what attitude to have towards electoral politics. I come from an era on the left where electoral politics was about as popular as cannibalism. The attitude of the community organizations in Cleveland was governed by their non-profit status, but also by the remarkable belief that you can organize for power while maintaining your political virginity. We seem to be making some progress in this area with the electoral efforts of groups such as the Democratic Socialists of America (DSA), and others who were inspired by Bernie and who left behind the notion that to get involved in electoral politics endangered your immortal soul. But the experiment has just begun so we will see.

Finally, the thing that really goes bump in the night for me. We currently have in this country everything needed for the establishment of authoritarianism. We see dress rehearsals in the Standing Rock occupation and how it was besieged by militarized law enforcement and new high-tech security systems. We see it in how the City of Cleveland sent police out to visit dangerous desperadoes like me during the Republican National Convention. We see it in Ohio Senate Bill 325 that virtually outlaws any activism protesting fracking, pipelines and energy development.  This is an old story that goes back to the founding of the republic. Freedom is not free, and we must constantly fight the never-ending fight to maintain it.

Activism is the pulse of democracy. Believe it or not, there have been worse times. The challenges we face can be worked around. We are smart. We can do it. So be of good cheer and keep on, keeping on.

Standing in the middle of a demonstration protesting Kent State and the war in Vietnam at the University of Missouri in 1970, Randy Cunningham looked around and thought “Damn, this is interesting!” He has been both an activist and a writer about activists and activism ever since. Cunningham is retired from working in the non-profit housing field and lives on Cleveland’s West Side with his wife whom he met in a meeting.  He is a founding member of the Cuyahoga County Progressive Caucus and still considers activism interesting and a source of great stories.