Abandoned Tires Prove Both Blight And Boon For The Motor City

One 2014 morning on Detroit’s northeast side, residents along Mapleridge were horrified to find that 10,000 tires had been stuffed into a row of abandoned houses on their street. The tires were stacked from floor to ceiling, piled in alleyways and jammed into garages. The fire hazard was high, and the disregard for neighborhood safety was disturbing. In the days that followed, community leaders organized a cleanup effort that took 30 volunteers 6 hours to haul the illegally dumped tires onto the curb for the city to pick up.

Tires figure prominently in the lives of Detroiters, and not because they live in the Motor City. There are just so many of them — illegally dumped in vacant lots, stuffed in abandoned buildings, discarded carelessly throughout neighborhoods. Some estimates put the number of tires littering Detroit’s neighborhoods at as many as 1 million. 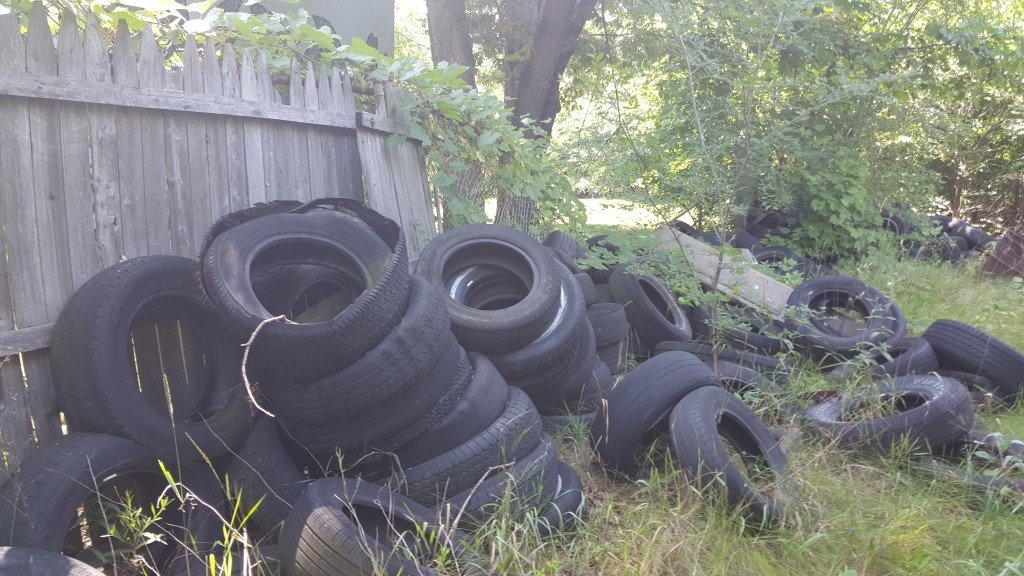 Tires are considered a hazardous material, and as a result, they can cost as much as $2 each to safely dispose of. So it’s not surprising that unscrupulous tire haulers have been using Detroit’s vacant buildings and lots as their own personal dumping grounds for years.

“It tears me up, because we are talking about families,” says Audra Carson, native Detroiter and founder of De-tread, a start-up working to collect and dispose of Detroit’s abandoned tires. “People who aren’t from here or people who are disconnected, don’t realize that even if there are abandoned houses, there are still families living [nearby].”

Carson lists the dangers of abandoned tires in Detroit neighborhoods: piles of tires attract and provide homes for rodents; tires are highly flammable and create fires that are hard to extinguish; tires collect standing water that breeds insects that can carry disease.

Carson is so concerned about tires in the city that she left her two-decade career in corporate Detroit to launch De-tread in 2009. During her first cleanup project, with the Osborn Neighborhood Alliance in October of 2012, De-tread and a team of volunteers picked up 313 tires in less than 30 minutes. 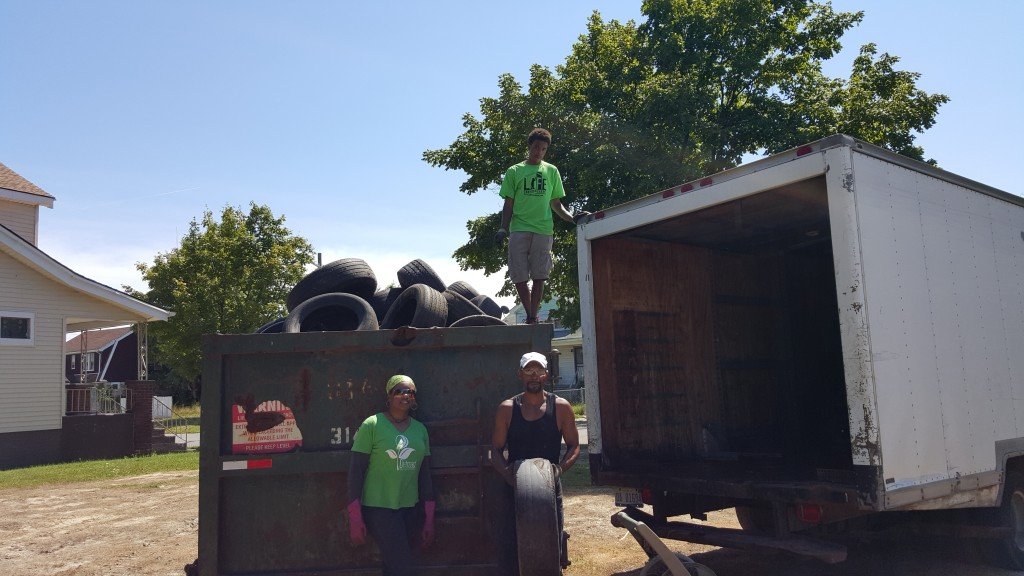 Key to Carson’s strategy is to get the community involved in the actual hands-on challenge of tire removal. For her second cleanup, she returned to Osborn with a grant from the Skillman Foundation. De-tread, along with 50 volunteers, managed to get rid of 2,500 tires, hiring a licensed hauler to take them away and have the tires processed according to the Michigan Department of Environmental Quality standards.

“To be able to make that instant impact in a neighborhood is extremely rewarding,” Carson says.

[blocktext align=”right”]Some estimates put the number of tires littering Detroit’s neighborhoods at as many as 1 million.[/blocktext]Now De-tread is developing products to make from abandoned tires. “Once the rubber is in a certain form it can be molded into anything. Think about sandals, kitchen items. It runs the gamut of what can be done,” Carson says. “Where I want to be is funky, cool. We’re talking about furniture. We’re talking about apparel.” Carson plans to do more than just get rid of tires. She wants to use them to create manufacturing jobs for people in the city.

In another part of Detroit, Reverend Faith Fowler is already using abandoned tires to create jobs for people in her neighborhood. She is the Executive Director of Cass Community Social Services, which runs Cass Green Industries (CGI), a small business that employs people who face barriers to employment — some are homeless, recovering from addiction, or dealing with chronic health conditions.

“The recession was hitting Detroit hard but especially our people in terms of employment,” Reverend Fowler explains. “None of my people had cars so they couldn’t get to where the jobs were, and if they were able to finagle a ride, they weren’t considered because there were so many people who had been laid off of other jobs with great resumes that our folks didn’t stand a chance.” 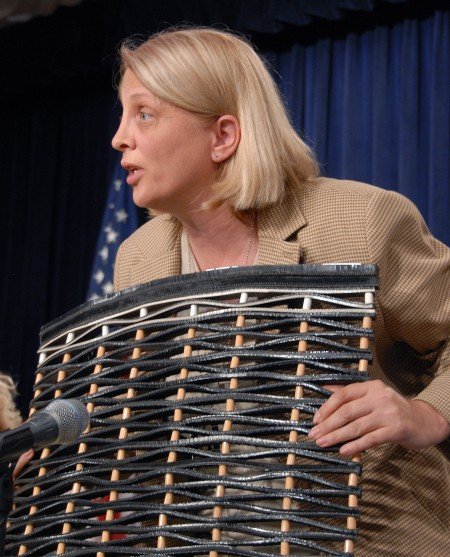 Fowler began to search for a small business idea that would be self-sustaining and cheap to start. When she read an article about woven mud mats made out of recycled tires, she knew she had found the right product for Detroit. “We have tires everywhere,” she says. “Talk about a free resource.”

By employing homeless veterans, ex-cons, or chronically ill people, CGI relies on the talents of a population that is often overlooked. Fowler is proud that some of her employees have used CGI as a stepping stone to full-time, better paying jobs.

To create even more jobs CGI introduced a new product in 2014. Detroit Treads sandals are made out of the tire treads that are left over from making mud mats. The sandals were an instant hit. In the first 4 months CGI sold $82,000 worth of sandals at $25 a pair. By leveraging the power of social media, Cass Green Industries has sold products in every state and in five foreign countries.

Typically Green Industries is lucky to break even. Last year the business brought in $120,000 in sales from tire products as well as coasters handmade from recycled glass. Reverend Fowler points out that the business is there to create jobs, and currently Green Industries employs 20 people part time making $9 an hour. “Not only are they making money, they are making the city better,” she says.

It’s nearly impossible for the city of Detroit — which covers 138 square miles — to keep up with the tire problem. In sparsely populated neighborhoods with rows of abandoned houses, there are just too many places to hide. “These tire companies are looking for an area where there are abandoned homes and a very low population. So they have no eyes and ears watching them,” says Detroit Department of Neighborhoods District 4 Manager and lifelong Detroit resident Odell Tate. 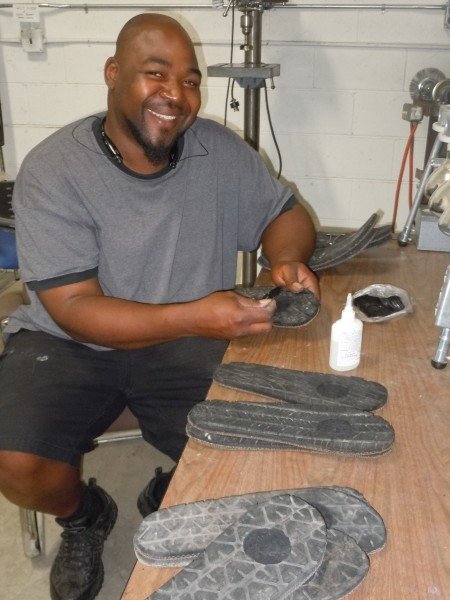 As part of Detroit Mayor Mike Duggan’s “Every neighborhood has a future” initiative, Tate works with community leaders, churches, and neighborhood watch programs to solve the problem of blight in District 4. “We have been very fortunate to have strong community block clubs and associations that radar and monitor tire situations,” he says. Vigilance and community cooperation are the keys to success in Tate’s district, where residents work closely with the police to report any suspicious activity.

In April 2015, the Duggan administration introduced the Improve Detroit mobile app as an easy and convenient way for citizens to let city hall know about problems in the city.  Using the app, residents with smartphones can report potholes, missing traffic signs, and illegal dumping. They can pinpoint the exact location of the problem and even submit a photo.

In addition to eyes on the street, Tate says surveillance cameras would be a good way to find out who is dumping in Detroit. “If we’re able to catch one of the tire companies, and we can make them an example, I think that would put the rest of them on notice,” Tate says. “[The residents] are fed up with companies coming in and disrespecting the neighborhood by dumping tires.”

___
Chris Hardman is the editor of edibleWOW Magazine a quarterly publication that covers the local food and farming scene in Detroit and beyond.