Agony In The Garden: A Lapsed Catholic Ex-Pat’s Field Guide To Our Lady Of Lourdes National Shrine And Grotto

This essay is an excerpt from The Cleveland Neighborhood Guidebook (Belt Publishing, 2016). Order your copy!

Parishes in the Diocese of Cleveland, and other places, have disappeared or combined, as have a number of non-diocesan Catholic high schools and religious communities. But Our Lady of Lourdes National Shrine and Grotto remains, tucked away in southern Euclid as it has been for decades, since long before I passed through grade school at St. William (now Ss. Robert and William) in the ’80s. Its website says, “The Shrine is a replica of the Grotto in Lourdes, France.” I couldn’t tell you how close a replica since I’ve never been to Lourdes, France. “Incorporated into the Grotto are two stones taken from the stone upon which Our Lady appeared in Lourdes. The water from the Grotto flows over these holy relics.” I was really impressed with that back in the day. Two stones from a bigger stone at the French Lourdes made this suburban Cleveland replica just as holy? Sure, why not. It was an article of faith as good as any I’d received. 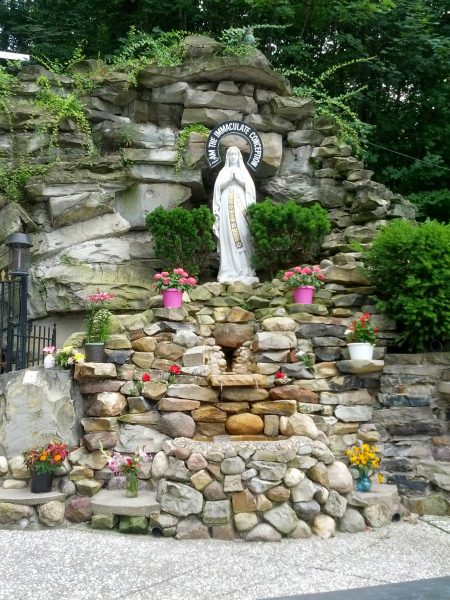 If you’re like me, a lapsed Catholic who prided yourself on the ability to walk into any Mass at any church after years away and still know what to say, when to stand, and when to kneel, only to lose that ability when the Mass changed during your prolonged absence, you needn’t feel bad at the Shrine. Each statue of the Virgin Mary, whether in her traditional veil or in full Queen of Heaven regalia, looks upon you with the same gentle face she had when she stood on the glass-block windowsill of Sister Marian’s classroom. (Everyone who’s been through Catholic school remembers a Sister Marian.) And if the Shrine can offer a sense of tranquility to the pilgrim, to the sick, to the broken (according to the glass display case of testimonial letters, abandoned crutches, and discarded braces), then it can at least offer hope of the same for someone who might not otherwise go back to visit an old parish that might not hold the same meaning it once did. Or that might not even exist anymore.

As you stroll through the outdoor sanctuary, among the weathered fixtures and fittings used for the occasional Mass, seeing the awe on the faces of the statues of the children of Lourdes, you might think you hear whispers of, “You know you belong here, you’ve always belonged here, come home,” from somewhere vaguely over your left shoulder. Ignore it. Just allow yourself to become reacquainted with the iconography and the symbolism, in the meanings that the still-faithful ascribe to the Immaculate Conception and the Sacred Heart. But from a distance. It might not even be that hard. It’s okay. As long as you can at least display the minimum amount of respect your old non-Catholic schoolmates had to, like the evangelical, Muslim, and atheist kids I knew at St. Joe’s (Villa Angela-St. Joseph, by the time I graduated).

This means maybe resisting the temptation to immediately Instagram the sign marked “To Stations of the Cross” posted on a stone arch, pointing to a circular walkway lined with waist high stone markers onto which are carved each of the Mysteries of the Rosary, arranged literally like beads strung along a chain. The ones that stand out to you (for Instagramming later) may depend in large part on your state of mind at the time of your visit. When I was there with relatives after my father passed a few years ago, two lines stopped me in my tracks: “1ST SORROWFUL MYSTERY, THE AGONY IN THE GARDEN.” But keep going, and once you reach the end, having walked past and read over the Joyful and Glorious Mysteries, interspersed with lifesized statues of angels, saints, and children posed as models of devotion, your feelings will probably settle into an equilibrium of sorts. Maybe not one that will send you to your knees (If it does, let it.), but one you probably haven’t experienced since Sister Marian’s classroom. 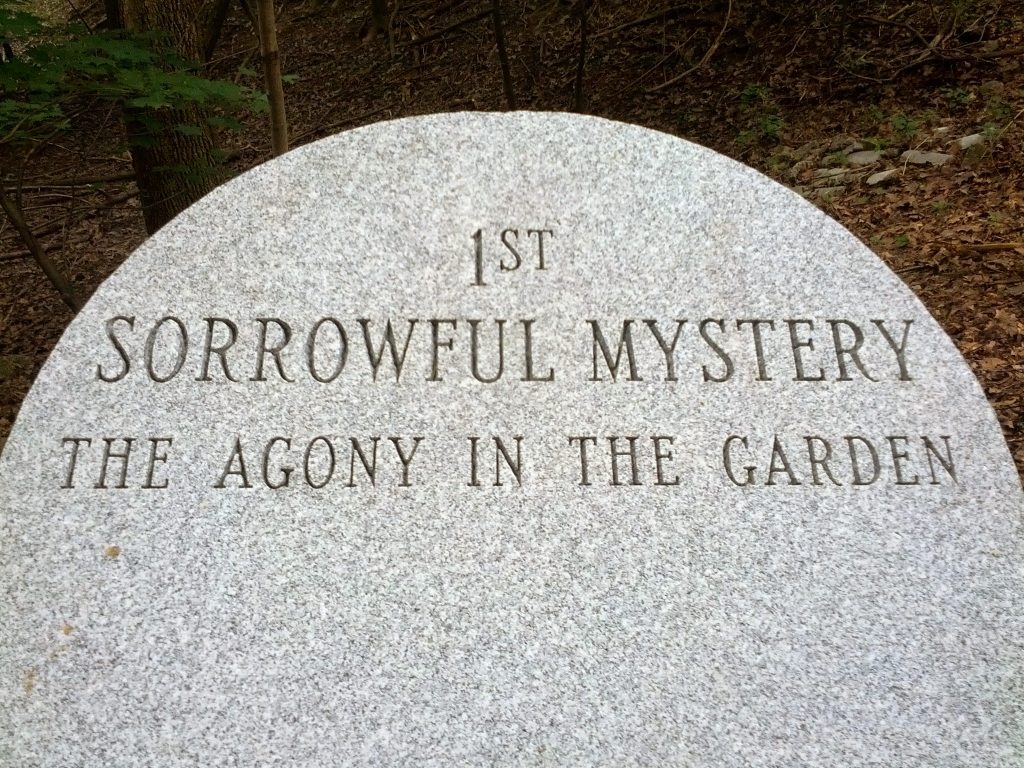 Whether you fit the usual narrative or not — you know the one: the ex-Catholic/ex-Clevelander, who once shook the parish/factory dust from your feet as you moved away to upstate New York or wherever, then came back on a boomerang return arc when you were suddenly knocked off your horse by an epiphany, this realization that you gotta be tough and you in fact have been all along. Because you’re from Cleveland, and Cleveland Rocks, and Alleluia what was once lost is finally found! — come to Euclid and visit Our Lady of Lourdes Shrine and Grotto. Enjoy a bit of peace and quiet in a place where the adage “You can’t go home again” feels for a moment like yet another article of faith that might once have been as good as any you’d received.

___
Don Pizarro grew up in Euclid, Ohio, where he began 24 consecutive years of Catholic education. He turned out just fine and currently lives in upstate New York, where he’s worked for years trying to get a second piece into McSweeney’s Internet Tendency.