“Almost There” Gets There

Documentaries about artists can go wrong in a million different ways. Take John Maloof’s recent Finding Vivian Maier, which is more a film about Maloof’s transformation from a ragpicker into the self-appointed keeper of a dead photographer’s legacy rather than a document of said photographer’s work. Or Exit Through the Gift Shop, a barely-veiled hagiography/infomercial for Banksy and his/her genius. That’s not to say that these and other recent films concerned with artists’ lives don’t have their merits and charms. Only that, increasingly, documentaries seem to be more and more openly self-referential. Perhaps this has always been so, but the recent trend seems to be to dispense with any posture of objectivity or critical distance. 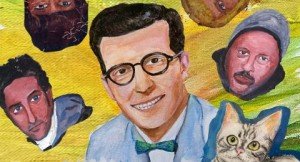 I first heard about Dan Rybicky and Aaron Wickenden’s Almost There a year or two ago. Some eight years in the making, it is the story of their discovery of artist Peter Anton and their involvement in his life. Their early clips depicting Anton’s decrepit Indiana abode and untrained, raw portraits piqued my interest while sounding alarms at the same time. There’s a long history of romanticizing artists and setting them apart from their environment, presenting them as magical beings rather than humans just like their neighbors in almost every way. The artist shouldn’t be set apart any more than a plumber or a doctor should be. The fact that Anton is an “outsider artist” adds the potential for several more layers of mythologizing to the mix. The one thing that our culture loves more than setting creative people apart is building an even taller, more remote pedestal for those we consider self-taught savants. But despite these and other misgivings, I contributed to the filmmakers’ Kickstarter to help them finish their movie.

My contribution was rewarded recently with a limited-time access to online streaming of the film at the same time that it had world premieres in New York and Los Angeles (it premieres in Chicago January 10 at the Gene Siskel Film Center). I watched it three times in one week. It starts at Pierogi Fest in Whiting, Indiana, in 2005. After a montage of the festival’s parade and hallmark pierogi-eating contest, the camera focuses on a homeless-looking man waving his arms to entice passersby to pose for a portrait. This is where Rybicky and Wickenden first meet Anton. The man is a mess, his artwork isn’t especially remarkable, but he’s got an odd charisma — or is it self-confidence, maybe? — that draws people in. Soon the two Chicagoans are making regular visits to Anton’s crumbling East Chicago home.

That home is a major character in the film. Anton lives there from 1941 until the house is condemned around 2010. He moves down to the basement to get away from his domineering mother and stays there as the house falls into greater and greater disrepair. The smell in the basement is so bad that the filmmakers have to return with masks and respirators to be able to spend any significant time inside. The footage they get evokes the geology of a long-abandoned cave, except that instead of stalactites and stalagmites, Anton’s grotto is filled with books, magazines, paintings, and mountains of trash. Mildew forms malignant-looking growths over much of this material, yet the filmmakers persist. 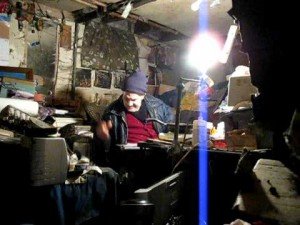 The thing that hooks them more than Anton’s artwork is a pile of scrapbooks titled “Almost There,” which comprise his ongoing autobiography. In them, photographs and drawings are accompanied by graphs, notes, and text to form the kind of crazy-quilt document familiar to anyone with a passing familiarity with the work of other outsider artists like Henry Darger or Martin Ramirez. After trying unsuccessfully to get the books published, Rybicky and Wickenden are able to arrange a collaborative exhibit at Intuit: The Center for Intuitive and Outsider Art in Chicago in which their documentation of Anton’s life will be presented along with the artist’s own paintings. It is in the run-up to the show that the film really distinguishes itself from the run-of-the-mill documentary. This is when it becomes clear that both artist and filmmakers are using the project for their own ends, and the honesty with which this dynamic is presented, warts and all, makes the film a unique document. Anton wants his story told and puts up with Rybicky’s poking and prodding, while Rybicky is obviously taken with Anton because of his own complicated family history and can’t help continuing, no matter what obstacles Anton throws in his path. Wickenden is on screen much less than the other two, but as he’s devoted eight years to the project I have to guess that he has been hooked by Anton’s story for personal reasons as well.

The long-forgotten scandal that drove Anton permanently into his basement seclusion and threatens to derail his resurrection is handled in an even-handed, nonexploitative way. The filmmakers are genuinely troubled by revelations that throw everything they know about Anton into doubt. Yet they’re able to put what he did into the larger perspective of the man’s entire life. So often media depictions of people’s mistakes are portrayed in black-and-white, either-or terms. Here we’re presented with grey areas and nuance. 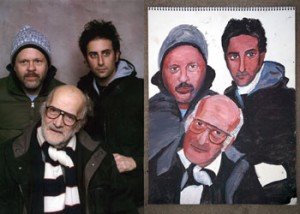 I won’t say what Anton did because doing so might ruin your viewing of this documentary but it suffices to say that he has punished himself in a way no external authority ever could. Many of the participants in the talent shows he hosted for 17 years before the scandal are interviewed and describe a charismatic and kind showman far removed from the broken hermit we see in the film. All he’s got left by the time we’re introduced to him are memories and stacks of materials from the past that threaten to literally bury him alive. The wrecked house is all that he has, yet leaving it turns out to be his only way to salvation.

As wretched and woebegone as Anton may come across, there are also always people that come through to help him. It’s not the unassailable genius of his art that inspires them to help. In fact, the merits of his work are very much up for debate. What makes it compelling — as is so often the case with self-taught artists — is his single-minded dedication. Anton is able to play on the sympathies of those around him, which make him more than just a naif or innocent. He knows how to get what he wants, and once he sees someone’s willing to help he isn’t shy about asking for more. Rybicky gets to a point where he has to start ignoring the many-paged letters of demands from Anton. Yet, undeniably, the filmmakers’ intervention has made Anton’s life better. Toward the end of the film Anton comments on how bad his life had become in that basement while looking at some of Rybicky and Wickenden’s photographs. It’s a beautiful acknowledgement of the way that these three people’s involvement with one another has changed all their lives.

We want so badly for artists to be geniuses whose lives we can only dream of emulating. Almost There paints a different, more down-to-earth picture. Art is rarely made in a vacuum, no matter how remote or isolated the artist’s environment is. It is also a searing portrait of postindustrial Indiana as it attempts to resurrect itself after decades of neglect. Just as Anton has to leave the wreckage of his past behind, so the Rust Belt — brilliantly evoked in the film by David Schalliol’s environmental cinematography — must find some new way to grow, prosper, and move forward. If the final shots of Anton showing his paintings at a local library and teaching his neighbors art in their retirement home are any indication, perhaps the area has some reason for hope as well.

Dmitry Samarov was born in Moscow, USSR, in 1970 and immigrated to the U.S. with his family in 1978. He got in trouble in 1st grade for doodling on his Lenin Red Star pin and hasn’t stopped doodling since. He graduated with a BFA in painting and printmaking from the School of the Art Institute of Chicago in 1993 and upon graduation he promptly began driving a cab — first in Boston, then after a time, in Chicago — which eventually led to the publication of his illustrated memoirs Hack: Stories from a Chicago Cab (University of Chicago Press, 2011) and Where To? A Hack Memoir (Curbside Splendor, 2014). He paints and writes in Chicago, Illinois. He no longer drives a cab.