The Best of Belt Year One

With the one year anniversary of Belt Magazine upon us, it’s a perfect time to pause and take a look back what a whirlwind the past 365 days have been. What better way to look back than to compile some of our favorite stories into a “Best Of” print anthology? Below is the introduction to that book, which publishes on October 22 and is available for pre-order now.

When Belt Magazine launched one year ago, we did so for one basic reason: We felt that Cleveland and other cities in the Rust Belt were being defined by outside media that didn’t know us. We wanted to tell our own story ourselves.

So we assembled writers, engaged citizens, academic experts, history buffs, and all sorts of people who live and work here to write about who we are. Some of our stories are long-form investigative journalism, some are essays about the arts and historic preservation, and many are thoughtful commentaries about economic issues. Quite frankly, we are proud of how we have progressed in the past year, engaging people who are interested in issues that matter.  Visitors to our site continue to increase, and the number of people who support us by becoming members keeps growing. People join Belt to be part of a community and to acknowledge our commitment to pay writers, to edit carefully, and to have an independent voice. 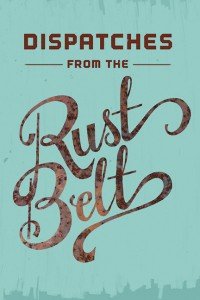 We believe strongly in our business model. We want our readers to feel that they are a part of what we publish. In return, we feel a connection with them that is personal, meaningful, and sustaining. Our readers are not anonymous analytics or numbers.

This anthology comprises the best pieces from Belt’s first year: there is work from experienced journalists who recognized early on the importance of what we were doing — Laura Putre’s graceful, literary coverage of politics and the arts, Dan McGraw’s vital investigative pieces, Ted McClelland’s in-depth feature on Buffalo’s waterfront, and Gordon Young on urban homesteading. There are also pieces from newer writers who found a voice with us — Amanda Shaffer’s “Busing: A White Girl’s Tale” received national recognition.

We started out heavily Cleveland-centric and expanded into the further reaches of the Rust Belt as the year went on — we’ll continue to tell more and more stories from across the Rust Belt, with a special love for Cleveland since that’s where we’re based.

We look forward to the coming year of more stories, investigations, interviews, and essays — to critically examine the Rust Belt region of the United States, a place deserving of our honor, our criticism, and our undivided attention.

Support paywall free, independent Rust Belt journalism — and become part of a growing community — by becoming a member of Belt. To purchase Dispatches From The Rust Belt: The Best of Belt Year One please click here: http://bit.ly/1rrOjkB