How the Cleveland Browns’ Black Players Changed the NFL

The following is adapted from an excerpt of LOST CHAMPIONS: Four Men, Two Teams, and the Breaking of Pro Football’s Color Line by Gretchen Atwood, used with permission from Bloomsbury Publishing.


When the All America Football Conference launched in 1945 it sought well-heeled owners to go head-to-head with the more established NFL. Mickey McBride, owner of Cleveland’s AAFC franchise, tapped Paul Brown to be its head coach. Brown wasn’t McBride’s first choice — Notre Dame’s Frank Leahy was — but hiring Brown ensured a built-in fan base given his deep Ohio roots.

According to the coach’s autobiography, Paul Brown immediately contemplated signing black players. The Los Angeles Rams signed Kenny Washington on March 21, 1946. That same month Cleveland’s black weekly newspaper, the Call & Post, reported that Bill Willis, who had starred for Brown at Ohio State, was up for a role on the new squad.

When weighing signing Willis, Paul Brown worried that publicity from the move could hurt Willis’s performance or distract the team, and he loathed distractions. To avoid such complications, Brown later wrote, he planned to ask Willis to try out after training camp was already in progress.

He didn’t tell Willis about this idea, however. By the time Brown reached out to Willis, the ex-Buckeye had verbally agreed to play for the Montreal Alouettes, an expansion team in the Interprovincial Rugby Football Union, a forerunner of the modern Canadian Football League. Brown persuaded Willis to stop by Cleveland’s training camp in Bowling Green en route to Québec.

[blocktext align=”right”]“He had a crouch almost like a frog. He was spring-loaded in that position.”[/blocktext]At least that was Paul Brown’s version. Stories differed on what exactly brought Willis to Bowling Green. Paul Brown claimed Willis contacted him and Brown told the middle guard to stop by camp on his way north. Willis’s sons say that their father did contact Brown that spring or summer, but not about a spot on the team. “He had no inkling that would ever happen,” said Clem Willis, one of Bill’s three sons. According to him, his father was applying to be head football coach at Wilberforce University and wanted a letter of recommendation from Brown. Only after a Cleveland-area sportswriter nearly goaded Willis into trying out did he decide to stop by the Browns training camp.

The evening Willis arrived in Bowling Green, Brown convinced the lineman to stay, saying, “I’ll stake my reputation that you’ll be able to make our team.” The next day, August 6, Bill Willis stepped into a scrimmage against Cleveland’s starting offensive line. The middle guard’s primary role, like that of a modern nose tackle, was to disrupt running plays and occasionally pressure the quarterback.

Across the line of scrimmage from Willis stood NFL veteran Michael “Mo” Scarry, who had played for the Cleveland Rams before they moved to California. Willis dug his cleats in the dirt and planted both hands on the ground, like in a sprinting stance but lower, head up. “He had a crouch almost like a frog,” Clem Willis said. “He was spring-loaded in that position.” The two men stared at each other across the line of scrimmage. At the snap Willis blew past Scarry and sacked quarterback Cliff Lewis. The whistle blew, and the players unpiled and walked back to their positions.

Scarry shook his head and lined up again. He put one hand on the ground and wrapped the other around the pigskin. After snapping the ball he stepped quickly to block Willis, but the middle guard was already at his hip. Scarry lunged and weakly redirected Willis, who charged into the backfield to take down Lewis again. Scarry jabbed the ground with his cleats and scowled. The third time Scarry snapped the ball he got his hands up faster, but Willis ducked under them and knifed into the backfield. The whistle blew. Scarry pointed at Willis: “He’s going early.”

Willis, walking back to the defensive side of the ball, stopped. The other players also stopped, unsure what to make of this accusation. They looked at the veteran Scarry and then the newcomer Willis, who stood with his hands on his hips and a practiced blank expression on his face. Even the players going through separate drills yards away paused to look over. 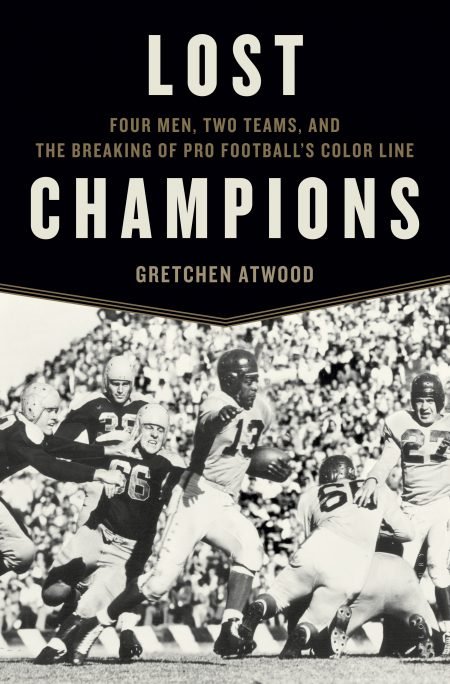 Coach Brown walked into the scrimmage. “Run the play again,” he demanded. He positioned himself down the line of scrimmage and crouched. The linemen sank into their stances. Seconds later they exploded at each other. Scarry struggled again. Brown didn’t look up. “Again,” he said. He had the play run several more times with similar results. Brown stood up. He looked at Scarry, then said to the group, “He’s not offside.”

The lesson was one that Browns’ opponents would learn all too well. For years afterward, whenever a new referee called a Cleveland game, one of the Browns coaches would suggest the official watch Willis carefully because many people thought he was offside when he wasn’t. When Brown asked Willis how he got such a quick jump, Willis explained: He went when he saw the center’s fingers tighten around the ball.

Practices continued, and a week later Paul Brown invited Marion Motley to try out. Motley was a six-foot-two fullback and linebacker who, like Willis and many of the new Browns, had past ties to the head coach. When Brown coached the Massillon High Tigers in Ohio, Motley had played for their archrivals, the Canton McKinley Bulldogs. After high school Motley briefly played for South Carolina State, then followed his former high school coach to the University of Nevada at Reno. He joined the Navy in 1944 and was sent to Great Lakes Naval Training Station. There he was recruited to play on the base football team, coached by none other than Paul Brown.

Great Lakes was where Coach Brown tinkered with many of the new ideas he had for the game, including updating the modern T formation offense. In Motley he had the perfect multiskilled player to make his version of the T work. Motley was not only talented but also huge by the standards of the era. Motley so intimidated other players with his size and power that when future Minnesota Vikings head coach Bud Grant arrived at Great Lakes as a nineteen-year-old would-be fullback, he took one look at Motley and switched positions to end.

Motley quickly adapted to Brown’s flavor of the modern T offense and led Great Lakes to a 39–7 victory over Notre Dame. Motley had planned on returning to college in the fall of 1946 but instead came back to Canton, Ohio, to work in a steel mill to support his family.

[blocktext align=”right”]The staggered quarterback stance was one of many ways large and small that the Cleveland Browns, and particularly their black players, changed modern football.[/blocktext]When Motley heard that Paul Brown was going to coach the Cleveland Browns, Motley wrote him asking for a tryout. Brown replied that he had enough fullbacks. Why did Brown change his mind and invite Motley in August? Maybe other fullbacks got injured. Or, as Motley suspected, perhaps Brown wanted a black roommate for Willis. Or Brown simply changed his mind. In any case, Motley was on his way to Bowling Green.

Shortly after he arrived, so did rookie quarterback Otto Graham. The former Northwestern star missed the beginning of training camp because he had been in Chicago for the College All-Star Game. Upon arriving, Graham had to contend with Willis. “Our backfield coach was curious to see how I’d handle a hard-charging defense and especially Bill Willis,” Graham said.

According to the talk around camp, Willis had jumped clear over Scarry at one point to tackle quarterback Cliff Lewis. Graham didn’t know whether to believe that, but as he lined up, he tried not to let Willis distract him with his shifting from one center gap to the other. Scarry hiked the ball. Graham turned his hips, stepped back, and hit the ground, followed by an avalanche of bodies.

In an effort to get a jump on Willis, Scarry had retreated so quickly that he had stepped on his quarterback’s foot. Because of Willis’s speed, Coach Brown realigned Graham’s stance, changing it from parallel and square behind center to staggered, with his left foot farther back than the right. This also helped Graham get into his drop faster. The staggered quarterback stance was one of many ways large and small that the Cleveland Browns, and particularly their black players, changed modern football.

___
Adapted from an excerpt of LOST CHAMPIONS: Four Men, Two Teams, and the Breaking of Pro Football’s Color Line by Gretchen Atwood, used with permission from Bloomsbury Publishing. © Gretchen Atwood, 2016.