Buildings and Food: Walnut Way is Transforming its Milwaukee Neighborhood Brick by Brick, Crop by Crop, and Porch by Porch

They sling a mean Reuben at Jake’s Deli on the corner of W. North Avenue and 17th Street on Milwaukee’s north side. That iconic sandwich, arguably the best in town, hasn’t changed much since it was first slung in 1955. Everything else on that stretch of North Avenue, and in the surrounding Lindsay Heights neighborhood, has changed a whole lot in those 60 years.

The Lindsay Heights that Walnut Way Conservation Corp. co-founder Sharon Adams grew up in during the 1950s and 1960 was a vibrant community, ethnically and economically diverse, bustling with activity — a place where neighbors sat on the porch and looked out for each other.

“It was a thriving business and social district,” Adams says. “There was a large department store, the Sears block, there was a natatorium and a library, so it was full of social and economic development.” 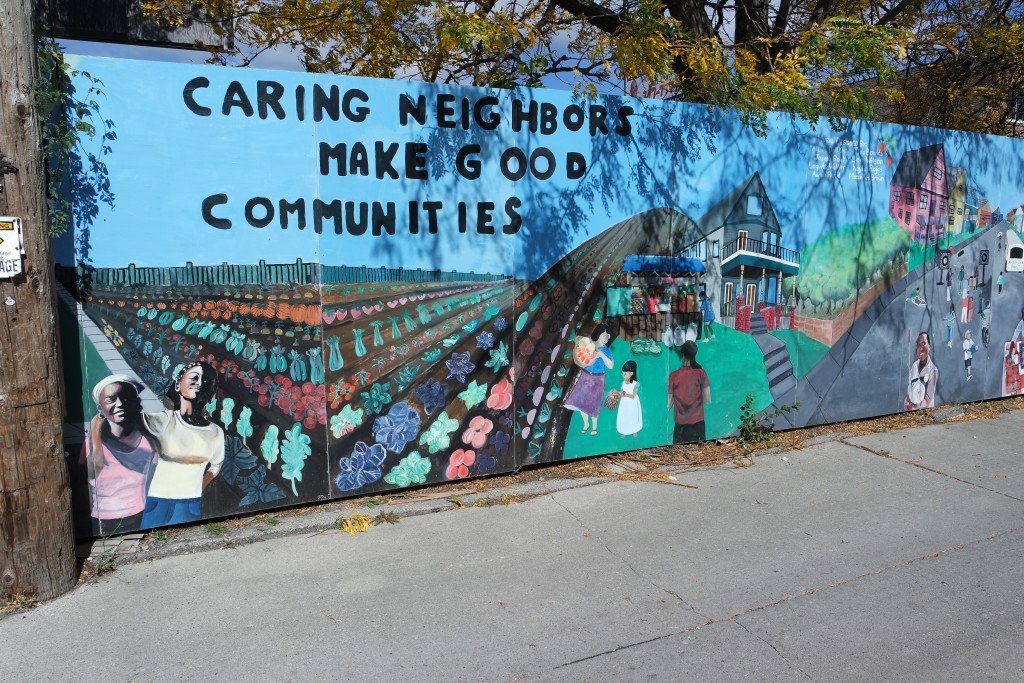 But by the 1990s, the area was riddled with vacant lots, deteriorating houses, and empty commercial spaces. When Adams returned to the neighborhood in 1997 after a 27-year absence during which she got a master’s degree in social work and directed Girl Scouts councils in New York and Detroit, she barely recognized the place. Housing was a mess, there were no jobs, and drugs, crime, and garbage were filling the vacuum created by so much abandoned property. She and her husband Larry recognized that it would take a holistic approach to breathe new life into the neighborhood they loved. So they created Walnut Way. 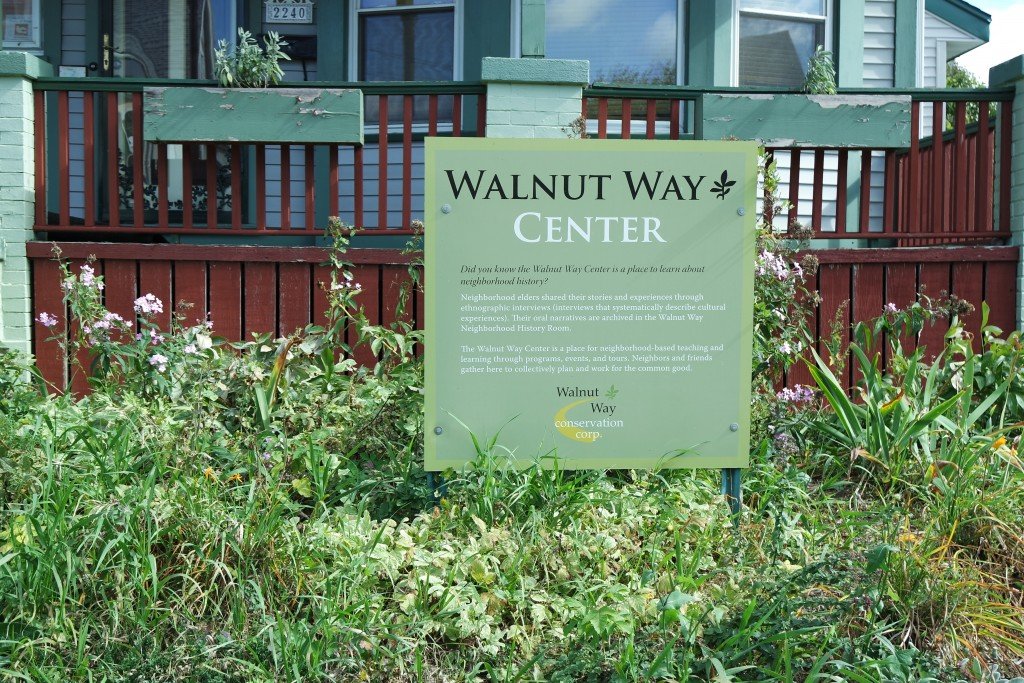 No neighborhood initiative alone can fix the damage that half a century of disinvestment and bad public policy have inflicted on inner city areas across the Rust Belt. Poverty and unemployment are still incredibly high in Lindsay Heights: about 40% of neighborhood residents live below the poverty line, and the unemployment rate hovers around 20%. Median household income is well below $20,000 a year. But thanks in part to the efforts of Walnut Way, crime is down, investment is up, middle class families are trickling back in, and the honey is flowing, literally. Little by little, change is happening.

Like most neighborhood revitalization initiatives, Walnut Way started with housing. Upon her return to Milwaukee, Sharon Adams settled back into the house she grew up in, and soon met and married Larry. When the city scheduled the dilapidated drug house across the street for demolition in 1998, the Adamses decided to buy it and rehab it instead. That former drug house eventually became the Walnut Way headquarters. 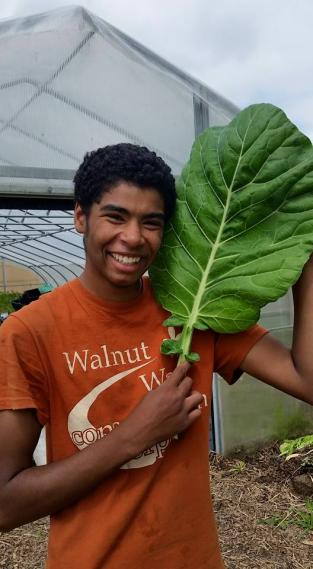 Dismayed by the debris dumping and drug dealing taking place in the neighborhood’s many vacant lots, Sharon and Larry started turning them into parks, gardens, and orchards. They got neighbors involved the old-fashioned way: porch to porch, face to face. They had neighborhood barbecues. They forged solidarity through an oral narrative project in which they collected the stories of residents’ lives, work, and beliefs with the help of a cultural anthropologist at the University of Wisconsin-Milwaukee. In 2000 they officially established Walnut Way Conservation Corp. as a 501(c)3 nonprofit, with the mission to “sustain neighborhood well-being through community organizing, property restoration, and economic development.”

Before long, Sharon and Larry were partnering with the Wisconsin Housing and Economic Development Authority to restore or build more housing. That partnership attracted investment over the next several years from community banks and other financial entities. The Zilber Family Foundation, whose founder Joe Zilber, like Adams, grew up in Lindsay Heights, made Walnut Way one of the lead agencies in its 10-year, $50 million Neighborhood Initiative. Since the creation of Walnut Way, 65 new homes have been built in the neighborhood.

But what sets Walnut Way apart from so many other neighborhood reclamation projects is that they didn’t stop with housing. For community development organizations that do focus almost exclusively on housing, sometimes things don’t end well. Take, for example, the case of West End Development Corp., a nonprofit with a 30-year history of developing affordable housing on Milwaukee’s near west side. In 2001, West End acquired a rundown 95-year-old building in a distressed neighborhood not far from Walnut Way, and sank nearly $1 million in Community Development Block Grant funds into an attempt to convert it into condos, affordable rental units, and retail space. They couldn’t sell the condos, and the organization suffered through frequent leadership turnover and other management issues. With the real estate market in free fall and the project still not completed, West End went under in 2008. 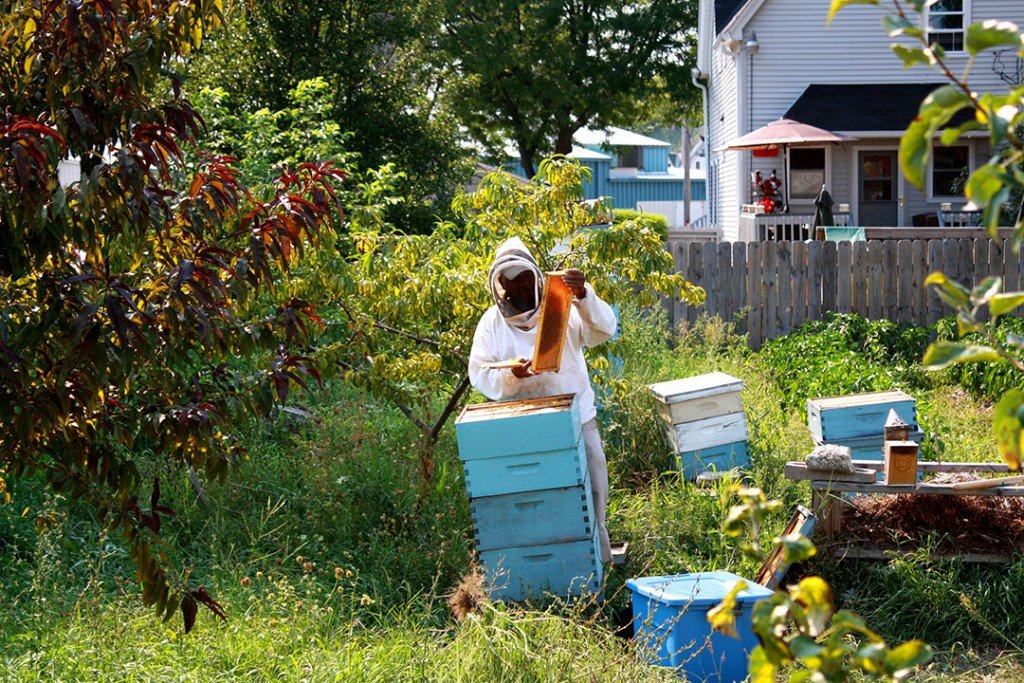 At Walnut Way, in contrast, everything is rooted in a comprehensive view of what a healthy community should look like. It starts with the very name of the organization.

“‘Conservation’ was a very intentional choice of word,” Adams says. “It is how we choose to live our life and design our communities, so everything Walnut Way does is at core related to conservation in its broadest sense of stewardship.” In other words, this broad interpretation of “conservation” applies to more than environmental sustainability; it is the lens through which Walnut Way approaches everything from job training to youth engagement. It is about conserving the very fabric of the neighborhood.

[blocktext align=”left”]”‘Conservation’ was a very intentional choice of word. It is how we choose to live our life and design our communities…”[/blocktext]That first summer, a corps of volunteers started growing flowers in the newly installed gardens, which they sold to raise money. The Adamses partnered with urban agriculture guru Will Allen of Growing Power to teach neighborhood residents how to grow food. Larry Adams became an expert beekeeper, and Walnut Way started selling honey by the gallon. In recent years, Walnut Way has taken on stormwater management, including the installation of 40 rain gardens, three 500-gallon cisterns, and a bioretention basin. Today, when you stroll southward on 17th Street from North Ave., you don’t see piles of trash in the gaps between houses; you see crops. When you walk out of Jake’s Deli and look across the street, you see a food co-op instead of an empty building.

Ideas about land use also underpin Walnut Way’s approach to chronic unemployment. Noticing that most of the neighborhood men had lawnmowers, Walnut Way launched Blue Skies Landscaping Employment and Training Services, an enterprise that provides residents with jobs and marketable skills, brings in revenue, and in a few cases has even spun off new businesses. The landscaping operation has become adept at installing parks, and counts major hospitals and Marquette University among its clientele. 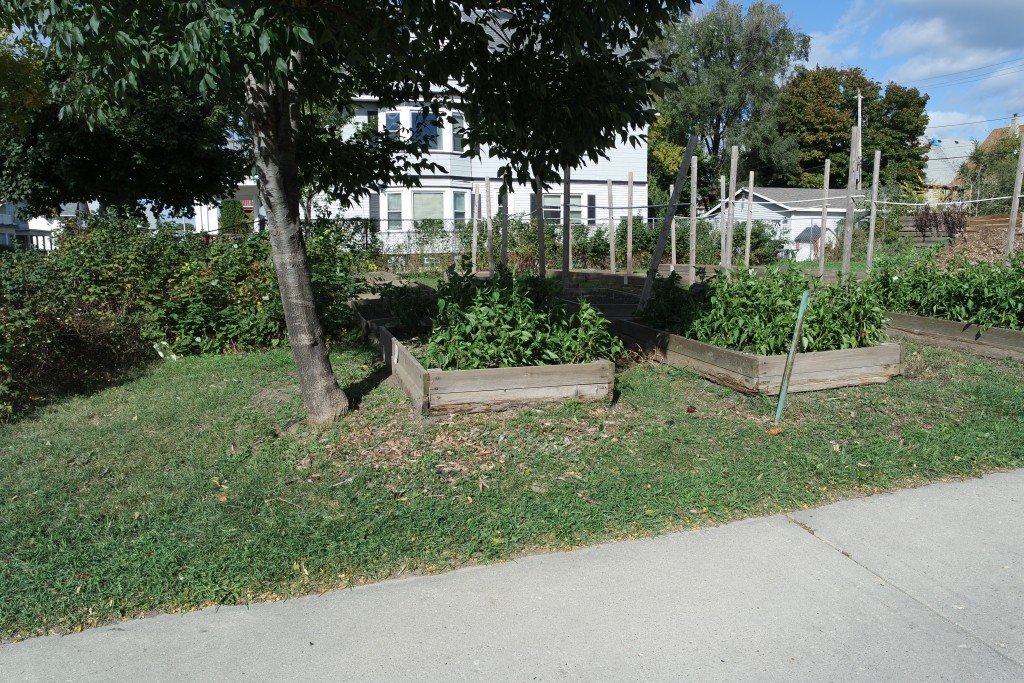 The rise and fall of Lindsay Heights is an all-too-familiar Rust Belt story. The neighborhood was first settled by German immigrants in the late 19th century, and had a large concentration of Eastern European Jews by early in the 20th. It became a hub of African American life and culture in the 1920s with the arrival of thousands of blacks from the South. The name came later, honoring community activist Bernice Lindsay, who led the North Side YWCA in the 1930s and 1940s and is often referred to as the “mother of the black community.”

The neighborhood’s decline started with the construction of I-43, the highway that connects Milwaukee with Green Bay. The interstate gashed this once-thriving neighborhood, resulting in the demolition of over 1,500 homes and 250 businesses. The decline picked up steam through years of redlining and ill-conceived urban renewal projects, and festered via the loss of thousands of manufacturing jobs and the disappearance of private and public investment in the area. The result was a disconnected, resource-poor neighborhood trapped in a quagmire of poverty, unemployment, crime, drugs.

The impact of that isolation and disinvestment is reflected in the physical and economic health of the people who live in Lindsay Heights. Adams notes that the neighborhood suffers from epidemic proportions of chronic illnesses — premature deaths, infant mortality, diabetes, obesity. “Those are facts, but there are stories connected to those facts,” she says. “And as we talk to each other, we find out that some of it is education and awareness, the factors of healing that are needed when you live in an isolated community and opportunities are not only not obvious, often they’re not here. We think about what that does to our mental and physical selves.”

Walnut Way is trying to boost community health on several fronts. One key piece is education. There are food and juice workshops, healing circles for women, and a men’s wellness council, all of them promoted via word of mouth, social media, and, of course, porch to porch. 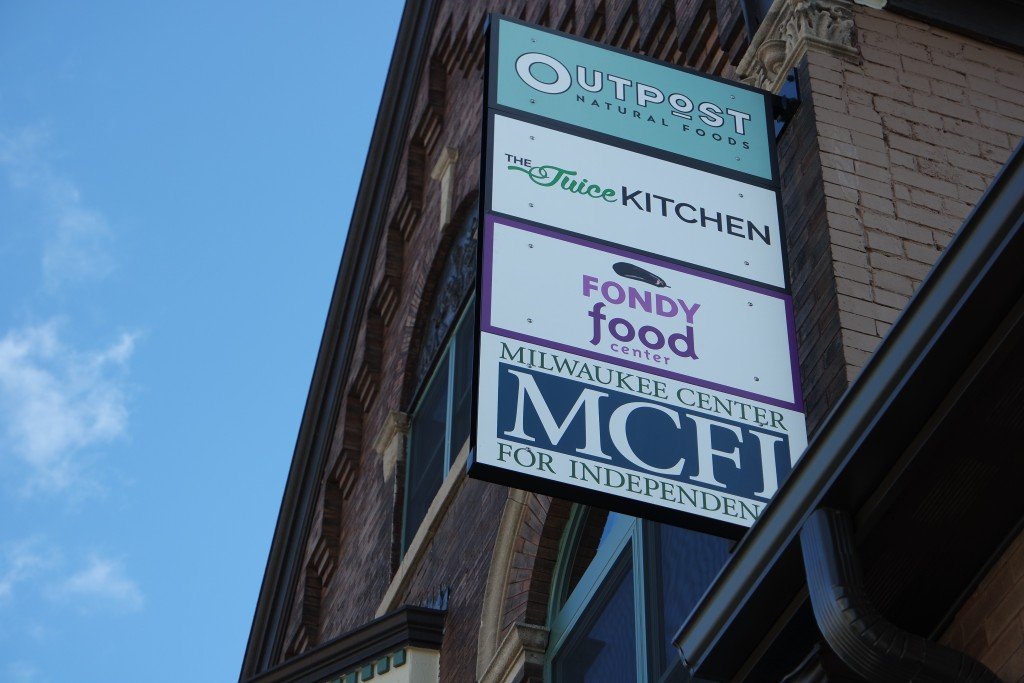 Another critical approach is intertwined with Walnut Way’s economic development efforts. Last January, Walnut Way broke ground on Phase I of what is perhaps its most ambitious project yet, the Innovation and Wellness Commons. Phase I is a food hub and commercial kitchen in a completely revamped building on North Ave. around the corner from Walnut Way’s 17th Street headquarters. Tenants of this “healthy food oasis” include Milwaukee Center for Independence, Fondy Food Center, The Juice Kitchen, and a new branch of Outpost Natural Foods co-op. The Outpost store opened for business on October 14, and the whole facility celebrated its grand opening on October 30. Phase II, a new building to be constructed next door, is still being developed, with the hope of breaking ground next year. Potential tenants include a job training program and health and wellness practitioners.

[blocktext align=”right”]“I want people to consider this area a destination, a place where people choose to live, to work, to visit, to shop.”[/blocktext]While the Commons has the potential to catalyze additional economic development, Adams recognizes that it is a tiny piece of a very daunting puzzle, and there is a long way to go before Lindsay Heights becomes the vibrant commercial hub residents envision. “Over 50% of our commercially developed area is vacant and blighted,” Adams notes. “We did a market analysis and found that $40 million leaves this community every year, basically because there is no place to spend it.”

The task of assembling the rest of the puzzle will fall to the next generation of Walnut Way leaders; both Sharon and Larry plan to ease out of their current roles in 2016 — and a celebration of Sharon’s “transition” is scheduled for December 21 — but they hope to remain actively involved in their “encore” years.

“I want people to consider this area a destination, a place where people choose to live, to work, to visit, to shop,” she says. “So how far along are we? We obviously have a ways to go, but I think we know the way.”

___
Bob Jacobson is a freelance writer who grew up in Detroit, spent his young adulthood in Chicago, and has lived in Madison for the last 20 years. He is a regular contributor to Isthmus and the author of Ole Evinrude and His Outboard Motor and Les Paul: Guitar Wizard, both part of the Wisconsin Historical Society Press’s “Badger Bios” series for young readers.