From Carpet Cleaning To Urban Living: The Forty-O-Five Place

Don Hallum called Ohio City his home years before the breweries settled in, and decades before foodies flocked to West 25th Street for Sunday brunch. He moved to the neighborhood on Cleveland’s near west side in 1978, at a time when the buildings that house some of the present-day city’s most popular shops and restaurants lay vacant, their windows boarded up. Then, it was far from a happening place for suburbanites to gather on weekends, let alone an attractive base for out-of-towners exploring the city. Now, he and his wife Julie host guests from around the world in what used to be the headquarters of the West Side Carpet Cleaning Company.

Hallum rents out the first floor of the building, which he lists as “The Forty-O-Five Place,” through Airbnb.com. Upon arrival, visitors are struck by the airy, modern feel of the living area – and the white baby grand piano sitting just inside the front door. The wood floors and exposed brick walls in the bedroom are original; the Ping-Pong table and koi pond out back are Hallum additions. A grid of ducts and pipes floats high above the immaculate galley-style kitchen, which comes stocked with fresh fruit and a Keurig coffee maker.

When the couple purchased the Bridge Avenue building just four years ago, “it was pretty well left in shambles,” according to Hallum. The carpet cleaning company had vacated the property in the late 1990s, after nearly 70 years in business there. 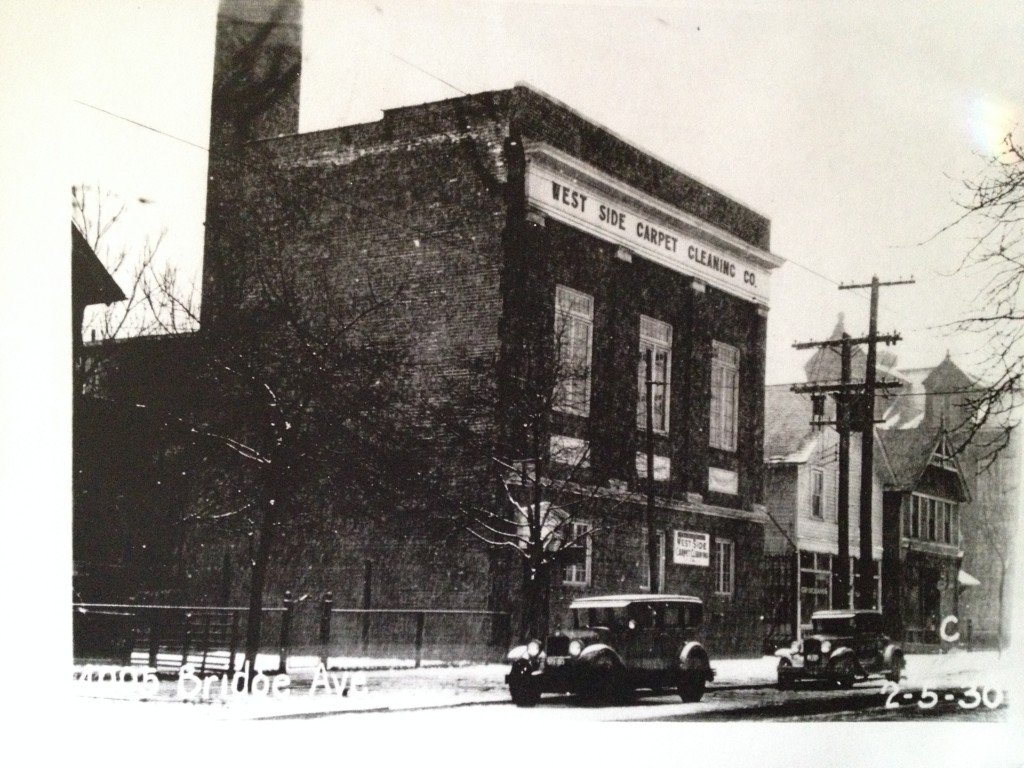 The company’s founders established West Side Carpet Cleaning around 1894. Within five years, new owners relocated the business to Bridge Avenue, where it would eventually occupy the block where the current building now stands. The new plant opened on October 20, 1929, four days before the stock market crash. The building was purported to triple the business’s daily capacity, a promising sign for an already profitable, popular enterprise. Owner Frank Volk claimed that there was “not a finer or more efficient plant in the middle west.”

However, the city of Cleveland, like many heavily industrialized urban centers, found itself at a tipping point. While the overall population continued to grow up until the 1950s, suburban sprawl was already underway in the ’20s and ’30s. Those who could afford to move, moved farther away from Cleveland’s oldest neighborhoods and industrial districts to newer homes in the suburbs. In his 1931 demographic study of Cleveland, Howard Whipple Green observed that the Near West Side held one of the city’s highest percentages of joblessness and concentrations of people supported by public relief programs.

But the West Side Carpet Cleaning Co. survived the Great Depression and white flight to the suburbs. In 1950 the manufacturing industries still provided the majority of the city’s jobs, with 42% of Clevelanders working in this sector in 1950. The carpet cleaning business appears to have thrived during World War II and the recovery years that followed; in 1958 Frank Volk’s son, Donald, built an addition that Hallum now refers to as “The Green Monster” atop the original brick structure. This expansion housed a conveyor system that allowed for increased automation and efficiency. On the first floor, carpets were washed and then attached to rollers that carried them past the second floor and across the Green Monster, where Volk installed three large, high-powered furnaces to quicken the drying process. After drying, the conveyor brought them back down to the first floor to be rolled and shipped out.

The Hallums currently live on the building’s second floor, which includes the drying room West Side used prior to the addition of the Green Monster. The cavernous 20-foot-high space occupies more than 1,000-square feet. The pulleys that workers used to raise the carpets up to be dried by two massive hot-air blowers still hang high above Hallum’s kitchen and living room.

That a commercial entity like West Side Carpet Cleaning could survive more than a century of economic ups and downs, changing consumer preferences, employee unrest, skyrocketing gas prices, and competition from rival businesses is a testament to the minds and attitudes of its proprietors. Seventy years later the building still stands, showing few external signs of its age. The interior, however, has been completely repurposed thanks to Hallum’s grit and good timing.

The Forty-O-Five Place is not the first Hallum overhaul in Ohio City. When he moved to the area in 1978 after a one-year stint in Hawaii, he lived out of a trailer. The following year, he sold the trailer and used the money to put a down payment on a rooming house on the corner of West 32nd and Clinton Ave. Rooming houses, also known as flophouses, were ubiquitous in Ohio City at the time. Hallum purchased the 55,000-square foot building and the house in the adjacent alley for $22,000. Each of the eight rooms then rented out for $45 a month.

Housing was cheap, primarily because many of Ohio City’s former inhabitants had moved to newer, more spacious neighborhoods, farther from Cleveland’s industrial core. Despite the efforts of the Ohio City Redevelopment Association, established in 1968 to curb structural and social decay, upwards of 10,000 residents moved out of Ohio City between 1960 and 1980. The exodus of more than 40% of the population left more than 1,000 vacant homes. The majority of the remaining residents were Appalachian and Hispanic migrants who arrived in Cleveland during World War II in search of manufacturing jobs. By 1970, more than 20,000 Appalachians lived on the Near West Side and often settled for lower-paying, unskilled positions. These were Hallum’s neighbors and tenants.

Indeed, the neighborhood’s crime rates in the 1970s and ’80s were higher than those of Cleveland as a whole. Hallum recalls a particularly heart-wrenching encounter with a young neighbor carrying a baby. “Is that your sister?” he asked her. The girl replied that the infant was her daughter and that she, an 11-year-old mother, was uncertain of the father’s whereabouts. The economic and social conditions wore him down, and when he left Ohio City in 1983 to attend bible school, he planned never to return. But two years later he found himself back at West 32nd and Clinton, now with Julie in tow.

“The only way I can say it is I got love for the people in the city. In my heart, I came back a different person,” he says. “At that time, we began looking at what we can do in the city to help people.”

It was during this time neighborhood development began to pick up. Great Lakes Brewing Company opened its doors in 1988 on Market Avenue, and while the commercial spaces around West 25th remained largely uninhabited, the housing market showed signs of life as other individuals started buying up inexpensive, dilapidated properties.

“These were pioneers in my mind, as far as people going in and renovating homes,” Hallum says. “It was their way of getting a start in life. Like I did – I had to buy something cheap, put sweat equity in it, and live in it in the process.” He and his wife lived in the renovated rooming house until 1994, when they purchased and moved to the former Clinton Bar building next door.

In 2004, he left his position as pastor at the local Christian Fellowship Foursquare Church to pursue a master’s degree in divinity at The King’s University in Los Angeles. It wasn’t until he and his wife saw the ad for the West Side Carpet Cleaning building online, that they decided it was time to return to Cleveland.

They came back to a different community. Ohio City had evolved into an urban neighborhood not only appealing to visitors, but where young artists and professionals might want to live. A few blocks and a few decades removed from Hallum’s $45 flophouse rooms, the Forty-O-Five Place now goes for $135 per night on Airbnb.

The idea to host on Airbnb came to Hallum after a 2013 trip to Kansas City for a conference in which all potential hotel rooms were booked. After a nightmarish experience with sticky floors and unclean bathrooms, Hallum swore that his guests’ experience would reflect only excellence. Excellence, in this case, requires four hours of cleaning after each guest departs, but it does pay off: the Forty-O-Five Place is booked 75-80% of each month. In comparison, Cleveland’s hotel occupancy rate for 2013 was 61.4%, which is about the average across the country.

What’s the draw? The space, for one. Hallum says a lot of his guests gush that “it looks more beautiful in person than in the pictures.” They also love staying at such close proximity to downtown, and within walking (or biking) distance of Ohio City’s evolving restaurant and retail scene. Conventional options for lodging in the neighborhood are limited: the three bed-and-breakfasts (Clifford House, J. Palen House, and Stone Gables) combined have a maximum occupancy of about 40 people. The Cleveland Hostel, opened in 2012 on West 25th Street, supplies another 60 beds in a mix of private and shared rooms.

Hallum believes that his success is also due to the fact that the Forty-O-Five Place attracts a different kind of traveler than one comes across at a hostel or traditional hotel. “These people, this is their destination, for the most part. They’re here for a purpose. Very rarely are people coming to stay while they are on their way to some place else,” he says. Some guests claim that they are just tired of hotels.

The increasing appeal of urban living has brought an influx of young professionals and families to Ohio City, but will they be willing to invest their time and money, as Hallum has? He has seen the demographic landscape change, from the “sweat equity” pioneers to those who buy the finished product, and who are not necessarily skilled at or interested in maintaining. Now, he’s looking to the future, with plans to renovate the Green Monster — it’s currently used as a driving range, but he has designs to convert it into a basketball court, perhaps ringed by an indoor track. And then, perhaps, he’ll be done. After decades of devoting himself to the neighborhood, he hopes to rent out the entire building so he and Julie can travel, leaving the next phase of Ohio City’s evolution in someone else’s hands.

Amanda Bates is a freelance writer who grew up and still lives in Cleveland’s western suburbs. She studied history at The College of Wooster and journalism at Ohio University. On her blog, mandibleblog.com, she reflects upon (and sometimes rants about) her two favorite subjects, travel and food.