When Cleveland Became a “Convention City”

In June 1924, thousands flocked to Cleveland as visitors and delegates to the 18th Republican National Convention. The newly-built Public Auditorium echoed with speeches and rousing patriotic tunes led by John Philip Sousa. Outside, salesmen hawked elephant figurines and women held signs emblazoned with the name of the presumed Republican nominee and current president: Calvin Coolidge. Clevelanders clustered around speakers set up in the Arcade while listeners throughout the country tuned in from the comfort of their living rooms to experience the first national party convention that was broadcast over the radio.

The official guide to the 1924 convention declared that Cleveland was “humming with industrial activity; teeming with business enterprise and progressiveness; mindful always of maintaining its proud record of civic accomplishment; ever careful of the health, comfort and recreation of its people and every inhabitant a booster of his city.” The city was the fifth largest in the country, and “second to none in the possibilities for future growth and expansion.”

The possibilities in Cleveland were a perfect fit for the relatively young Republican Party. 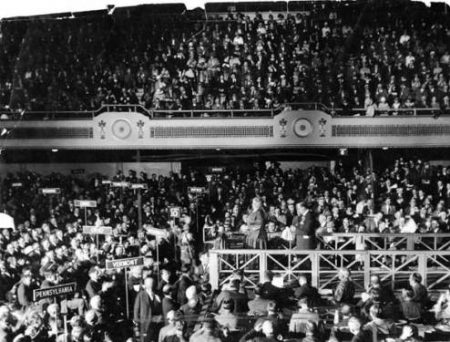 Supporters of women’s rights, too, hoped that the convention in Cleveland would further their cause. The campaign for women’s right to vote predated the founding of the Republican Party, but women’s representation in the national party had been scarce.

Women had gained the right to vote in 1920 with the ratification of the 19th Amendment. Yet the Plain Dealer noted “it was evident that, with few exceptions, the women were attending their first national party convention.”

But what a first national party convention to attend.

The faces of delegates inside the Public Auditorium looked markedly different than those at the Republican convention in Chicago four years earlier, when only twenty-seven delegates were women. In 1924, 120 women were delegates, with 277 serving as alternates.

Not only were women better represented as delegates, the national committee passed a measure that required each state and territory to be represented by one man and one woman, doubling the committee in size. While convention-goers in Cleveland celebrated this requirement as a triumph for women’s rights, it was rescinded a mere 28 years later.

Yet, women delegates made the most of their time at the convention in Cleveland. They gave speeches seeking the party’s support for issues ranging from temperance to peace. 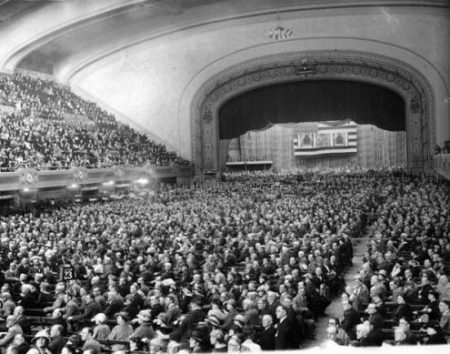 When Florence Collins Porter, a member of the Woman’s Christian Temperance Union and a former crusader for women’s suffrage, gave a speech seconding the nomination of Calvin Coolidge, she paved the way for other women to follow in her path.

While women delegates sought to create change inside the auditorium, Cleveland businesses sought to capitalize on the new market of women delegates once the sessions ended for the day. Businesses sprinkled their advertisements with artfully-sketched elephants holding umbrellas alongside descriptions of women’s shoes and silk chemises. Newspapers declared that women had to bring home “something from the convention.”

They might have been attending their first national convention, but the Plain Dealer wrote that “they were interested. They were interested in political talk and in the colorful scene about them. After the chairman’s gavel had brought the convention to order, these women were all attention. Politics seemed to come to them naturally.” 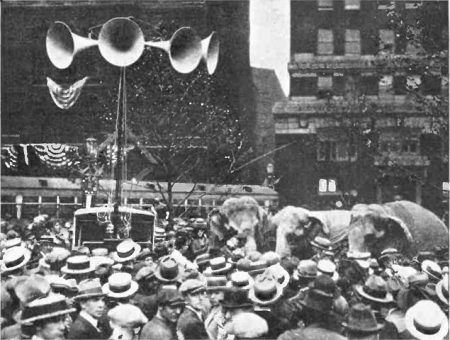 Crowd outside the 1924 Republican National Convention in Cleveland listen to speeches broadcast from inside the hall via an early “public address system.” From a 1924 issue of Popular Radio magazine.

President Coolidge was the undisputed nominee. The vice-presidential nomination was less clear. As the delegates voted to nominate Frank Lowden of Illinois as vice president, the weary attendees, many suffering from the ailment of “convention feet,” made their way back to their hotels to pack and head home. Lowden declined the nomination, the only vice-presidential nominee to do so, and the delegates were herded back to the Public Auditorium for an emergency evening session. The trains were held at the station.

Just before midnight on June 12, the delegates, having nominated Charles G. Dawes as vice president, shuffled to their trains and sped off into the night.

Reports after the convention praised Cleveland for its successes as a host city. The gleaming Public Auditorium was well-suited for the job. Accommodations, which organizers had worried might be too few, were actually in surplus during the convention. All went according to plan. The Republican National Committee declared that “Cleveland is fast becoming one of the most popular convention cities in America.” And, in 1936, twelve years later, the Public Auditorium reopened its doors, and the RNC came to Cleveland again.