The texts poured in; my phone buzzed off the edge of the hospital bed nightstand. It chimed in the passenger side cup holder, chirping from Elko to Oglalla. It broke the suburban night with dings and blips from the kitchen counter. In answer to all of the above, I texted back: Cleveland.

Cleveland did not begin as the answer to my problems. It began as home. And I, and my story, began as far away as I could get. 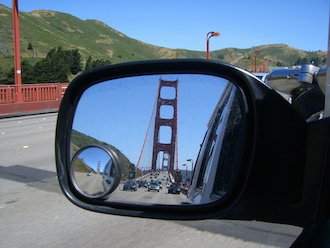 I-80 sighs into the sand at Ocean Beach in San Francisco. And so too, did a cross-country road-trip I took half a decade ago. I had set out from Brooklyn, station wagon riding low with clothes and books and bikes. Detroit, Omaha, Cortez, Abiquiu, Vegas. Then the Transamerica rose like a polite finger, butting in: ahem. I stopped and I stuck around. It was easy at first. The city insists upon its own beauty: each walk has a hill, it seems, and each hill a new vista. I spectated and swooned. I felt like a tourist all the time, in good ways and bad. Rootless, just passing through. A city to look at is not a city to live in.

I spent a lot of time in a gardening store in an industrial part of town near the Bay. It was my office, kind of, a chair and side table under a palm tree by the back fence. They sold succulents in tiny pots that didn’t need any water, and ferns in blown glass baubles that lived on only air. I never understood how that worked.

I’d ride home into the wind, fighting gusts of sand and dirt. I’d spend mornings on my roof, watching the clouds move. Weekends I’d camp in hammocks on the beach, up all night in the cold sea breeze. They say San Franciscans are flaky and fidgety and you can’t blame them when the wind and fog makes any anchor rattle its chains. How can you stay grounded in a city like that?

[blocktext align=”right”]My first stop in Cleveland was my parents’ basement. I crutched downstairs and breathed the fecund air. Hot and wet, things grow here. The west smolders in drought but Cleveland, the forest city, blooms green.[/blocktext]But I’m getting too poetic. Let’s come down to earth. Riding through the Presidio I got hit by a car, skidded into a guard rail, flipped into the trees, and woke up in an ambulance with a broken pelvis, cut spleen, bruised ribs, and no memory of the previous half hour. The trauma unit gives patients code names when they come in. I was patient Xerox. My helmet was cracked and bloody but I was alive and didn’t need surgery. I’d be OK, but it’d take a while.

Everyone had advice. Bone broth. Yoga. No one recommended Cleveland. But living on roofs didn’t make sense when I couldn’t walk up stairs. So I drove home. I made one final stop at the bulk bins at the organic grocery store, turned left out of the parking lot, merged onto 80, and headed east. The Transamerica slumped back into the ocean.

Living in California, when people learned I was from the midwest they’d ask what season I missed, always assuming it’d be the fall. Really — I missed summer. That air. Flying home it hits like a punch when the plane door opened. Driving, San Francisco’s fog ended at the Central Valley, the desert stopped when we turned south out of Cheyenne, and then when the plains opened up, green green green all the way home through that sticky, summer haze. I rolled the windows down and lolled like a happy dog. My first stop in Cleveland was my parents’ basement. I crutched downstairs and breathed the fecund air. Hot and wet, things grow here. The west smolders in drought but Cleveland, the forest city, blooms green. 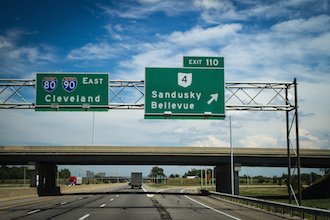 Is Cleveland the fifth borough? The last stop on the L train? No. It’s harder to buy liquor here, for one thing. Fewer coffee shops. And there is no L train. People talk about maker culture. But that strikes me as a coastal thing, where you’re asked what you do, not who you are. That’s a short-term identity: programmer one day, pickler the next. But the Midwest runs a longer timeline. There’s a prairie idea called proving up, declaring ownership of your piece of earth by growing a homestead, a years-long endeavor. Cleveland hews closer to that idea, I think. Yes, you can make pickles here. Kombucha. Beer. But you can also make a life — or better, grow one.

I came home broken and frustrated, expecting to molder away on the couch. But I made friends. Welcome home, people would say. Don’t be a stranger. And I couldn’t if I tried — I’d see the same faces again and again. I thought I’d be here temporarily, just pass through, keep my San Francisco address and never really, fully, settle. But Cleveland is a small city, even on crutches. Sitting in dusky bars to read, strangers introduced themselves; bartenders remembered my name. Hoping for a quiet anonymous coffee, a city councilmen rode by on his bike, recognized me, and stopped, told me to pack up and move in. A seminar, not a lecture class — don’t doze off, you’re forced to participate. The city grabbed me, pulled me in, its vines entwined my ankles. San Francisco shouted leave. Cleveland shouted stay. You can’t disappear here. Well, I thought. Why would I want to?

And so I’m here. Roads end in the west, here they pass through. It’s flyover country, sure. Stick around though, and let it seep into you. Cleveland grows into you. And you grow into it.

___
William Bostwick is a writer and brewer in Cleveland. His book The Brewer’s Tale: A History of the World According to Beer, is out now in paperback. You can find him on Twitter @brewerstale


Banner photo by b k (https://www.flickr.com/photos/joiseyshowaa)