For Some Clevelanders, It’s All About the Side Hustle

Search for downtown Cleveland on Google Earth before Friday and a giant, pixelated blob of commemorative Trump-themed swag will appear before your very eyes. Pins, hats, programs, t-shirts, posters, flags, whoopee cushions, masks, bobbleheads, and more can all be yours for the low, low price of… negotiable.

This city’s hustle is strong.

In the build-up to the RNC, areas anticipating major foot traffic were divided into three “zones”; mere mortals hoping to participate in the almost-free market free-for-all then purchased these permits whose upwardly scaling prices would correspond, theoretically, to the amount of foot traffic they could expect, and thus the volume of their sales.

Regardless of zone, the wares themselves blend together fast if one isn’t in a purchasing mood. Given such brutal competition, I stopped to inquire about business with two kiosks that stood apart from the crowd: a woman selling dashikis alongside the ubiquitous Trump tees and Cavs pennants, and farther afield, a man who’d brought along his two bored-beyond-belief-looking young sons.

Both these aspiring cotton kingpins, it turns out, are social workers.

LaVonne Williams, the proprietor of dashikis, comes downtown from Cleveland Heights each morning. She explains her summer staycation bluntly: “They don’t pay social workers, so we gotta make money some kind of way. I love what I do, but I drive for Uber on the side, too.”

The striking range of her wares is, she says, practical above all. 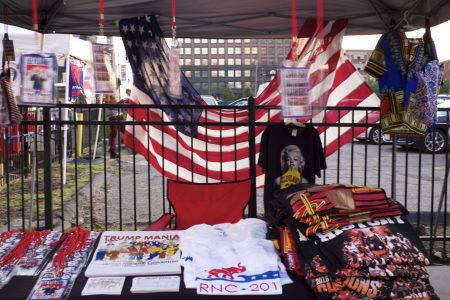 “It’s just all here for capital gain,” she says. “We have things left over from Obama’s inauguration. We have Black Lives Matter bands. We have items left over from the championships, We have dashikis, and we have RNC paraphernalia. It represents society. We’re not all one or the other. We’re a mixture. We’re diverse and we can all coexist, and I think this is a representation of that.”

With her prime location on Superior near West 3rd Street, LaVonne’s sales have continued to increase since she set up shop Monday morning – a trend she hopes will continue in the coming days. 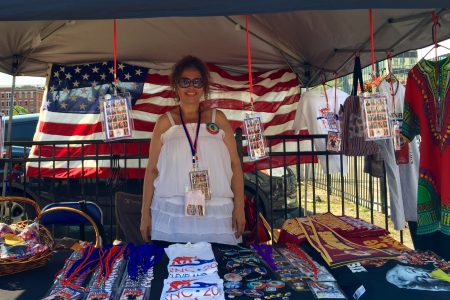 Unlike LaVonne, Desmond, who declined to give his last name, feels like he lost a very unfair lottery; his sales at Prospect and East 8th Street haven’t been what he’d expected.

“These rich people,” he says. “They keep their money.”

The Lynnhurst resident, who the rest of the year holds two separate positions as a social worker, saw selling convention swag as a worthy experiment in moneymaking.

“Instead of going to work all the time, I’m trying to find ways to invest my money and have my money work for me,” he says. “This was my first entrepreneurial experience. I have my boys with me. They’re learning a lot, too.”

The younger of his sons spent the duration of our chat munching on Trader Joe’s snacks or giggling at a drunk veteran who repeatedly dropped the f-bomb while threatening to burn the same three-dollar American flag Desmond had just sold him. The elder mostly kept his head on the table, pleading a headache.

Even if business hasn’t been as booming as he’d like, Desmond has a positive take on his pop-up. 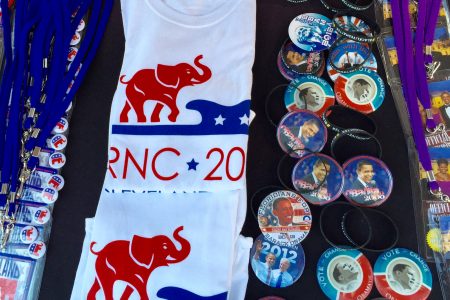 “Everyone’s been kind to me, from the police to the people,” he says. “Police officers gave us some stickers and some badges….My boys need to see that. But a Black person in general, a lot of times when we encounter the police in general, it’s alway something negative. Interaction is so limited. It’s not social, in a sense when we’re in a whole different environment where we can hang out, or we can see one another.

‘The only time we come together is when there’s conflict,” he continues. “So here they see me as a father, or… whatever preconceived notion they may have. “

Regardless of how their balance sheets work out by the weekend, neither Desmond nor LaVonne intend to vote for Trump come Election Day. They’re just in this for the stacks, until they go back to their lives in service of others.

watch a video of LaVonne Williams discussing her wares as well as Cleveland’s revitalization and endemic poverty.