Counting the Hours, Waiting to Exhale

A banner on the front door reads, “Exhale Love!”

Exhale. But not yet.

It feels as though the entire city is waiting, holding its breath. After weeks of anxiety and preparation in a region absorbing the unfamiliar notion of being a champion and a country shattered and edgy with violence and racial tension, the Republican National Convention arrived as a sort of civic Rorschach test.

Those of us who live in Northeast Ohio welcomed it cautiously, with profoundly mixed emotions, unsure exactly how to feel, and everyone I talk to all over downtown on this final day is expressing some version of the same theme: This has gone better than expected. Please let us get through these last remaining hours. We deserve this, more than the rest of the country knows. 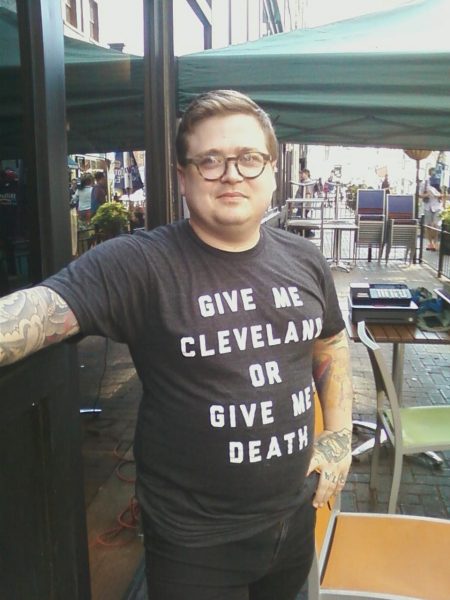 Something has changed here. It’s subtle. But in this Rust Belt-Times Square diorama, with the outdoor cable news sets and the moving throngs of visitors, the street vendors and sidewalk musicians, the street brick wet from its morning hose-down, the clatter of metal chairs being arranged on the House of Blues patio, there’s the sense of a deeper patina, as though all this action and attention has insinuated itself into the stone and steel and East 4th will be a little more hip, a little more wise, a little more real.

I overhear two women from Cleveland talking to a man who’s visiting from out of state, and their conversation is an unabashed lovefest for the city, from both the native and the tourist’s perspective.

I can’t help noticing that the sun is shining brightly, as it has been since this whole rigmarole began Monday morning, and that it’s summer-hot, but not terribly humid, thus undermining the old Ohio “not-so-much-the-heat-as the-humidity” cliché, and I almost want to lean in and tell the guy, “You know, the weather’s like this here all year round. You really should consider buying one of our outrageously affordable houses,” but these ladies are doing just fine on their own, so I continue.

Down the block, leaning against a storefront, is Chris Petri, who works at Erie Island Coffee Co. His black T-shirt bears the slogan, “GIVE ME CLEVELAND OR GIVE ME DEATH.” Petri has had a front-row seat all week to the East 4th hustle, and he’s ready for a nice quiet rest of the summer. But first there are these remaining hours.

“I just want everything to go smoothly,” he says, clasping his hands together in hope.
It’s like the Browns are in the fourth quarter, leading by a field goal. Something could still go wrong. We’ll never lose that part of our thinking. But now we can count the hours until the final gun – wait, please … no guns. Let’s just drop this metaphor and move on.

I’m on the phone with Dan Moulthrop, chief executive officer of the Cleveland City Club, a friend with whom I’ve always enjoyed discussing the local identity, because he really gets it, and he cares, and also because he endures my overuse of sports metaphors. (Before the conversation even begins I’ve already dropped the above Browns reference and made an analogy to Lucy pulling the football away from Charlie Brown.)

Moulthrop and I talked last week, before all this began, and shared the same mixed feelings of hoping for the best while fearing the worst, with a shared recognition that either of those extremes could have profound consequences.

“I feel really good, and pretty optimistic,” Moulthrop says. “We’ve only got, like, 12 hours to go. Given our history of snatching defeat from the jaws of victory, we actually seem to be operating really well.” 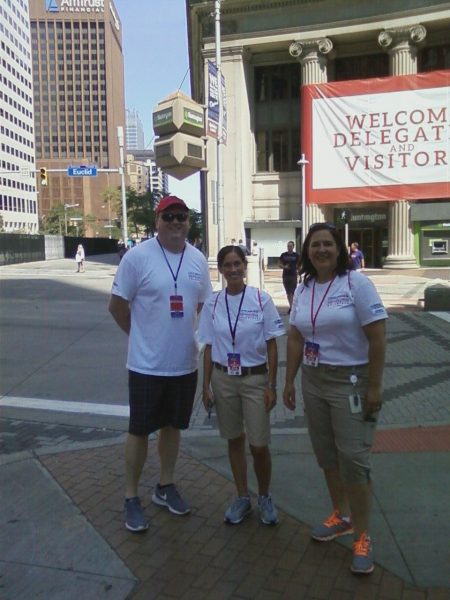 The city has physically changed in the past year, and many of those changes were directly connected to the energized, Cleveland-esque all-hands-on deck approach to trying to look our best, hand-to-hand combat against the ugly old narrative of a dingy, forlorn city with its river in flames. The new Hilton hotel, the revamped Public Square, the murals along the RTA line – those of us who live here are ourselves seeing a different city this week, as are the national observers. But we have our own understanding of this difference.

The convention is a single piece of one of the most unusual summers in the region’s history. Our identity is actively evolving. A million of us celebrated the Cavaliers historic championship at the June parade. Countless others have been exploring this week as local tourists. Assuming these next few hours go well, we will have a new piece of the narrative when Friday dawns.

“I think people downtown are having a collective experience of seeing the city animated in a way it hasn’t been since, like, the Fifties,” Moulthroup says. “That kind of validation is so meaningful to a place like Cleveland.”

We end the call as he heads off to a meeting. As we disconnect, a guy walks past me wearing a “Factory of Sadness” T-shirt.

The front gates, which I don’t think I’ve ever seen closed, are chained and padlocked. Beyond the fence, I can see stacks of metal barricades, extras, I assume, waiting for the unknown.

Amid the cautious optimism have been the questions of what this will end up costing us, what the bottom line will be. It’s impossible to know at this point, and there is the further question of how that cost should be calculated. Is this an investment in our self-esteem? Will the city’s real problems, of race and police relations, of housing and joblessness, float on a rising tide?

I hear a siren in the near distance and realize that the flinching instinct I felt at this sound earlier in the week has eased. I still look around for smoke in the sky or signs of panic, but not like I did on Monday. I’d put a bandana in my bag at the beginning of the week, thinking it might be useful in the event of tear gas, and it remains there, folded.

I end my journey through convention week where I began, at the top of the steps to the Cuyahoga County Soldiers’ and Sailors’ Monument, talking to the executive director, Tim Daley, who has sat here in a chair all week, sunscreened and protected by a wide-brimmed hat, counting visitors with a clicker, well over 7,500 since Sunday, and still more coming. 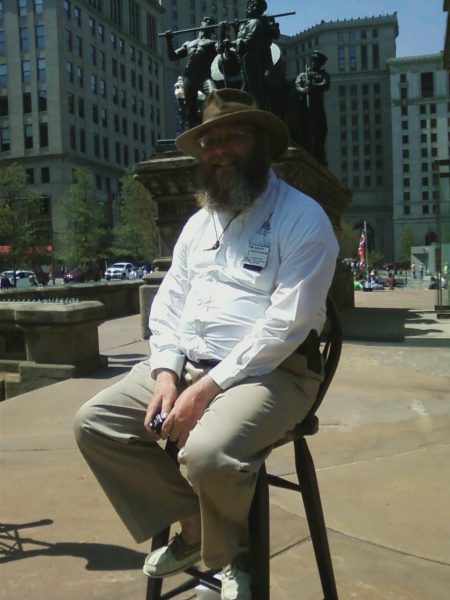 He had the same apprehensions, the same uncertainties, the same hope as everyone else, and now he expresses the same if-we-can-just-make-it-to-midnight preliminary relief.

“As a Clevelander, I’m just so proud of what the city has done,” he says. “I’ve heard nothing but praise from so many people. A congressman from another state came through and he told me, ‘When I visit a new city, I have a rule – would I bring my wife here?’ And the answer was, yes.”

A new group arrives and Daley greets them, counting them off with his clicker. I depart and as I prepare to leave Public Square for the final time, I come upon a woman holding out a handmade cardboard sign and shouting out its slogan, announcing a return to the real Cleveland: