Dan Gilbert’s Land Bridge is a Blight on the Cityscape

Editor’s Note: We’re pleased to announce and debut an intermittent collaboration with Cleveland Frowns, published by Peter Pattakos, a Cleveland attorney who’s sure that the Browns, Cavs and Indians should be publicly owned and believes that The Curse of Chief Wahoo is the best evidence there is of a benevolent metaphysical order. First up, Pattakos comments on Dan Gilbert’s land bridge. This piece was originally published December 4, 2013.

Here’s a photo of the view north up Ontario Street from Superior Avenue, just off Public Square in the heart of downtown Cleveland. 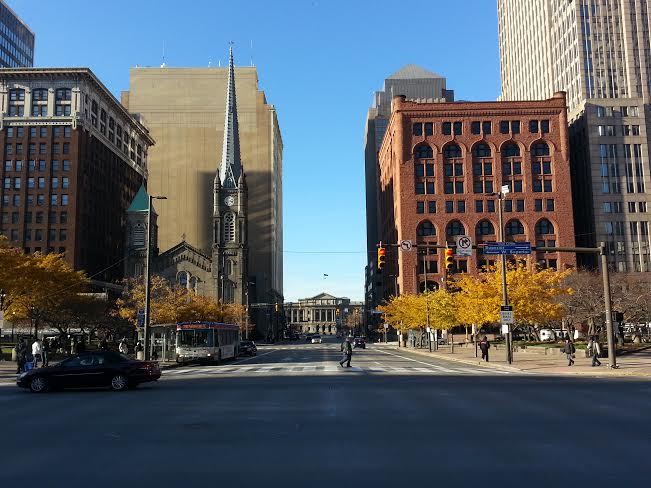 Pictured is the beautiful Cuyahoga County Courthouse, framed as a crown jewel of the North Coast between two more century-old landmarks, the Old Stone Church (which is actually almost two centuries old), and the Society for Savings Building (which stood as the tallest building in Cleveland for seven years until 1896). This view used to extend from three blocks south of where the above photo was taken, all the way from the cliff bordering downtown and the river where Ontario meets Huron Road and veers north into the center of the city.

But that was before city leaders, led by Mayor Frank Jackson and Councilman Joe Cimperman, rubber-stamped Dan Gilbert’s proposal to build a five-million dollar “skywalk” connecting Gilbert’s Horseshoe Casino with a parking lot for casino customers. This approval came over vigorous public objection and unrebutted evidence, including testimony from officials in comparable American cities like Minneapolis and Cincinnati, showing the negative impact that such land bridges have on city streets.

And now the view up Ontario from Huron looks like this: 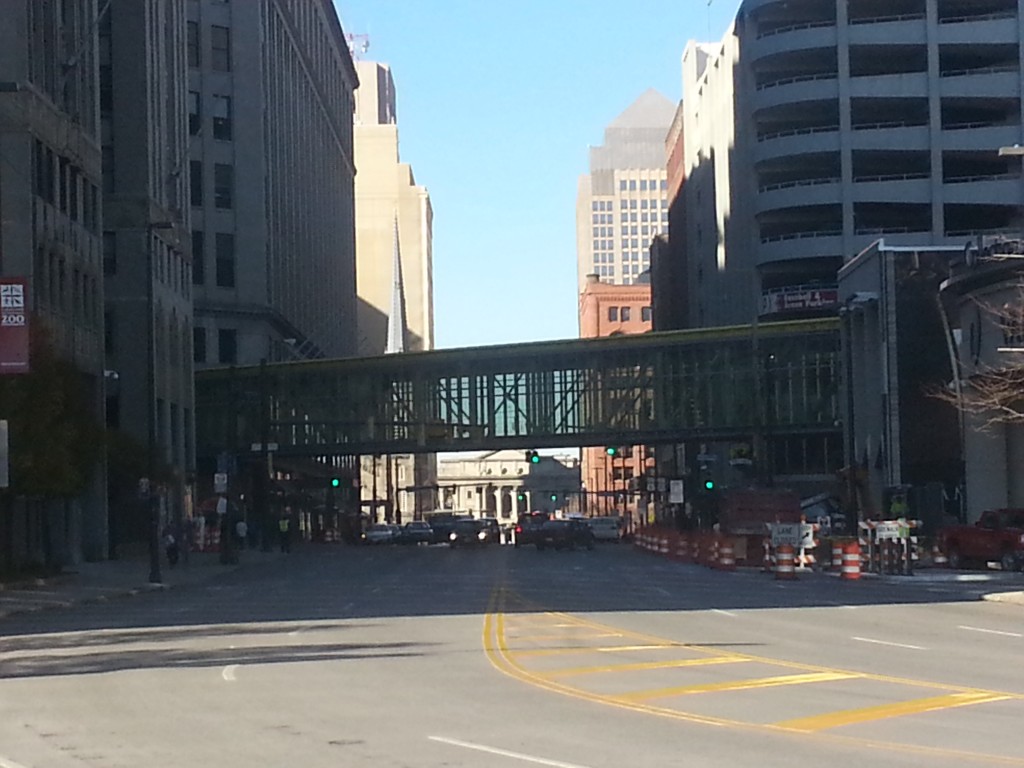 Which must have at least something to do with what Plain Dealer architectural critic Steven Litt was talking about when he said back in 2011 that: “The negative impacts of the changes proposed by [Gilbert’s casino company] Rock Gaming are hard to quantify [including the construction of the skywalk and the related demolition of the landmark Columbia Building to make room for the parking garage], but they’re the kind of actions that can erode a city’s visual integrity and sense of place, even its identity.”

Though Mr. Litt surely must appreciate the symbolism of Gilbert’s giant black slash through Cleveland’s grandest monument to democracy and justice.

[blocktext align=”right”]The Rust Belt’s steady transformation into Biff’s 1985 continues apace.[/blocktext]All so that a few people — the ones who can’t find anything more interesting to wager on than spinning numbers that are stacked in favor of a gilded slumlord — don’t have to walk across the street outside to get from a parking garage to a casino.

“The gaming customer is not comfortable parking outside a certain radius without climate control and security,” Gilbert’s Rock Gaming partner Nate Forbes explained when the proposal for the skywalk was first announced in 2011. “We need proprietary control.”

“It’ll cut back on us getting wet when it’s raining or it’s snowing,” said casino patron Tiffany Few of Cuyahoga Falls to Cleveland’s Newsnet5. “We don’t have to fight the traffic and it will be great.”

Great. And that’s it. The land bridge connects the casino with absolutely nothing else but a casino parking garage ($15 per hour minimum, unless you’re a casino “Total Rewards” member (Note: “Restraint has been left off the menu.”)); 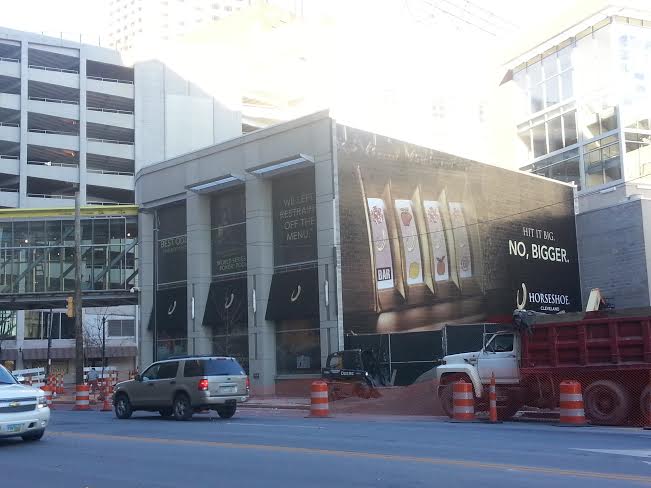 And a gift shop that sells the “swag that every gambler needs.” 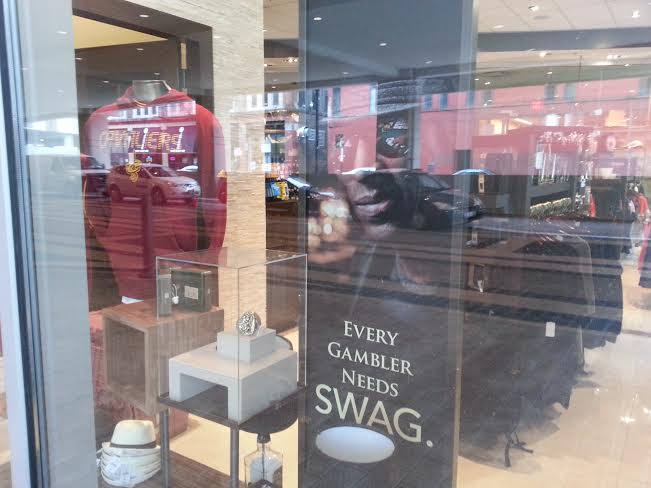 The bridge from nowhere isn’t open for “public” use just yet, but here’s what the street outside of “the soul of Cleveland, a 24-hour city” looked like at 12:45 PM on Tuesday three weeks ago: 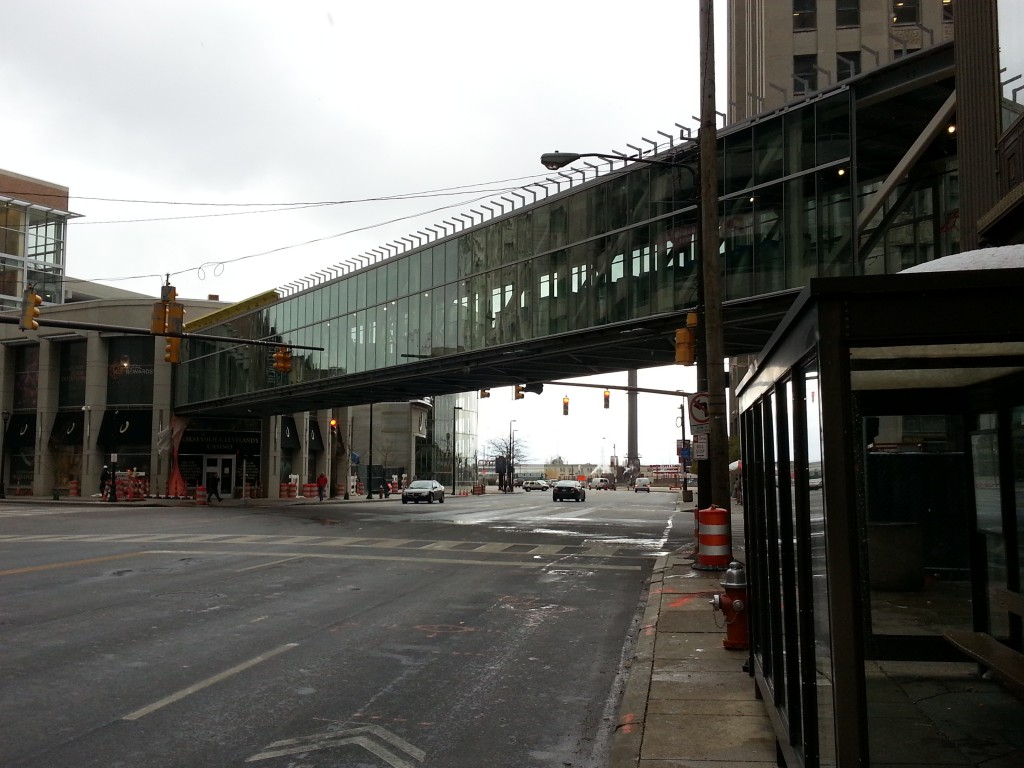 In related news, Gilbert was recently appointed chairman of a $300 million federally funded “blight task force” in Detroit by which he plans to bulldoze pretty much whatever the hell.

Peter Pattakos is a Cleveland attorney and publisher of the website clevelandfrowns.com.