At the end of the film The End of the Tour, journalist David Lipsky (played by Jesse Eisenberg) and novelist David Foster Wallace (played by Jason Segel) return to where they first met, in Wallace’s bland house in Bloomington, Illinois. Lipsky still isn’t sure he has enough about his subject to hang a profile on. He hasn’t quite made sense this brilliant writer who’s produced a compassionate yet intellectually dense novel, Infinite Jest, but who has an Alanis Morissette poster hanging on a wall and only grudgingly discusses his history of addiction. So when Wallace excuses himself for a moment, Lipsky does what any responsible journalist would: he snoops.

“Padded toilet seat,” he intones into his microphone in Wallace’s bathroom. “Postcards: baboons crawling. The Clintons. St. Ignatius Prayer that sounds very like the AA prayer.” Later, Wallace will tell Lipsky that he’s going to a dance that evening at a local Baptist church. The first question out of Lipsky’s mouth isn’t You go to church? The postcard has settled that. He asks instead: “You dance?” 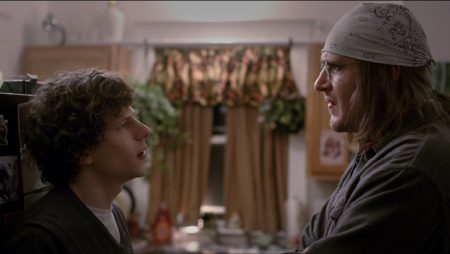 Jesse Eisenberg and Jason Segel in The End of the Tour [source imdb.com]

“It’s put on by this, I forget what it’s called, Some Number Baptist Church of Bloomington,” Wallace says. “But they — it’s nice. Everybody’s just, everyone more or less wants to leave each other alone.”

That statement, which closes the movie’s source text, Lipsky’s 2010 book Although of Course You End Up Becoming Yourself, is touching in its ambiguity. What kind of relationship did Wallace have with religion, keeping a prayer someplace he’d see it every day but going to a church dance to be left alone? The read on Wallace’s faith, who committed suicide in 2008, is that it was exclusively a function of his sobriety. In response to question on the subject, Wallace biographer D.T. Max said, “my assumption is that this practice [of churchgoing] began after he stopped drinking and smoking pot as part of getting clean and may have continued either because he felt it centered him or merely out of habit, as part of his sense of himself as a middle-class Midwesterner.”

That “Midwesterner” bit is a touch condescending. Max assumes an urge to belong to a class, while Wallace himself said he wanted just the opposite; church was a place where he could be left alone. (And aren’t there plenty of people on the coasts whose sense of themselves center on a church?) But religious feeling was a critical part of his work in ways that go beyond the AA narrative in Infinite Jest. In String Theory, a new collection assembling Wallace’s tennis writing published by the Library of America, Wallace is often considering the theme of balancing the physical and the spiritual, scrutinizing the way athletic prowess suggests a kind of transcendence. His 2006 profile of Roger Federer was titled “Federer as Religious Experience,” and though it’s not much for biblical language per se (excepting a tribute to the “sacred grass of Wimbledon”), his closing invocation about “power and aggression made vulnerable to beauty” feels biblical. He liked this territory: In a 1991 essay for Harper’s also included in String Theory, he recalls his early success as a high-school tennis player as a function of his intuitive understanding of wind patterns in his native downstate Illinois. Over time, he writes, he’d acquired a “Taoistic ability to control via noncontrol. I’d established a private religion of wind.” He developed this faith in response to his healthy appreciation to the “true religious-type wind” that whipsaws the locals and utterly baffles visitors. 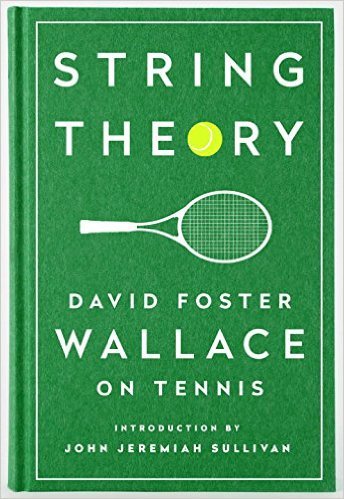 It’s interesting stuff if you’re a Wallace fan, but fiction was always his main event. And his concern with faith and Midwesterness and down-to-earth-ness and the urge to be alone found its fullest flower not in an essay or short story but in one single chapter. Chapter 22 of The Pale King, Wallace’s unfinished novel published in 2011, is a 100-page monologue delivered by Chris Fogle, an employee in a central Illinois IRS office, who’s recalling how he converted from a “wastoid” squandering his college education via drugs and general slackerdom to an intellectually rock-ribbed accountant after accidentally sitting in on a tax accounting class taught by a Jesuit priest at DePaul University. In its overall structure, the novella is a road-to-Damascus story; writer and Wallace expert Matt Bucher has written thoughtfully about how the “Fogle novella” echoes Puritan conversion narratives. And the religious rhetoric in the story is plain to see, from the false idols of drugs to the references to putting away childish things to a skeptical encounter with an evangelical convert to a final state of grace after being “called to account.” It’s a pun, sure, but it’s clear Wallace isn’t landing a joke so much as pinpointing a connection.

Fogle, like Wallace, was a diffident convert. His conversion isn’t so much a leap into a different kind of consciousness as an awareness of there being two kinds of consciousness — and one of those consciousnesses was, if not spiritual, so ineffable as to make little difference. During his “wastoid” period, Fogle tells us, he was obsessed with a self-awareness he acquired while he was taking an amphetamine called Obetrol. He dubs this self-awareness “doubling”: “to not only be in a room but be totally aware that I was in the room, seated in a certain easy chair in a certain position listening to a certain specific track of an album whose cover was a certain specific combination of colors and designs.” Doubling offers an escape from the nihilism that plagues him. The sense of second selves, not the drug itself, suggests a pathway to the rigor that makes him a committed IRS accountant. 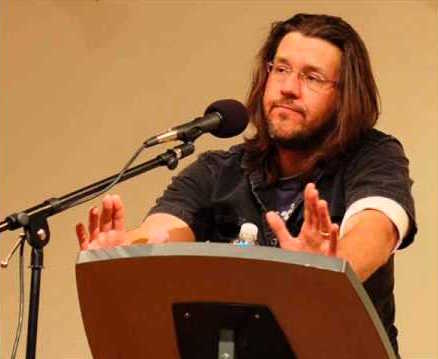 Religion in itself wasn’t going to do the trick for Fogle: “I wasn’t raised as anything,” he explains. And full-throated evangelism was much of a dead end for him as the nihilism he cultivated in his callow years; indeed, he perceived it as equally problematically extreme and for a while equated it with all faith. “I could pretend that the evangelicals’ smugness and self-righteousness were the only real antithesis or alternative to the cynical, nihilistically wastoid attitude I was starting to cultivate in myself.”

Similarly, Wallace’s version of the sacred always demanded a bit of the secular: faith but in the context of the IRS, religious awe but on a tennis court, church but just dancing at Some Number Baptist Church. Later in his life, Wallace would tell his AA sponsor that he couldn’t go to church because “I always get the giggles,” as Max reports in his Wallace biography, Every Love Story Is a Ghost Story. But Wallace was alert to religion’s power as an ordering force. A couple of years after Infinite Jest came out, he scribbled a personal to-do list of “What Balance Would Look Like.” It includes the usual nudges toward self-improvement like exercise, work, and sleep. But it closes with “5 [recovery meetings a] week” and, lastly, “Church.”

Wallace never considered fiction solely an intellectual and philosophical activity — he strove for the poignant emotional effect as well. Whether he succeeded at it is up for debate. In his debut novel, The Broom of the System, no. In his essays and chapter 22 of The Pale King, yes. Part of the power of the novella, in fact, is in how much you can feel Fogle resist that emotional tug, to avoid telling the most significant and tragic part of the story about the death of his father. Fogle denies that his pursuit of an accounting career was “connected to my ‘loss’ of a father who was himself an accountant.” And yet, for all his denials, the story is unquestionably a story about being reconciled with the father. And not so dispassionately so that Wallace was just borrowing a religious trope for cheap affect.