Airheads in Public Square: Does Cleveland Have The Money for The RNC?

The scene in Public Square was downright idyllic in the hours before the RNC began. As Belt editor Martha Bayne and I lounged on a picnic table in the shade Sunday afternoon, I watched happy kids playing in the new fountains. A couple of hipster Clevelanders let two of the kids, both wearing their swimsuits, play Ping-Pong with them, and patiently walked around the square picking up errant balls the younger players sent flying. More kids wandered by selling candy—one had a box of AirHeads and a charming hard sell for why we should buy two for a dollar instead of one for fifty cents (“If you pick the Mystery Flavor and get a Cherry and eat them at the same time it tastes like lemonade.”)

But it didn’t take long for this moment seemingly ripped from a Destination Cleveland video to show cracks. A manager from REBol, the new restaurant inside Public Square, told the kids hawking candy they needed to leave the customers alone. REBol sports Socialist Realism iconography, and, upon asking, the server told me the neologism is pronounced “rebel,” thus the “revolution look,” and “the ‘o’ refers the bowls we have on the menu; we serve street food just like it is served around the world.” Neither the prices — too steep for the low five figure medium income of this city — nor the offerings — matcha, bone broth, and water in a box for four dollars — are representatively Cleveland. 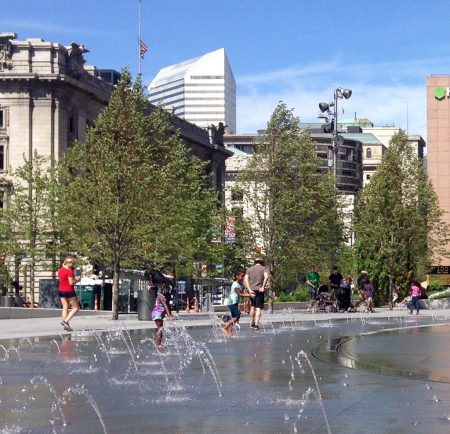 Despite the trying-too-hard restaurant and the shooing away of adorable side-hustling kids, I found myself, as I sipped my kale smoothie and watched the leisurely cops, Trump protesters, delegates, and locals mill about, imagining that I might suddenly be living in a more cosmopolitan, Jane-Jacobs-friendly city: that next week, when the barriers and the CNN Grill are trucked away, Cleveland might really be a better place to live because of this event.

But then I wondered: what about the six million?

Six million is the amount Cleveland organizers of the RNC are short what they need to host this shebang. The locals who lobbied the RNC to come here were tasked with raising $64 million for the four-day event, but by Thursday they had only brought in $58.25 million. So David Gilbert, the head of the non-profit host committee, wrote a letter to Sheldon Adelson asking for a six million dollar check to cover the balance. (Then he wrote a correction to that letter, because he got some things wrong the first time.)

What neither the letter nor the coverage of it explain is what happens if no one makes up the difference. Would the city foot the bill? Would local businesses pick up more of the tab? Or would the vendors and contractors hired to shine up the place not be paid?

I hope it is not the contractors, because I saw many of them downtown over the weekend, setting up tents and hanging “Prohibited Items” signs on barriers. All the workers I talked to  live in Florida, which surprised me. After all, wasn’t providing jobs for Clevelanders one of the perks of the city getting the RNC? Isn’t providing jobs for “our own” — and not hiring labor from the south — one of the driving issues of Trump’s GOP?  To compound things, one of the companies shipping in workers from Florida to Cleveland is named Sunbelt Rentals. So Cleveland, the poster child for the Rust Belt, hired the Sun Belt to prepare for the RNC. 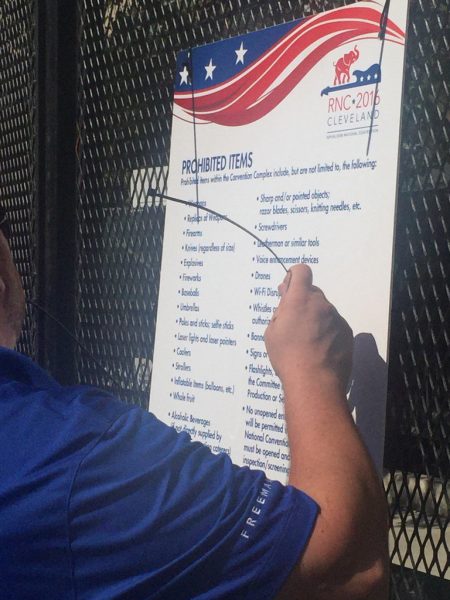 I found these imported, itinerant laborers from the south quite friendly.  One, who was speaking Spanish to a coworker while setting up tents between Quicken Loans Arena and Progressive Field, raised his thumb when I asked him if he supported Trump. Then another Sunbelt worker, an African-American man in his 30s, who was eating a Subway sandwich on the sidewalk nearby, saw his gesture and told me, “Oh, do not believe him; he does not support Trump.” When I asked the man on lunch break — also a Florida resident — who he was voting for, he shrugged. “It doesn’t matter. My vote doesn’t count.”

The public space in Cleveland is gorgeous right now, but the public does not feel enfranchised and the space is in debt. Clearly, raising money by selling AirHeads is not going to do the trick. Plus, like bringing whole fruit into the Event Zone, it is prohibited. There is still much work to be done.

Anne Trubek is the founder and publisher of Belt Publishing.