Fear and Loathing on Euclid Avenue: Dispatches from the RNC in CLE

“I’m here to see my hero, Milo Yiannopoulos. I’m a 58-year-old straight guy in love with a dangerous faggot. Milo speaks the truth.”

That’s Paul, and he was waiting for both the aforementioned faggot and fellow right-wing writer/pit viper Ann Coulter to arrive for a noon talk and booksigning at the Case Western Reserve University Barnes & Noble on Euclid. The line was growing – 70, 100, 120 people strong. Coulter was late. So while the fans waited they talked.

“I’m not here because I agree with everybody,” said Evan, who, like Paul, declined to give his last name and was carrying a navy-blue volume of Navy history, which he was asking people in the line to sign. “But I was bored and I figured I would go down and get some signatures for my book.”

Evan voted for Jill Stein in the last election. This year he doesn’t know.

“I hope a giant meteor comes down and destroys it all beforehand,” he said. 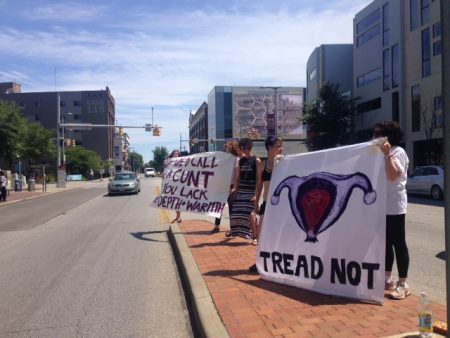 Protestors on Euclid Avenue, across from Barnes & Noble.

Across the street, on the median, five women held up sheets. One depicted a pink and purple uterus, with the words: “Tread Not.” The other was starker: “Ann: We’d call you a cunt but you lack the depth and warmth.”

“That’s so offensive! There are children here!” hollered one man across the street, who was, indeed, with his 12-year-old son. The son said he was a Coulter fan.

“I can see why they’re there, but they’re very unattractive,” said another man, of the women across the street.

“Take a bath!” screamed his friend. “Get a job you losers!”

“I’ll pray for you at Judgment Day!” hollered Paul.

“I had an abortion on Good Friday!” yelled back the young woman leading the protest.

If she could speak to Ann Coulter, she said, she’d just say, “Get the hell out of my city.” And if she felt like crossing the street to talk to Paul, which she didn’t, she’d say, simply, “I’m praying for you.”

“I raised my children Catholic,” said her mom, who was holding up one end of the uterus. “And I’m here today because no one has the right to tell my daughters, or you, or anyone else, what to do with their bodies.” 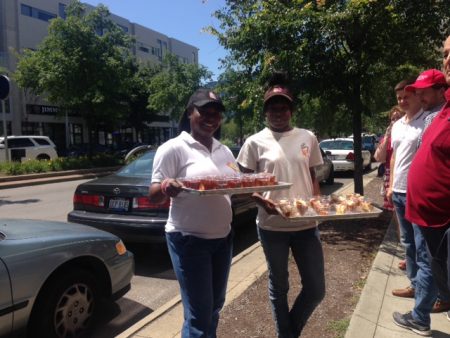 Back across the street, two young women passed out iced tea and samples from a nearby Dunkin Donuts. Business was good today, they said, as they headed back to the store for more.

Yiannopoulos arrived, to many cheers, but by the time he emerged from the store to speak the protestors on the median had departed.

“I think he attacks everything that is wrong with the media in this country,” said a young man who identified himself as a Case Western student. “And he just got shut down on Twitter for no reason.”

When it was pointed out that there was, indeed, a reason – namely the brutal online harassment of Ghostbusters actor Leslie Jones – he shrugged. “I don’t know who that is.”

Tanned and sleek, Yiannopolous spoke from a microphone on the sidewalk for maybe five minutes. He was sorry, he said. Coulter was on her way, but he had to go be on TV. The liberal media were fools. Getting kicked off of Twitter was the best thing that could have happened to him. He was gleeful; looking forward to “making their lives hell.”

And then he was gone – along with half the media on site.

Coulter turned up a few minutes later and took the mic for a few blessedly short minutes—and then she scurried back inside, where she signed books for a few fans at a time, as long as they could produce a proof of purchase receipt. 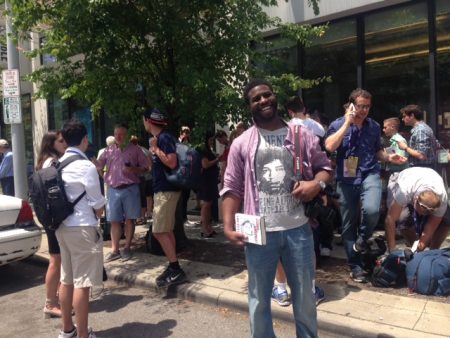 “Well that was a waste of time,” said Chieme Ndekwe, 24. He’d come to Cleveland from Las Vegas to support Donald Trump, and said that Dinesh D’Souza’s Hillary’s America: The Secret History of the Democratic Party, which had screened on Monday, was “great, and really well researched.” He sighed, and posed for a picture with his unsigned book.

As the crowd drifted away a man in a Trump hat with a Dutch accent spoke with reporters. He was Thierry Baudet, a right-wing Amsterdam journalist who’d been heavily involved in organizing for April’s Dutch referendum against EU expansion. He was on holiday, and stopping in Cleveland en route to Nashville and points south.

“I’m right wing, and against centralized European rule,” he said, “which puts me in a natural alliance with the Republicans.

“What strikes me about the American debate right now,” he continued, “is that it is so energetic. It’s so fun. We can learn from it in Europe.”

Editor’s note: Details identifying the protestors have been removed.

Martha Bayne is editor-in-chief of Belt.