From Chopin to Craft Beer : A Buffalo Skeptic Sees the Light

Stately, plump houses and maple trees line Porter Avenue en route from Buffalo’s Peace Bridge to Symphony Circle. The homes are old, but they are lived in and cared for.

As the circle comes into view, the sides of the road become greenspaces, covered with little-leaf linden trees, horse chestnuts, crab apples and ginkgoes. You pass a bust of Chopin on a granite pedestal then the sleek Kleinhans Music Hall, designed by Finnish architect Eliel Saarinen and his son, Eero. The dark stone and tall tower of the First Presbyterian Church, which opened in 1891, loom nearby, and those buildings sit astride the large roundabout with a landscaped garden that is built around a five-pronged, ornate lamp. The circle is the work of Frederick Law Olmstead and Calvert Vaux, the creators of Central Park, who designed an extensive park and parkway system for Buffalo in the 19th century. 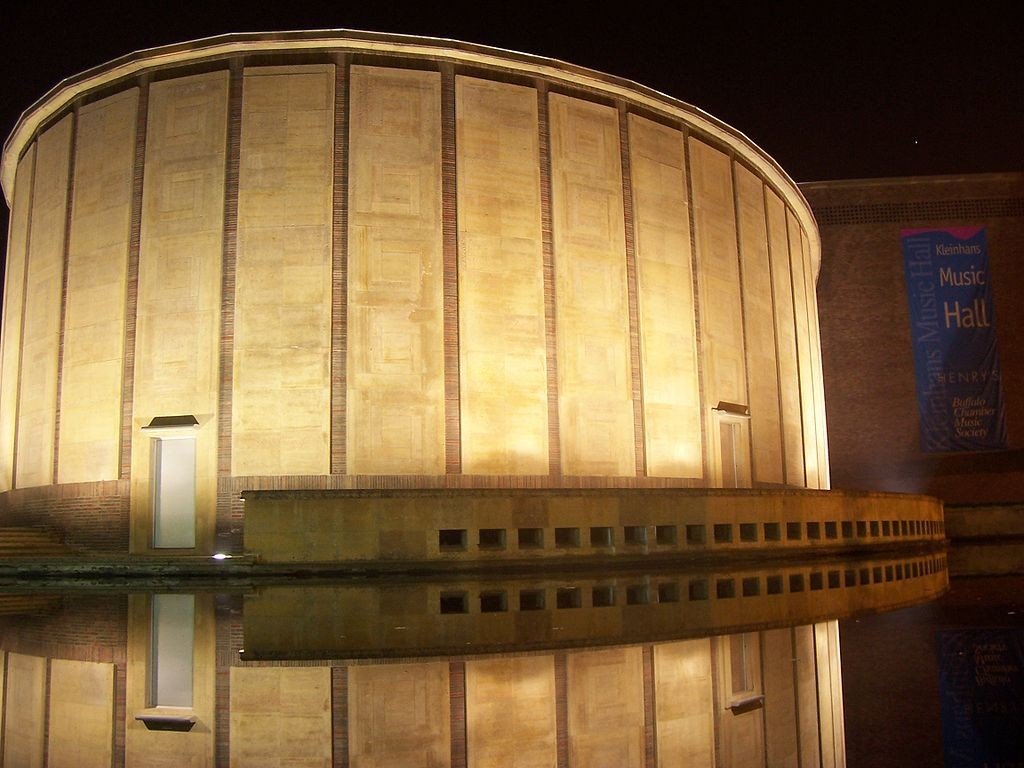 Chopin? Saarinen? Olmstead? Ornate lamps? I wasn’t expecting such an elegant entrée to Buffalo. It left me puzzled as I arrived for my first extended visit last fall.

Arriving in a fabled city for the first time can be an emotional experience. I’ll never forget driving under a sign in the northern Bronx that advised travelers they were “Entering New York City,” or looking out the windows of trains as they pulled into the hive-like Gare du Nord in Paris or London’s Victoria Station. Suddenly you find yourself in a place you had imagined for years, and it can be awe inspiring.

I didn’t feel that way in Buffalo. It had never fired my imagination, and I expected to be underwhelmed, even though a friend there had assured me the city was changing. “Buffalo is experiencing a rebirth, so it’s exciting to be here,” she said.

[blocktext align=”left”]I was dubious about Buffalo’s comeback because I had long believed Buffalo was in worse shape than Detroit.[/blocktext]I was skeptical, even though I knew many beat-up industrial cities are enjoying a renaissance of sorts these days, as college-educated millennials, bored with the suburbs, return to the urban neighborhoods their parents and grandparents fled, and money is flowing in to build their housing, coffee shops, and craft-beer outlets.

Even Detroit, my hometown, is “coming back,” people say, though boosters have been proclaiming Detroit’s resurrection for about as long as Detroit has been in decline. As far back as the mid-1970s Detroit named its then-new riverfront towers the Renaissance Center to underscore the point about the city’s hoped-for rebirth. A lot has happened to Detroit in the past 40 years, including bankruptcy. But only small parts of it are being reborn.

I was dubious about Buffalo’s comeback because I had long believed Buffalo was in worse shape than Detroit. Prodded by the popular image of the city as a frozen wasteland, with almost no first-hand experience — I had only passed through downtown Buffalo briefly a few times — I still found a way to look down on Buffalo, as well as Cleveland, Toledo, and Pittsburgh. Slighting our neighbors could be a default position for Detroiters. It was probably psychologically comforting to believe that cities so close and so similar in background could be even more damaged than ours. We assumed Detroit was cooler, more interesting, and more major-league. 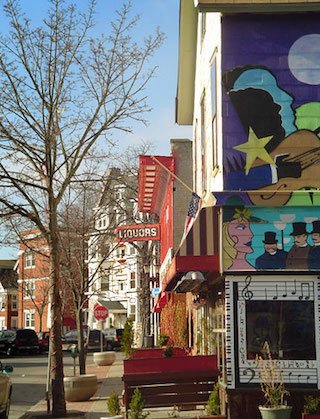 I bounced around Buffalo in all directions and was surprised at almost every turn. I stayed in Allentown, an old and diverse neighborhood on the northern edge of downtown that is filled with 19th-century homes, bars, restaurants, shops, pedestrians, and a man who blows bubbles from a third floor-window onto Allen and Elmwood, an intersection that reminded me of the north side of Chicago. Within walking distance of Allentown is Chippewa Street, with revived nightlife and a restaurant, Bacchus, where I ate one of the best seafood dinners in memory — halibut, simply prepared.

Heading north, Elmwood Avenue becomes a lively shopping and nightlife district. SPoT Coffee was cozy and delicious. Talking Leaves Books’ idiosyncratic inventory — and the Caffe Aroma wine bar and coffee shop next door — made me think I was in Toronto.

Outside Talking Leaves is Bidwell Parkway, a broad, tree-lined boulevard that connects two other graceful traffic circles and is crowded with sprawling old homes with natural woodwork, fireplaces, and leaded glass.

There was more shopping on Grant Street, a funkier and up-and-coming district in a neighborhood of immigrants and refugees. Among the attractions are bookstores, food, coffee, raw juice, African imports, Freddy J’s Barbeque and the West Side Bazaar, a collection of vendors selling wares around a small-scale food court that specializes in African and southeast Asian cuisine.

Downtown, I saw skaters on the milk-white ice of a large, artificial rink that was fashioned from an old canal, part of an extensive effort to reclaim Buffalo’s waterfront. Next-door is the HarborCenter, a new, 19-story building that is devoted to amateur hockey. Unique in North America, it’s a nearly $200-million development that includes two rinks — on the building’s sixth floor — a hockey academy, training center, parking garage, sports bar and Tim Hortons. A 12-story Marriott hotel is under construction. 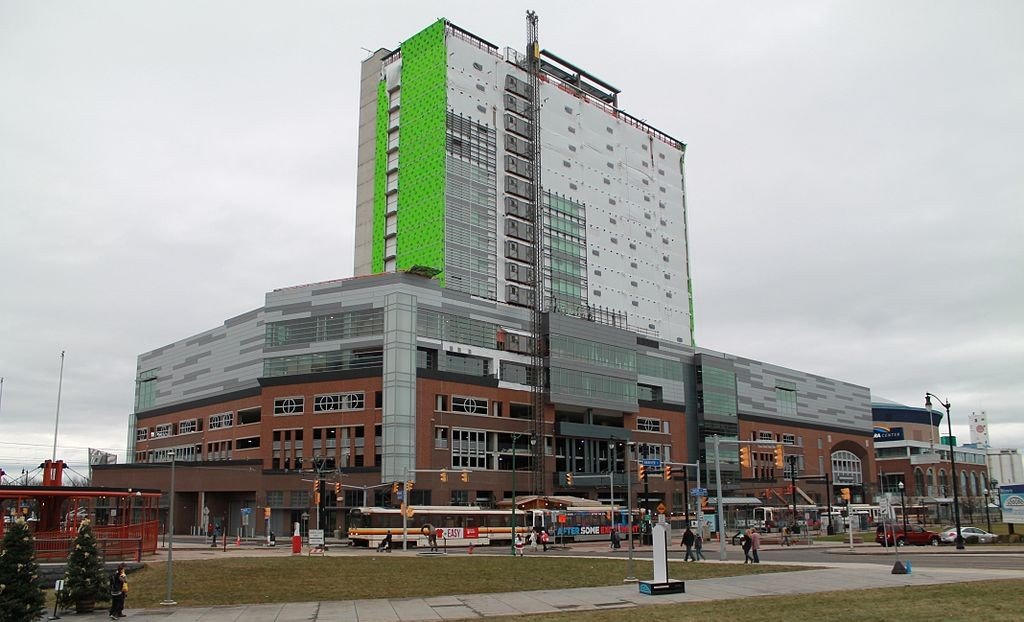 I constantly marveled at Buffalo’s housing stock. En route to Hertel Avenue, another commercial district on the north side of town, I drove past miles of well-preserved neighborhoods densely packed with two and three-story frame homes, many of them two-family “doubles” — “flats ” in Detroitspeak — and a number of block-club signs that helped explain why the areas look like they get a lot of tender, loving supervision.

One of the most unexpected sights was South Buffalo, historic home to a large and clannish Irish population, where the street signs in the Irish Heritage District along Abbott Road are in both Gaelic and English. “The neighborhood was unusually stable,” Buffalo native Tim Russert wrote in Big Russ and Me, his 2004 book about the influence of his father on his life. “Many of the families who lived in South Buffalo when I was growing up are still there today, often in the same house, a generation or two later.”

Buffalo came out well in my comparisons. In fact, I found myself constantly muttering, “I can’t believe this.” Buffalo seems to have managed its decline better than Detroit in many ways, but I also roamed through the east side, which is where many African-Americans live. Buffalo did not experience as much white flight as Detroit, but the city is highly segregated, which is both visible to a visitor and easily verified by statistics and studies.

The east side, sadly, reminded me of many older Detroit neighborhoods, with its gorgeous Polish churches, a spooky abandoned train station, empty lots and houses in various stages of disrepair. I saw a couple of people walking down pot-holed streets, talking to themselves.

“Buffalo is experiencing an economic boom, but the explosion will not automatically spark the revitalization of precarious East Side neighborhoods, an area consisting of black neighborhoods lying east of Main Street and north of South Buffalo,” two academics, Henry Louis Taylor Jr. and Jin-Kyu Jung, wrote in the Buffalo News in September.

“Blight and decay are slowly creeping across black East Side neighborhoods,” they continued, “where the signs of neglect and decay are omnipresent. Joblessness, low incomes and inadequate housing are fueling health issues, inadequate schooling, crime, violence, anger and rage.”

Taylor and Jung have identified a phenomenon that is shared by both Buffalo and Detroit: the prosperity that has taken hold in some neighborhoods has failed to trickle down to large swaths of the city. 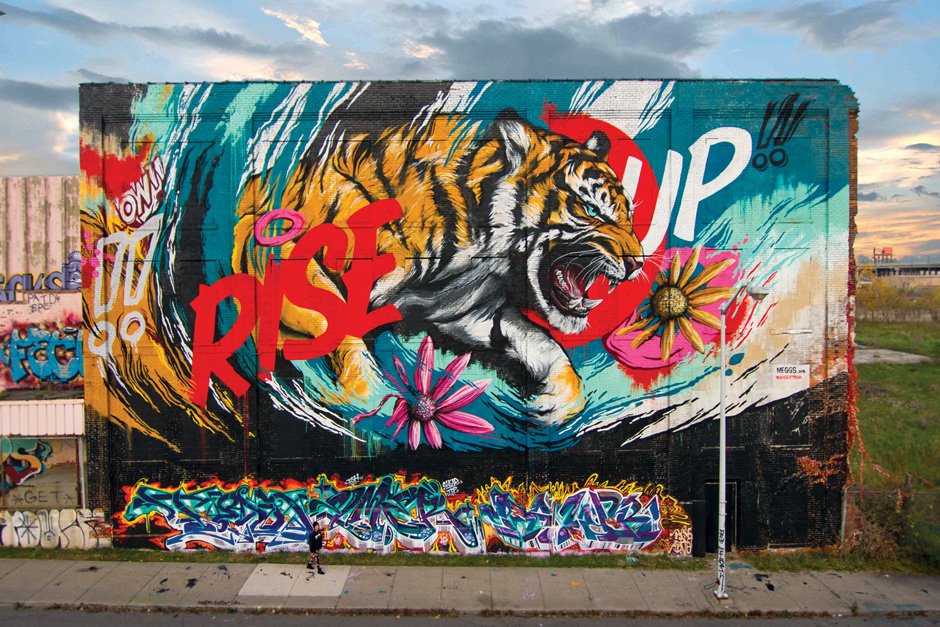 Australian artist David (MEGGS) Hooke painted the 6,000-square-foot mural — “Rise Up!” — on a derelict building in the Milwaukee Junction neighborhood of Detroit, MI. He’s one of many artists from around the world who have worked in the city in recent years. The work dwarfs the man standing on the sidewalk. [credit: Sal Rodriquez.]

Such Detroit neighborhoods as downtown, Midtown, Eastern Market, Corktown, and the riverfront are booming. That success, coupled with Detroit’s alternative cultural tradition, has attracted artists, entrepreneurs, fun-seekers, and capitalists from around the world. But the high-powered redevelopment is taking place in about 10 square miles, meaning much of the city’s 139-square-mile footprint has become a sarcophagus for dying streets and unfulfilled dreams, even though the new mayor, Mike Duggan, has shown he can improve such basic services as streetlights, emergency response, and abandoned-home demolition.

Buffalo, perhaps because it’s relatively small and overshadowed by Toronto and New York City, has been overlooked nationally, both for the long-term stability of many neighborhoods and its on-going resurgence. Detroit, on the other hand, receives enormous attention from media outlets around the world, for its remarkable shrinking and the rebirth of its core.

Rebounding from the long, hard process of de-industrialization is complicated and lengthy and beyond the abilities of any one mayor, no matter how talented. I’m fascinated with both Buffalo and Detroit, and I’m waiting and rooting for them to make their “turn-arounds” tangible for as many of their residents as possible.

In the mean time, I’m looking forward to biking down Bidwell Parkway in the summer time. And having a beer along Elmwood Avenue. I was wrong about Buffalo, and I want to do my penance.

Detroit native Bill McGraw is a staff writer for Bridge Magazine in Detroit. He was a reporter, sportswriter, editor, columnist and Canada correspondent during a 32-year career at the Detroit Free Press, and his writing also has appeared in the New York Times, Washington Post, Toronto Globe and Mail, National Geographic, Newsweek and the London-based History Workshop Journal.