Like Gilgamesh, Sir Gawain, Luke Skywalker, Batman, Harry Potter, and Katniss Everdeen, Minoo Shirazi has been chosen by the universe to battle evil. She has a sword, a side-kick-slash-boyfriend (anachronistically named Tyler), a revealingly short dress, and a flame-shaped birthmark on her left palm that allows her to shoot fire like the Human Torch in The Fantastic 4. Like these other incarnations of the hero’s journey, Minoo will discover her own true nature along the way. But, of course, there is the crucial difference with all but one of the above: Minoo, like Katniss, is a girl: a strong, sullen, independent minded and violent outsider who lets the bodies hit the floor even as she holds the moral center of the story. 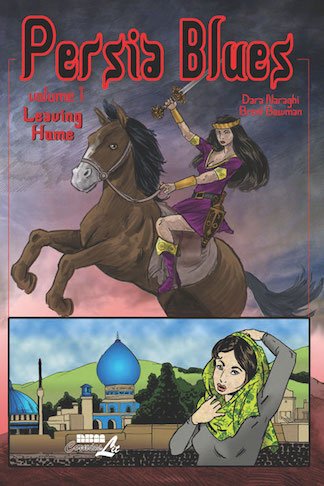 She is the creation of Columbus writer Dara Naraghi and his creative partner Brent Bowman, and the protagonist of their latest collaboration, Persia Blues, which won the SPACE Prize for best graphic novel at the 2014 Small Press and Alternative Comics Expo. It is the first in a trilogy that follows the heroine and her companions through two alternating but parallel quest narratives, one taking place in ancient Persia, the other in modern Iran. In the first interlocking narrative, Persian Minoo is a take-no-prisoners, supernatural warrior on a quest to discover the truth about her father’s death and the identity of her mother — a very archetypal journey. In the second storyline, Minoo is reincarnated as a feisty young woman in the city of Shiraz in twentieth-century Iran. Now in the modern world, Iranian Minoo is actually less powerful than her mythological counterpart; gender disparity in Iranian culture shackles her to a life of fear and anger.

Hardened female adventurers are in vogue right now, but Minoo actually outdoes Katniss in her ruthlessness and take-charge attitude. Naraghi wrote his Persian warrior this way for a purpose.

“There were multiple reasons why I chose to tell this story through the eyes of a female protagonist,” he says. “One was the fact that there are challenges and conflicts that are unique to a woman’s experience, living under Islamic rule in Iran. For example, the morality police enforcing the rules of hijab for women, or women not being allowed to attend soccer games. So there were very rich storytelling venues to explore with a female character.” 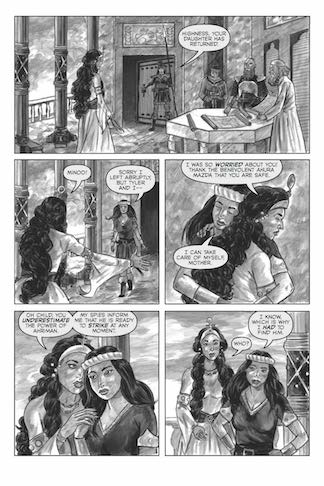 Naraghi knows this world. He was born in Iran and immigrated to America when he was twelve and already fascinated by the long running series The Adventures of Tintin, one of the most popular comics in the world. In addition to Persia Blues, he has written two other graphic novels: Terminator: Salvation Movie Prequel, based on the franchise that helped elect a California governor, and Witch and Wizard: Battle for Shadowland, a spinoff of James Patterson’s novel series. He has collaborated with artists as far away as Spain and as close as Columbus, where Naraghi began his scriptwriting in earnest after seeing a flyer for “PANEL,” a loose-knit, now defunct artists’ collective. He is fluent in Farsi and frequently visits family back in Iran where the idea for Minoo took root. And, as a father, Naraghi wants his stories to reflect the perceptions of a changing world.

“Another reason [that I created Minoo] was that I have a teenage daughter myself,” Naraghi says, “and I wanted to write a character that represented some of her points of view and traits, such as idealism, feminism, and independence.” 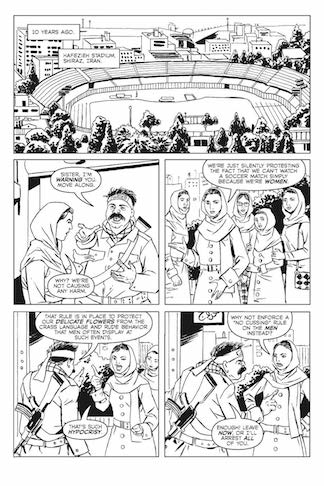 Ancient Persia with its supernatural villains, all male, stands as an allegory to the cultural turbulence in modern Iran at the same time that it offers a primer on the stories and mythologies of the Middle East. The stories include reference to Avesta (the mystical writings of Zoroaster), the Dakhmeh (towers where the dead are interred), the Anusiya (Persian horsemen), and the various deities and hybrid creatures. At the climax of this story is Purandokht, a mythic queen of Persepolis, who explains the flame-shaped birthmark on Minoo’s palm … but readers will have to buy the novel to find out what happens at the end of volume one, and how the narrative relates back to Columbus, Ohio.

Just as in a Hollywood movie, graphic novels are often the product of creative teams and partnerships. In this case, Bowman draws his black and white panels based on the script written by Naraghi. Graphic novel scripts look a lot like screenplays and even use some of the same terminology, yet there is a good deal more freedom in the graphic novel for innovation and exploration of style.

Just about a third of the way into Persia Blues, Naraghi and Bowman decided to use two “splash pages” (full-page illustrations) to depict the cosmic struggle between Ahura Mazda, the wise and benevolent god who created the world, and Ahriman, the destructive spirit who symbolizes wrath, greed, and envy. Ahura Mazda is associated with fire, the symbol of purity and life in the ancient Zoroastrian religion, and he wields a flaming sword and a flaming hand against the demonic Ahriman. Both wear ancient Persian crowns, but Ahura Mazda, being greater, wears the taller one. 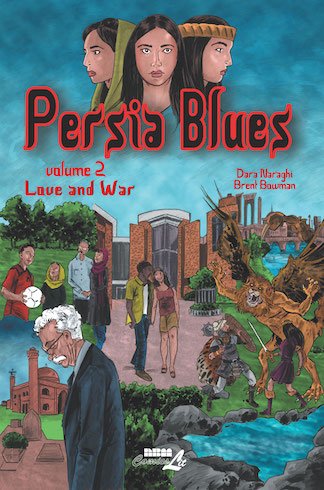 Beneath this metaphysical battle, our dreaming heroine, Minoo, sees her fate foretold in a series of swirling battle scenes between grotesque spirits, which pollute the earth because of Ahriman’s evil, and the fabulous creatures that are Minoo’s supernatural allies, including a soaring griffin and a giant horse with the head of an eagle. The latter hybrid creature is based on ancient griffin statues found in the ruins of Persepolis and believed carved during the Achaemenid Empire (550-330 B.C.).

Bowman, who studied art at Columbus College of Art and Design, draws in a wide range of styles and narrative genre, often working with writers on short horror narratives. He was inspired by classic fantasy, sci-fi, and horror comics from the 1970s and ’80s such as Marvel’s Savage Sword of Conan, and particularly EERIE and CREEPY, which chilled children’s imaginations in the days before Google flooded the Internet with nightmare graphics. This combination noir and penny-dreadful background is apparent in the pages of Persia Blues, which alternates visual styles: ancient Persia is dark and moody, as if the story is coming to us from a great distance full of smudged shadow and deep recesses of sky; modern Iran is primarily depicted in line drawings with brightly lit, page-white backgrounds, as if we are watching reality TV.

The second volume in the series, Love and War, came out at the end of last month, and Volume 3 will complete the saga in late in 2016. Despite his successes, Naraghi is not planning on quitting his day job as IT projects manager any time soon. “Even the big publishers like Marvel hire mostly freelancers,” Naraghi says. “Being a graphic artist is not even close to making a living.”