Belt Publishing announces a new Cleveland guidebook.  The book features listings of the city’s best cultural hotspots as well as essays about residential communities. Below is the introduction; purchase the book here.

Spend enough time reading “Best of Cleveland” listicles on the internet or browsing tourist brochures, and an image of Cleveland will likely form: a place with music, art, beer, ballgames, and skyscrapers filled with down- to-earth folks. It is a fine image and one that is connected to reality: there are few things better than a day spent at the West Side Market and the Cleveland Museum of Art followed by drinks in Ohio City overlooking Terminal Tower, and on such a day you may well find yourself surrounded by happy, shiny Clevelanders.

But that is also only one picture of Cleveland, and as with so much else of late, Cleveland tourism has become a story of haves and have nots: some places get all the clicks. This is where this book comes in. We wanted to pan out, look to the sides, and show other Clevelands, too — to let shine the hidden gems, stop to note the cracked glass, and poke into the shadows of what has been lost.

When we thought about how best to tell the story of Cleveland neighborhoods, we decided to canvass the block. We invited stories. Send us essays about your neighborhoods, we asked. It can be a pretty story or an ugly story, a tale from the past or a glimpse of the future. We did not define “neighborhood” (a corner? a ward district? a conclave of a certain demographic?) but let those interested in participating do that themselves. And then we read, delighted, as people from South Euclid and New York and Larchmere and Boston submitted essays that lit up the corners, alleys and bike lanes of the city and inner-ring suburbs. 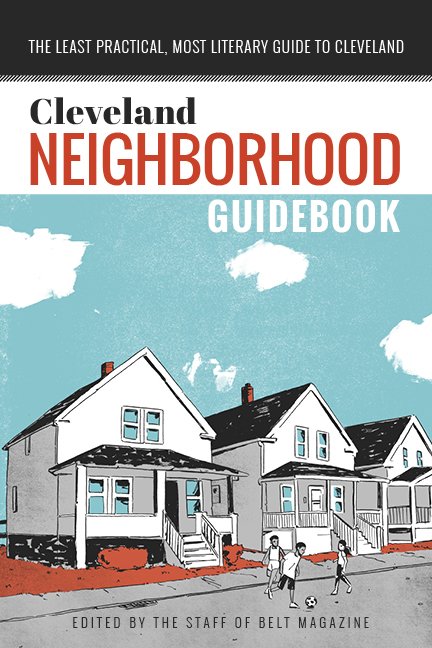 The result—the essays in this book—is more kaleidoscopic than Photoshopped. If you want to learn more about downtown, this book is not for you. This book is for those who want to understand the streets that radiate away from Terminal Tower, and who understand that as pretty as the city often is, it can sometimes be ugly. You will read about places no longer here, such as the Little Italy Historical Museum, and League Park, as well as increasingly popular areas such as North Collinwood and Asiatown. You will learn about Cleveland Heights’ natural history, Mount Pleasant back in the day, and Opportunity Corridors missed. The writers will tell you stories about starting a business in Ohio City, First-time homebuying in Detroit Shoreway, the unjustfied self-loathing of South Euclid, troubling developments in Tremont, closed schools in Lee-Miles, and a vineyard in Hough. Bound together, the essays portray a Cleveland as complex as its residents.

In between these essays we laced some surprises, aimed both at our increasing numbers of tourists (hi!) and residents looking for some- thing new to do: Belt Magazine Editors’ Picks for the best restaurants, dive bars, housing deals, breakfasts, and more. We also feature recommendations written by local experts on their picks for the city’s best nature, art, and music. We bet you will disagree with some choices, and we look forward to discussing those with you, perhaps over Chinese in St. Clair Superior or cocktails in Duck Island.

It is impossible to put together such a book and also be truly “representative” or “comprehensive,” so fair warning: there are stories of neighborhoods left untold and voices unheard within these pages. Perhaps a more accurate title would be “A Partial, Good-Faith but Not Nearly Comprehensive Enough Cleveland Neighborhood Guidebook.” We intend to keep filling in the gaps and add more pins to our map, at our online home, Belt Magazine,  where we are always eager to publish Cleveland’s stories.

Thanks to all the writers and sponsors for enabling the making of this book—and here’s to you, dear readers, for closing the circle by hearing these stories, thus completing this new story of Cleveland. We hope to see you soon, somewhere around town.

To order your copy of the Cleveland Neighborhood Guidebook, purchase online or at the following stores: Loganberry Books, Mac’s Backs on Coventry, Appletree Books, Guide To Kulchur,  CLEClothing, Cosmic Bobbins and Native Cleveland.