Having lived fifteen years in a small town in a remote part of the Midwest — dubbed Forgottonia in the 1970s — possibly the most interesting change I’ve observed over time has been the emergence of a small but dynamic Mexican population.

In the spring, after submitting final grades for my students, I love to pedal my bike on a short tour of different parts of my adopted region, basically the heart of the corn belt. There are few better ways to explore an area than by bike. Slow enough to really see things but fast enough to cover a good amount of territory.

During my rides, I have had the good fortune to see some of the beautiful rural landscapes of the Midwest: west, central, and northern Illinois; eastern and northeastern Iowa; southwestern Wisconsin, and; northeastern and southern Missouri (though the Ozarks aren’t Midwestern, that’s for sure). In my car and via Amtrak, I also have explored many other rural parts of the region — at least until my governor slashes the Illinois state contribution to intrastate Amtrak lines.

I’m not talking about the local Taco Bell, where precarious whites, young and not-so-young, work for a minimum wage and little joy. (Chipotle and its new, more worker-friendly policies have not yet jumped off from metro areas to colonize the hinterlands.)

And I’m not talking about sophisticated Mexican restaurants in cities like Chicago, where celebrity chefs like Rick Bayless prepare delicious Oaxaqueño cuisine.

No, I’m talking about your generic but independent Mexican restaurant that appeals to gringos, and includes all the expected “Mexican” dishes along with margaritas galore.

In my home base of Macomb, I head to Guadalajara (which I prefer to El Rancherito). In Rushville, Illinois, everyone goes to Los Charros. In Beardstown, which now is about half Latino, there are many choices including Fiesta Grande or La Familia. In Monmouth, Illinois, La Tapatia is located just off from the confusing square. In Galesburg, Hacienda Jalisco definitely is my go-to place. In West Branch, Iowa, Agaves Mexican or Casa Tequila. In Farmington, Missouri, Casa Sol or El Tapatio. 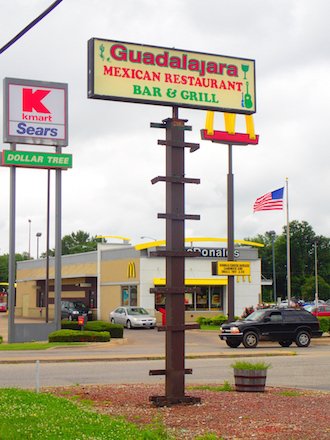 All across the rural Midwest, many locals know that the best food in their towns is Mexican. It’s often the restaurant that is most busy. It might be the only restaurant in town, or the only one other than the stereotypical diner serving “American” food. (I’m not counting pizza from the Casey’s gas station.)

How did this happen? Why have Mexicans colonized el campo del norte?

Like nearly every other immigrant group to the United States (and other nations), the most common reason that poor folks leave their home nations is poverty — that is, they come searching for better job prospects in some other land. In the rural Midwest, that often means working in slaughterhouses, euphemistically — this vegan feels compelled to point out — called “meatpacking” plants. (Which is kind of like “harvesting,” i.e. hunting deer, but that is the stuff of another essay.)

In the early 20th century, meatpacking work was horrific. Many will remember a high school English class when the assignment was to read Upton Sinclair’s still-powerful, 1906 novel The Jungle. Set in the greatest of all the meatpacking centers, Chicago, the novel examines the miserable work and living conditions that European immigrants experienced in that era. Carl Sandburg, a native of a small Illinois town called Galesburg, later moved to Chicago and composed the legendary poem declaring it the “Hog Butcher for the World.” 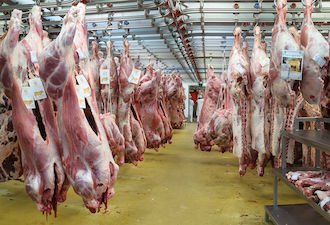 In the 1930s and 40s, a powerful union emerged in this industry, the United Packinghouse Workers of America (UPWA), which transformed the work. Sinclair’s novel ends with a pitch for unionism and, even, socialism as a solution for the suffering of the urban working class. He famously declared, “I aimed at the public’s heart and by accident hit its stomach.”

And while it might be gross to kill cows, hogs, and chickens for a living, at least the unionized factories paid better and the conditions became much safer. In meatpacking, the UPWA, a very progressive union, ensured that the workforce that consisted mostly of women and people of color (especially African-Americans and Mexican-Americans) got paid better as well as equally to white men. Suddenly, these jobs that had paid poorly and been dangerous were gateways to the middle class, and much in demand.

Alas, industry detests unions, as they drive up costs. Hence, the main meatpacking companies relocated themselves to rural areas, forcing unions to reorganize with an entirely new workforce — one less familiar with unionism and more conservative (as rural communities generally are). In the process, Chicago’s once-mighty industry, which employed tens of thousands of people, died. All that remains now of the stockyards district is the impressive gate designed by Daniel Burnham. Other meatpacking centers like Kansas City and Omaha suffered similar fates. Nevertheless, in the 1950s and 60s, meatpacking unions achieved some success in lining up new members, albeit less so. 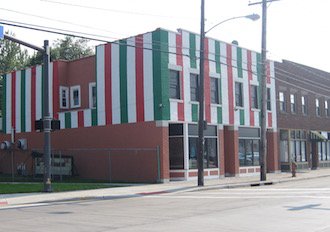 After the Immigration and Nationality Act of 1965 reformed a previously racist and restrictive quota system, however, the meatpacking industry resorted to another tried-and-true means to undermine unions and reduce costs: immigrants, both documented and undocumented. Over time, the union declined further, resulting in further declines in wages, less investment in safety, and ever-more “illegal” immigrants in a downward and vicious cycle. Once again, the work is dangerous and poorly paid as well as simply awful — but Mexicans and other immigrants do it.

Which, of course, brings us back to Mexican restaurants in central Illinois.

Everyone knows rural America generally and the rural Midwest in particular continues to lose population. Nowadays, only 15 percent of the population live outside of metropolitan areas.

Fortunately for me and other rural Midwesterners, the one group that has increased its numbers has been peoples from across Latin America, and especially Mexico. In fact, as my colleague Julia Albarracin notes in her forthcoming book on the subject, in the early 21st century the Midwest experienced the fastest rate of Latino population growth compared to other regions of the country.

Some folks in the rural Midwest, long the whitest and perhaps most isolationist part of the country, might not be happy about this reality. Nevertheless, demographics are destiny… and, fortunately I would argue, that destiny can also be culinary.

Indeed, many rural Midwesterners would agree that, if nothing else, their food choices have improved thanks to the arrival of significant numbers of Mexican workers in their midst. So, this weekend, as we celebrate the nation’s birthday, let me give a shout out to mis amigos in downstate Illinois with a “Feliz Día de la Independencia” and a simple request: please pass the tortillas!

___
Peter Cole is a professor of history at Western Illinois in Macomb. Currently, he is writing a book entitled Dockworker Power: Race, Technology, and Unions in Durban and the San Francisco Bay Area. Cole also has an appointment as Research Associate in the Society, Work and Development Institute (SWOP) at the University of the Witwatersrand in Johannesburg, South Africa. Follow him @ProfPeterCole

We are currently running a fundraising campaign; support independent journalism and get great rewards.