John G and the State of Cleveland Underground Comics

Editor’s Note: Another installment of our intermittent collaboration with Cellar Door Cleveland, this piece is an artful introduction the the Cleveland comics scene and John G, artist and Genghis Con impresario. And the guy who draws those gorgeous illustrations for Melt Bar and Grilled. This article was first published on November 25, 2013. 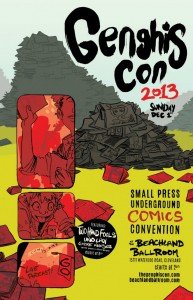 John G, co-founder of the underground comic and small press convention Genghis Con, reflects on five years of celebrating the art of print, the changing comics scene, and the importance of diversity in the world of conventions.

The crux of Halloween and early November is a time of hustle for John Greiner, better known as the Renaissance man of visual dexterity behind the name John G. In the Gordon Square neighborhood of his home and studio, he flips through a little red booklet, riffing off sections of the Melt Bar & Grilled menu with precision, rough sketches of their iconic identity he’s been commissioned to create each month between the booklet’s pages.

November is full; Greiner thinks about how he’s not beyond burning midnight oil to wrap up the fifth issue of The Lake Erie Monster, his project with artist Jake Kelly, between putting the final details together for the fifth Genghis Con, the annual Thanksgiving weekend comic and small press convention he helped to found, flanked by the collaboration of Kevin Czapiewski and Scott Rudge. He won’t, for the next hour, set down the Micron pen anchored between inked knuckles branded with the words DRAW HARD.

He won’t, for the next hour, set down the Micron pen anchored between inked knuckles branded with the words DRAW HARD.

For five years, Genghis Con has brought together a region of comic artists, printmakers, zinesters, and authors at the Beachland Ballroom. While this year boasts seasoned exhibitors—names like Derf (My Friend Dahmer) and Brad Ricca (Super Boys)—alongside up-and-coming talent, its fifth anniversary finds the convention immersed in full-fledged multimedia. A returning podcast, Comics Are Go!, helmed by Scott Rudge’s store of the same name, will segue into a first-time music line-up featuring Two Hand Fools, Uno Lady, and Smoke Noises.

Disenchanted with the lack of conventions in the city, Greiner and Rudge founded Genghis Con on the mission of keeping overhead low to be able to host exhibitors from across the spectrum—“Novice or beginner to professional or legendary status,” Greiner says. (Harvey Pekar was alive at the time and on their wish list.) Like most independent events in their infancy, he jokes, “It was kind of this ambitious thing and the first year, we had no idea if anyone was going to show up.” The rest is history. 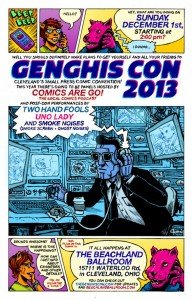 “I don’t know if it’s because people just knew about it or if the Beachland is magnetic. There’s something about just making a decision and actively releasing that choice in the world and the world either accepts it or it doesn’t,” says Greiner. “And for whatever reason, Genghis Con was accepted. And I think part of that is we’re trying to keep it as open and accessible as we can.”

Throughout his time with Genghis Con, Greiner’s name has become one ingrained in the illustrative realm of Northeast Ohio; he is a veteran of the comic book world from his humble beginnings just out of high school, to a transition to gig posters, to his eventual collaboration with Jake Kelly on the celebrated comic anthology, The Lake Erie Monster. The high caliber of his freelance grind and expansive output cemented his authority, whether through poster art or comic books, as a visual storyteller.

“I love doing posters because I treat it as dissolution of a story. When I draw a poster I try to make it so that you can look at it and tell that there’s a narrative, almost like a comic book cover. Your brain as a reader of a single image can fill in, ‘I want to know if maybe it was this, maybe it was that’ — it’s open to interpretation,” he says. “Creating compelling visuals for that purpose is something I try for with everything I do, but with comics I can actually execute the beginning, the middle, and the end.”

One of the shifts in the convention world Greiner notes is, along with a booming culture, a spike in diversity.

Like his own evolution over the years, Greiner has had the opportunity to watch and cultivate the scene as it grows in front of his eyes. He points to emerging newcomers like the Oberlin Comics Collective or Liz Valasco, who began exhibiting three years ago while still a student, or Kevin Czapiewski, who went from a Genghis Con attendee to an exhibitor to an active organizer.

“Kevin goes to a lot of press shows and a lot of comic conventions. If anyone knows anything about all these shows, he would be the guy,” says Greiner. “It’s a strange dynamic where I’m aged out of this immediate, young happening. And more young people start doing new things and showing up every year.”

One of the shifts in the convention world Greiner notes is, along with a booming culture, a spike in diversity. Building Genghis Con—much like the print ethos itself—around the importance of accessibility, he’s made an extensive effort to curate an eclectic roster, whether exhibitors or this year’s music line-up.

“There’s a very interesting thing happening right now, which is the development of the community has started to grow rapidly. I went to a small press expo in Bethesda, Maryland maybe five years ago and it was half the size it is now. And I’d say there were maybe 20 percent female exhibitors,” he says. “This year, it’s doubled in size and at least half the exhibitors were females. And that was one of our goals early on; to not just to be all-inclusive but to foster the environment where everyone can come. By including as many females as we can find, one of our objectives was to make it as diverse as possible.”

“And what happens with Genghis Con is there’s an energy; there’s conversation, there’s discourse.”

In five years, Genghis Con has grown into more than a showcase for local talent. Whether streaming podcasts like Comics Are Go!’s ”There’s Something in the Water” on the history of comics in Cleveland or packing a legendary concert hall with artists, Genghis Con has spent the last half of a decade leading dialogue about the ever-changing print culture.

“There can be an introverted aspect to it all—you’re isolated, you’re at your desk, you’re doing your work by yourself. At a lot of conventions, exhibitors are doing commissions, looking down at their work. So you get these people in a room and no one’s talking to each other,” Greiner says. “And for whatever reason, maybe it’s because the Beachland is this rock club where it’s pretty close-knit, there’s not a lot of room to go hide in the corner. And what happens with Genghis Con is there’s an energy; there’s conversation, there’s discourse.”

Keep up with Genghis Con on their official website.