Journey to the Epicenter of Something: Cleveland Meets RNC

“This is the Johnny Manziel of conventions.”

That quip has been ringing in my head, a very Cleveland one-liner shared by a friend a few days before I set off to spend a week at the Republican National Convention. Now as I make the short drive from my home in Akron, it’s there again, the familiar tone of the hard-won wisecrack. We wait 80 years between political conventions, and this is the one we get?

I guess we can’t have nice things.

Many of us who live in and around the CLE have been struggling with a real conflict between excitement over the international attention the convention brings to our region– particularly on the heels of the Cavaliers’ historic championship just a few weeks ago – and the concern that something will go terribly wrong.

It’s the tension between believing we are what we have been known to be, or what we are becoming.

When I emailed my cousin that I’d be here in the thick of it, his response was, “Wow. I bet that’s (insert adjective).”

When I asked my friend Dan Moulthrop, Chief Executive Officer of the Cleveland City Club, about his pre-convention mood, he said he vacillates between, “This is awesome,” and, “Please don’t break our city.”

It’s like we don’t know how to feel. Cleveland has a long history of gloriously expecting the worst and wryly embracing it when it happens, as though our repeated downfall is evidence of our shared self-knowledge. In that lies an odd comfort, maybe even wisdom.

For some, that’s a tired, outdated narrative, one that certainly can’t jibe with the Cavs breaking the 52-year, landmine-riddled drought of sports championships, putting this city in an especially good mood. Other good things have been happening too, countering some of the bad things that have happened in recent years (Tamir Rice, political corruption), enough that the narrative is currently, strongly, a matter of perspective.

It’s very telling that when ESPN’s 30 for 30 documentary Believeland debuted this spring, chronicling the city’s pro sports wasteland,  it was intentionally kept a half hour short, so that a new ending could quickly be filmed, edited and inserted depending on which way the NBA playoffs turned.

The Cleveland story is in play.

So now as the final hours tick down along with the remaining miles to Cleveland, I’m actively looking for signs of how I should feel. And I find a very literal one, looming above the highway, one of those Amber Alert-type boards, black with digital orange warning letters: 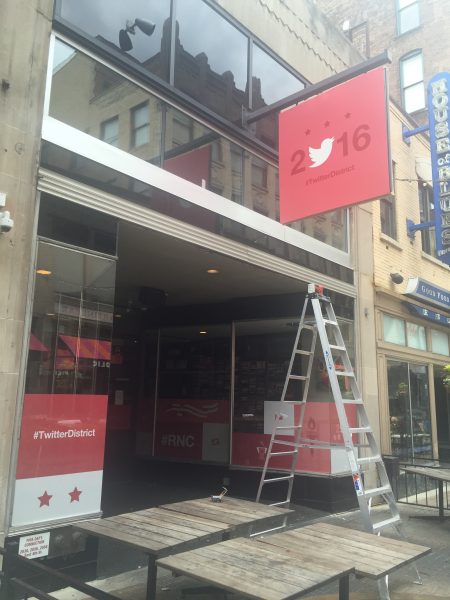 A group of us who will be working with Belt are gathered on the patio of this Irish pub, a working dinner as we hash out plans for the week and share important information such as the confirmation that Scott Baio will indeed be a convention speaker and that the moon is about to be full. Most are from other places – Chicago, Minneapolis, Brooklyn, Detroit, even London. My role is Local Guy.

As a Northeast Ohio lifer, I try to explain this delicate balance of ours. In other places, even if the convention was a disaster, few would feel as though their community, much less their identity, was defined by that. But in a long-suffering place, the confidence tends toward fragility.

Suddenly, an explosion cracks the conversation.

We all look around, startled, shaken.

The server waves her hand dismissively.

“There’s a bottle rocket factory next door,” she says.

These sporadic overhead concussions continue throughout the rest of the evening, and it’s hard not to be on edge, especially in a month of terrible violence and the uncertainty of the days ahead.

On the way back to the house where I’ll be spending the week, I see a T-shirt in a store window: “Make America Cleveland Again.”

My mind wants to amend it to “Make Cleveland Cleveland Again.” 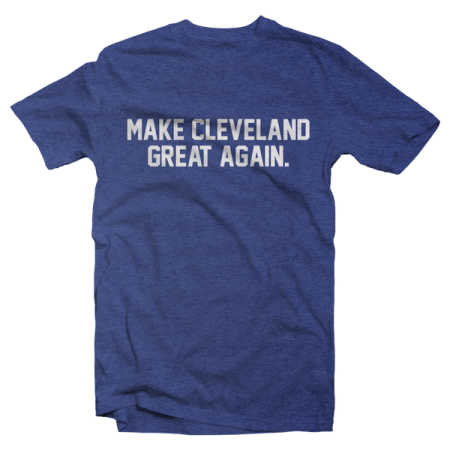 The plaza surrounding the Cuyahoga County Soldiers’ and Sailors’ Monument is peppered with people snapping photos and a few early protesters holding signs. One of them is Anita Rios, a 61-year-old Toledo resident who ran as the Green Party candidate for Ohio governor two years ago. She’s sitting alone, with a handmade cardboard placard that protests Donald Trump’s rhetoric against Latino immigrants.

Softspoken and unassuming, wearing a canvas sun hat, she confesses that she’d rather “be home making soup and working in my garden.”

But she made the predawn drive to Cleveland to speak at Public Square’s open microphone on the subject of women’s reproductive rights.

I ask her if, as an Ohioan, she also feels this ambivalence about the convention.

“I had many second thoughts getting in the car this morning,” she says. “Just … safety. I’ve never been arrested. I don’t even want to have a bad day.”

As I leave her to her quiet demonstration and make my way around the elaborate memorial structure – beautifully restored in 2009, strong evidence in favor of the “comeback city” narrative – I run into Ted Strickland, the former Ohio governor who’s now running for U.S. Senate.

I ask him the same question, about what mark this week might leave on Cleveland.

“I think everyone – Democrats and Republicans – is happy Cleveland’s been chosen,” he says. “Certainly following the victory of the Cavs, I think this is kind of a special time in the history of the city. If there’s any apprehension, it’s not the city. It’s the times. Life for all of us has been increasingly unpredictable.”

As I leave Public Square to begin making my way toward the epicenter of activity in the Gateway district, I see a line of traffic stopped on Ontario. At the front is a big black van with an “Aljazeera Media Network” sign in the window, followed by cars with license plates from Florida, Louisiana and Missouri, intercut with a few familiar Ohio plates.

The driver of the Volkswagen Beetle from Missouri signals to me from his open window. 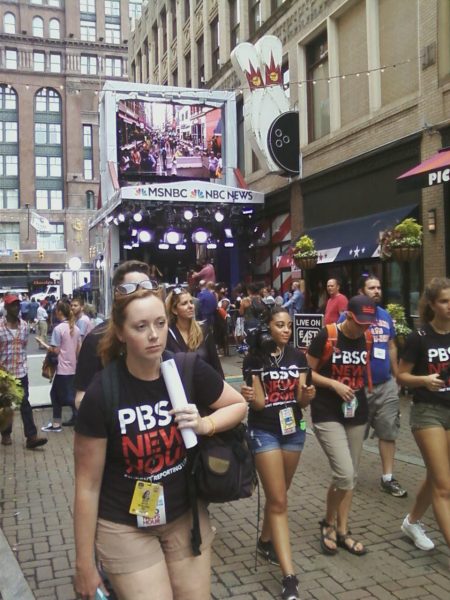 The closer I get to what feels like the convention, the less it seems like the real Cleveland, and the better I feel about everything, other than perhaps the general artifice of American spectacle.

It’s starting to feel more like a carnival, with onlookers and selfie-takers filling the street, and a dude wearing a polar bear costume, and another dude pulling a fellow on a leash, bellowing in an overplayed Southern accent, “Kick my dog for Trump,” and the very particular skin tones and hair styles of celebrity journalists who are escorted here and there by groups of handlers, and who leave me wondering if I should recognize them and feeling slightly bad for my inability to do so.

East 4th has become Cleveland’s tiny little South Beach-y district for celebrity chefs and cosmopolitan Rust Belters, a proportion that feels right for our general sense of self. Cleveland should never be very fancy, but deserves to be a little fancy.

This week, however, the East 4th building facades are overlaid with national media banners. CNBC is broadcasting live from a platform across from CLE Clothing Co.; Twitter has overtaken the Greenhouse Tavern. Considering the overwhelming number of individuals wearing press credentials and hauling camera tripods, I’m thinking it might have been better to just arm the reporters and let the riot police have the week off.

Overlooking the “CNN Grill” hangs a United Church of Christ banner even larger than the one touting the cable news monolith: “We have faith, in Cleveland.” 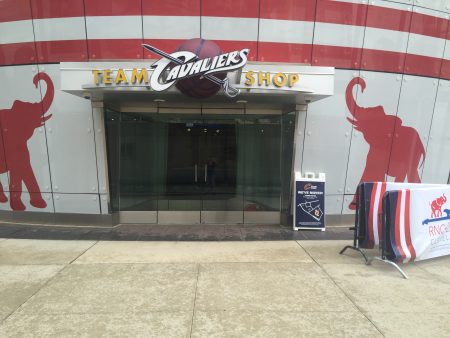 This all feels more and more personal to me, the nearer I get to what I suppose has been my destination, the arena. Like many who live in Northeast Ohio, this stretch of central Cleveland is connected to Indians games and family dinners, to my work, to concerts, to the recent championship parade, to a sense of place.

Our apprehension has been tied to things not of our making, to the unrest and violence across the country, and to the distinctly belligerent style of Donald Trump, the Republicans’ presumptive nominee, and even to the nervousness about that presumption, the worry that some shocking turnabout could happen on the convention floor, erupting into chaos. We are, as Howard the Duck said, trapped in a world we never made.

Elements of these four days will linger. Some are known. In prettying itself up, the city has gotten a lot of new stuff that it will get to keep. History is being made. And in a way, the happenstance of a notorious convention landing in Cleveland is even itself open to interpretation. As Moulthrop pointed out, “This is far more interesting than the Romney-Ryan convention.”

And of course some are unknown.

For now, I choose to take away a single image that I expect will linger with me. A very familiar sight – a Cleveland snowplow truck – employed in most unusual fashion: parked at the Bolivar and East 9th entrance to the Q, plow down, back end to the arena, stolidly blocking the road.

I have no idea what the specific logistical function was, but that was a Cleveland I understand, pulling out all the stops, trying to get it right, using whatever we’ve got, hoping for the best, prepared for the worst. Even a July blizzard.

David Giffels is a Belt RNC Fellow, whose books include The Hard Way on Purpose: Essays and Dispatches From the Rust Belt (Scribner 2014). A former Akron Beacon Journal columnist, Giffels has had work published in the New York Times Magazine, Parade, the Wall Street Journal, Esquire.com, Grantland.com, Redbook, and many other outlets. He also was a writer for the MTV series Beavis and Butt-Head. He is an associate professor of English at University of Akron, where he teaches creative nonfiction in the Northeast Ohio Master of Fine Arts Program, and a contributor to Belt’s The Cleveland Anthology and the forthcoming Akron Anthology.