No Surprise: The Rust Belt Knows What the Pundits Don’t

After months and months of media coverage declaring “economic populism” the theme of the presidential campaign – and for both parties, no less – it would be easy to succumb to short-term amnesia and assume that this has always been the case. It hasn’t. Hillary Clinton and Jeb Bush were the favorites as recently as November. Since then, Bush’s campaign, like a dying star, has collapsed under the weight of its own expectations. And Hillary Clinton, though still leading the delegate count, has gone more rounds with Bernie Sanders than most people predicted she’d be forced to, notably here in the Rust Belt. And, ever the cagey politician, to even get this far she’s had to appropriate some of his rhetoric along the way. In Michigan, a total of 1,078,973 people combined voted for two candidates that are hostile to the way we currently conduct trade. In Illinois it was 1,519,506. In Ohio, 1,241,134. How could economic dissatisfaction on this scale come as a surprise to what Nadine Hubbs calls “the narrating class”? There are two reasons. For one, pundits consistently ignore the economic concerns of the working class – at least until election time. Secondly, those pundits haven’t had their jobs outsourced or automated. Yet. 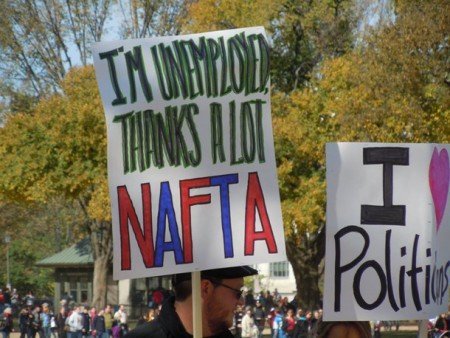 Donald Trump is fond of saying that he doesn’t believe in free trade, he believes in “smart trade,” citing our massive trade deficits with Mexico and China as evidence that their “street smart” leaders are playing our own leaders for fools. I think it’s a rather optimistic assessment. Wouldn’t it be nice if the only problem were that our leaders are naive? But the numbers are so staggering that it seem impossible for them not to notice. In 2011 alone, our trade deficit with China was responsible for eliminating 2.7 million jobs. Almost 77% of those were manufacturing jobs. Since the middle of the century, men in their prime working years without jobs have tripled. The statistics go on and on, but the point is that, demographically, working class people are carrying the financial burden of these disastrous trade policies. And, as you probably know, geographically the cities in the Rust Belt do.

So, for now at least, middle class Americans, Americans who work with their bodies and hands as opposed to manipulate abstract symbols, have been on the losing end of our prevailing economic logic. Things will change. There’s an easy way and a hard way, and whether or not the stunned elites realize it, electing a candidate who can at least entertain the notion of being skeptical of unfair trade is the easy way. The hard way would be for the jobs of lawyers, doctors, pundits, and the Washington elite to disappear also. It’s the next logical step in the telos of a rapacious marketplace monomaniacally focused on increasing shareholder value to the detriment of actually having a consumer class. The technology is almost here. And if it sounds crazy, imagine going back in time to 1955 and showing an autoworker in Detroit pictures of his city in 2016. Then tell him all the jobs went to China and Mexico. He would have been too busy doubled over laughing to call plant security.

Scott Beauchamp is a writer living in Portland, Maine. His work has previously appeared in The Paris Review, Al Jazeera, The Atlantic, and Bookforum, among other places.

Other pieces by Scott Beauchamp can be found here.