Which Northeast Ohio Will Show Up To The Gay Games? 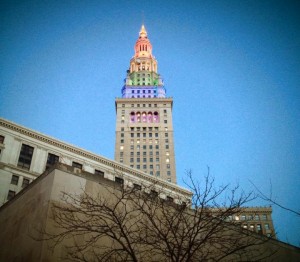 To say that Ohio has not been very LGBT friendly over the years is an understatement. In 2004, voters overwhelmingly approved a constitutional amendment banning gay marriage. In 2013, there were three transgender murders in Northeast Ohio, and several customers of a gay bar on the west side of Cleveland were attacked by homophobic teenagers. According to the Buckeye Region Anti-Violence Organization’s (BRAVO) statistics, in 2012, Ohio remained one of the top reporting states for violence against the LGBT community, which includes 19,684 same-sex couples living in Ohio, according to the 2010 U.S. Census.

So as Northeast Ohio prepares to welcome the Gay Games (GG9) next week, one can’t help but wonder if this will be a step towards more tolerance — or a terrible disaster.

On August 9, an estimated 20,000 to 25,000 members of the LGBTQ community are expected to arrive in the Cleveland-Akron area to either attend or participate in the Gay Games. Executive Director Thomas Nobbe said they are expecting about 8,000 participants representing 40 plus countries and just about every state in the union. Ohio will have the largest contingent of participants with almost a thousand people, the majority of whom are from Northeast Ohio. But will this region be prepared to handle it?

Since these are the first Games to be held in the U.S. since 9/11 and the Boston Marathon bombing, there will be a heightened awareness of the need to ensure the safety of participants, volunteers and spectators.

“All major events require security efforts and the Gay Games is no exception,” Nobbe said. “We have been working with law enforcement agencies throughout the region on a regular basis over the last year.” But Jacob Nash, founder and president of Margie’s Hope, an organization designed to assist transgender individuals in need, has concerns about the safety issues surrounding the games — especially when it comes to the police. “I am hesitant when it comes to the training of the police departments in reference to the transgender community,” Nash says. “I want to be sure that the officers are fully equipped to handle and respond to everyone in a way that is fair and respectful.”

The LGBT Center of Cleveland worked with the Cleveland Police to train officers on cultural awareness and sensitivity. An Akron Police Lieutenant currently serves on the Gay Games Board and is working to ensure the Akron Police are trained and prepared as well. And cultural competency training was offered by the Diversity Center of Northeast Ohio in order to prepare businesses for the influx of visitors.

This is the first time the games, which started in 1982 and are held every four years. are being held in a region as small as northeast Ohio. Other games have been held in large metropolitan areas with large LGBT communities, such as San Francisco, Vancouver, Sydney, Amsterdam, New York City and Chicago. The last games, in 2010, were in Cologne, Germany and the 2018 games will be held in Paris.

Nobbe is confident that the region, despite its size and relative small numbers of LGBT residents, will embrace the Gay Games participants. “We have corporate sponsors who have come on board that would have surprised people five years ago,” he explains, and mentions the Eaton Corporation, Lubrizol, Parker Hannifin and Sherwin Williams. “I also think they have a good number of employees that are LGBT and they would like to see their companies show that they embrace diversity.”