“This Is Not America. This Is Dearborn.”

(Reporter Nikita Mandhani traveled to the Detroit metropolitan area on a reporting trip sponsored by the Social Justice News Nexus project at Northwestern University’s Medill School of Journalism. Each Friday this month Belt presents stories exploring life and challenges for Middle Eastern immigrants and refugees and other diverse residents of Dearborn, Detroit and Hamtramck. Read Part 1 here and Part 2 here (both with Bian Elkhatib). The third installment follows.)

Nestled in a corner of the Flying Carpet Café with some of his favorite Lebanese delicacies, Nagib Kadri smiled a few times at the mention of his birthplace in Lebanon. But he calls Dearborn his real home.

In this city bustling with Middle-Eastern restaurants, grocery stores and sweet shops, residents wake up to the call of Islamic prayers and unreservedly flaunt their head coverings, beards and language, making Dearborn a unique city in the U.S.

“If you live in a community like this, you don’t feel any discrimination,” said 55-year-old Kadri, who moved here with his family in 1985. “In other cities, people look at your beard and the way you dress and assume that you are different. They treat you differently.”

According to the American Immigration Council, Arab-Americans made up 46.5 percent of Dearborn’s population in 2013, making it the city with the largest proportion of Arabs in the U.S.

“In Dearborn, you don’t feel like a stranger,” said 19-year-old Zeinab Bazzi, who feels comfortable donning her Islamic head-covering, the hijab, and conversing with people in Arabic regularly. “When I first came here from Lebanon seven years ago, I used to get happy on seeing Arabic (bill)boards across the city.”

Some residents said that living in a city where people follow their culture and faith made it easier for them to maintain their identity and traditions. Having mosques, community centers and halal food stores in the vicinity helped them feel closer to home.

Imad Elbgal’s parents moved to the U.S. from Yemen before he was born. They lived in Oakland, California before finally arriving in Dearborn. Elbgal, 25, expressed that they “felt isolated” because Oakland had a small Arab population.

“I feel comfortable practicing my religion no matter where I am,” he said, adding that having a majority of the population get up in the morning to pray in a mosque certainly helped him follow his faith more effortlessly.

For some Muslims in the U.S., facing discrimination or censure has become common over the years. Sometimes, this misrepresentation of or hostility to their faith also causes them to stay in Dearborn as opposed to living in any other American city. 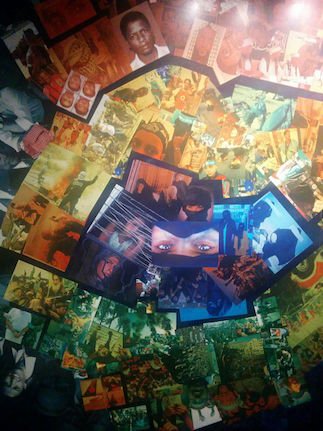 A picture collage showing the faces of Arabs is on exhibit at the Arab-American Museum in Dearborn, Mich. [credit: Nikita Mandhani]

“My wife wears a hijab,” said Riyadh Almesaibeli, 40, who came to the U.S. from Yemen in 1995 to find better opportunities. “She had to face verbal discrimination in some other cities. If we lived in a different area, we’d be facing this every single day.”

Almesaibeli added that he wanted his kids to move out of their comfort zone and live with people from other communities.

“I personally like it here but maybe I lack the love of challenge,” he said, pondering whether he should experience life in other parts of America.

Though he is worried about discrimination, he appreciates the aspects of American culture that celebrate unconventional attitudes and individuality. He noted his decision to pursue a Masters degree at a relatively old age.

“It’s hard to do this in Arabic countries,” he said. “This country really builds you up. You may not be great but you keep going.”

Over the years, with the settling of Arabs from Lebanon, Yemen, Iraq and Syria, Dearborn inadvertently became a charming Middle-Eastern city within the U.S. For its residents, the city is not just another American suburb, it’s home.

Smiling at her initial disbelief on witnessing a city so similar to her town in Lebanon, Zeinab Bazzi said, “My cousin told me then: ‘This is not America. This is Dearborn.’”

___
Nikita Mandhani is a graduate student at the Medill School of Journalism. She is keen on covering social justice issues, specifically those revolving around refugees and immigrants. Originally from India, Nikita loves to travel and try out different cuisines while talking to people and extracting human-interest stories from their daily lives.