On Karic, Marinaro, And Orf: Remembering A Youth Spent As A Cleveland Crunch Fan

I was never good at soccer, but that didn’t stop my parents from pretty much forcing me into the sport. Born and raised in Bay Village, Ohio, home of World Cup goalie Brad Friedel and several state championship teams, I knew from an early age that, in our upper-middle-class and mostly-white town, soccer was a way of life. Either you played it or you didn’t, and if you didn’t, what was wrong with you? Saturdays were spent at Cahoon fields playing for the city’s rec league, and Sundays were spent playing travel soccer. (My birth year fielded three girls’ travel teams alone.) 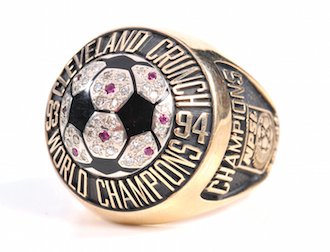 And because so much of my youth was spent playing soccer, thinking about soccer, or watching soccer, my parents pretty much assumed I liked soccer. But while I did, in a way, I think I was more enamored with the concept than the actual gameplay. I was into watching the 1994 World Cup as it came to America, and when I played, I was into taking other players down hard. I played nasty, and for no real reason given, again, that I was awful. (Had girl’s football been an option then, I probably should have played that instead.)

I did like watching soccer, though, and thus, like so many Cleveland kids, I became enamored of both the Cleveland Force and the Cleveland Crunch. The two indoor teams ruled the North Coast from 1978 to 1988 and 1989 to 2001, respectively, with the Force essentially becoming the Crunch after the original team folded in ’88. Both the Force and the Crunch were winning organizations, with the Crunch winning the National Professional Soccer League championships in 1994, 1996, and 1999 under the guidance of the “Dynamic Duo” of Hector Marinaro and Zoran Karic. 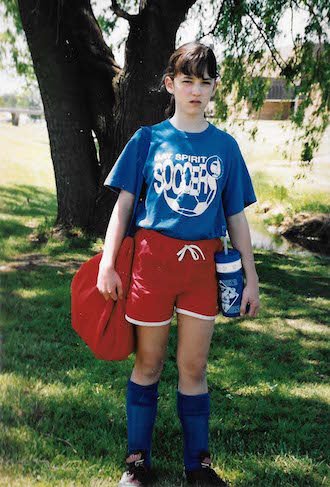 Soccer — and especially indoor soccer — being what it was in the mid-‘90s, Crunch games weren’t televised. They did run commentary on talk radio, interestingly enough, and I’d lay on my parents’ bed and listen to those from time to time, especially during the playoffs, when we’d take on dreaded rivals from other small market cities like Buffalo and Kansas City. My family also went to a number of games, both because my mom got tickets in trade through the small magazine she owned and because my travel team would go as a group to be paraded around the field in our jerseys, reminding fans that, yes, even 13-year-old girls with questionable sporting skills played soccer in the Cleveland suburbs.

Part of my mom’s job also required her to cover charitable benefits in Cleveland, most of which had either an auction or a silent auction. And as the Crunch was apparently an incredibly giving organization and my parents couldn’t turn down four Crunch tickets, a box with food, and my public humiliation for $50, they’d often come home the proud owners of a certificate naming me as the team’s honorary ball girl for an upcoming game. That basically meant I’d spend the hour before the game standing awkwardly in the bowels of the CSU Convocation Center with a member of the team’s media staff. I’d get to meet various players, be forced to wear a massively oversized “Property Of The Cleveland Crunch” t-shirt, and then have to run onto the field during the team’s laser- and smoke-infused introductions with Otto Orf, the hard-assed goalie who, as far as I could tell, didn’t really like kids. I’d then leave the field with the aforementioned media professional, get instructed to return to my parents in the stands, and spend the rest of the game stewing, hating that anyone had been forced to look at me, or that I’d had to carry a ball onto the field through the goal, like some sort of actual athlete deserving of recognition. It was a nice gift, in theory — one that I’m sure my parents thought I’d like, being into the Crunch and all — but as a 12- or 13-year-old girl with a crippling self-confidence problem and an inability to really talk to anyone, well, it probably could have gone better.

[blocktext align=”right”]…so much of my youth was spent playing soccer, thinking about soccer, or watching soccer, my parents pretty much assumed I liked soccer.[/blocktext]Looking back at the heyday of the Crunch now, I take a strange pride in the fact that the team did so well, albeit in such a limited arena. Cleveland embraced the team — at least until it didn’t — and players like Marinaro, Karic, and Orf found a way to make a living doing what they loved in an era when not many soccer players could. (Orf and Marinaro actually still both live and teach soccer in Cleveland.)

Like Cleveland itself, the Crunch succeeded in spite of its detractors, its competitors, and its financial situation, and for a few years made at least one of the city’s sports teams the best in the nation.

Marah Eakin is Associate Editor of The A.V. Club. She lives in Chicago, though she was raised in Bay Village, Ohio.