Panic in Detroit: Benjamin Markovits’ You Don’t Have to Live Like This

Detroit is a city of fist-pumping, all-caps slogans. A hashtag for your Instagram, a bumper sticker for your Ford: NOTHING STOPS DETROIT. DETROIT HUSTLES HARDER. BELIEVE THERE IS GOOD IN DETROIT. The Motor City is a place more beleaguered than most, and its need for affirmation extends beyond the usual I Heart [Insert Hometown Name Here]. The city’s struggling comeback has inspired its native writers in recent years: Mark Binelli’s examination of urban agriculture and creative economy in Detroit City is the Place to Be, Jamaal May’s poems of broken machinery in Hum, and the 60s nostalgia and post-riot tension of Bill Morris’s novel Motor City Burning. As these writers know, Detroit is a city irresistible in its extremes: the scale of its blight, the starkness of its socioeconomic and racial divisions, the controversy of its politics, and the resilience and ingenuity of the Detroiters for whom those underdog aphorisms are coined. You can’t blame London-based writer Benjamin Markovits for taking on Detroit in his new novel, You Don’t Have to Live Like This (Harper Collins). The title alone, spelled in all-caps over a panorama of the city on the book’s cover, has the feel of one of the city’s hashtagable rallying cries — a ring of authenticity.

[blocktext align=”right”]Undaunted, Marny buys a gun at a Walmart and drives to Detroit, the new frontier.[/blocktext]Who’s you, though? What does this mean, and what are the alternatives?

As a teenager George “Marny” Marnier tells his dad he’d like to be “gold-rushing or homesteading or something” — that there must be a “better test” of personhood than his bourgeois life in the suburbs of Baton Rouge. Marny leaves for Yale and then Oxford, where he gets a PhD in early American history. Bored with adjuncting in the UK, he heads home, where fellow Yalie and millionaire Robert James gives him a proposition: move to Detroit, where James has bought up 2,000 empty houses he intends to rehab as an experiment in gentrification. Marny’s mother warns him it’s dangerous: “I’ve been looking things up on the computer,” she says. “Detroit is the number one most violent city in America.” Undaunted, Marny buys a gun at a Walmart and drives to Detroit, the new frontier.

There’s a touch of F. Scott Fitzgerald in You Don’t Have to Live Like This, with old money excess and romance narrated by Marny, who shares their social scene, but not their affluent East Coast background. Robert James employs Marny to profile the colonists and distribute a newsletter. Positioned between James’s moneyed white privilege and a neighborhood of mostly resistant, mostly black Detroiters, Marny gathers the story of a divided community, and the first half of the novel meanders along, with Marny the historian giving the backstory of every character in the novel’s overextended cast: divorcees, naïve artists, angry ex-cops, jaded journalists, and a teacher escaping the scandal of a relationship with a student. Like the early American colonies, Marny tells us, Detroit takes in the refugees and outcasts. 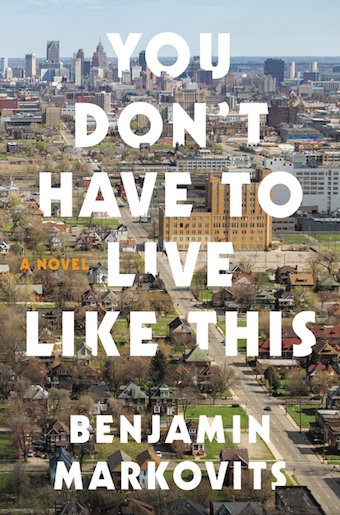 The trouble with Marny is there’s not much to like about him, and for a bachelor emerging from a failed academic career, there doesn’t seem to be much at stake for him. His accounts are neither witty nor lyrical, and the city and its history never feel vividly realized. Further, Marny’s position as a mediator between the Detroiters and the Jamestown elite is complicated by his occasional lapses into misogyny and racism. When a German artist tells Marny she’s been raped by a black man who abducted her outside a Woodward Avenue club, he’s “annoyed” by her, calls her efforts to document the physical effect of her rape in photographs “pretentious,” and thinks about making out with her. Gloria, the black high school teacher who Marny starts dating, is repeatedly infantilized as a “good girl” and othered. When he first eyes her at a party, he tells the reader he, “had never kissed a black girl and wondered if they tasted different.” He tells his brother he has a girlfriend — “a real Detroiter.” When his brother asks what that means, Marny explains, “She’s black.”

Drifting in and out of the novel, Robert James becomes the Gatsby to Marny’s Nick, the mysterious, mansion-dwelling thrower of lavish parties. Jamestown attracts national attention, and at one Thanksgiving-themed soiree, Barack Obama shows up to help shovel the driveway, play a game of basketball, and deliver the novel’s title in a surprisingly deft passage of literary ventriloquism. “The people rebuilding Detroit, and some of you are in this room right now, are still tinkering with it, still adapting to it, still moving forward,” Obama says. “You have come here because there was a voice in your saying, You don’t have to live like this. There’s a better way to live.” Even from Obama, though, the line doesn’t pack much punch.

[blocktext align=”right”]Here’s Detroit. Take it for what you will. You don’t have to eat this coney.[/blocktext]Of course, like the Pilgrims, Marny and the Jamestown colonists have to contend with the people who actually live in this place where they’ve decided to plant their flag. Tensions with the native Detroiters erupt halfway into the book, when a black boy is hurt after stealing an iPhone from someone in Jamestown. There’s a court case, a lot of ugly press, and a race riot that’s offered in a quick two-paragraph summary. Nearly 50 years after Detroit’s riots, and a year since Ferguson, there’s a suggestion that racial unrest and destruction have become a banal part of American life: your neighborhood burns down and you unsentimentally sift through the wreckage for your belongings. The Jamestown experiment is defeated by deep schisms of race and class. The rich, to borrow a phrase from Fitzgerald, smash things up and retreat back into their wealth.

Readers who pick up this book for its depiction of Detroit might also be disappointed. While it might be a relief that the novel veers from waxing poetic about the crumbling sprawl of the Packard Plant, Markovits does little descriptive work in scene-setting, and so Detroit often feels unclear, out of focus. When Marny and James break into Michigan Central Station, Marny gives a swift and unsurprising inventory of its detritus (“graffiti, cigarette butts, and beer bottles”). When Marny has a coney, he explains to the uninitiated reader that it’s a hot dog with chili poured on it, and that it tastes “like it sounds.” The logic here is hard to dispute — a coney tastes like a coney — but another moment when Markovits’s prose flatlines and Detroit feels frustratingly out of reach. You Don’t Have to Live Like This is a novel that gestures toward complicated, ambitious, and urgent matters of American identity and the post-industrial Rust Belt, but offers those matters in the same way it offers the reader a hot dog. Here’s Detroit. Take it for what you will. You don’t have to eat this coney.

Belt Magazine is independently owned; help us continue bringing you quality journalism while paying our writers by backing our Kickstarter campaign.