Activist and philosopher Grace Lee Boggs died October 5, 2015, at the age of 100. A radical advocate for civil rights for more than sixty years, she is the author of the autobiography Living for Change. “Planting Seeds of Hope” was first adapted for YES! Magazine, a national, nonprofit media organization that fuses powerful ideas with practical actions, from the book The Next American Revolution: Sustainable Activism for the Twenty-First Century by Grace Lee Boggs with Scott Kurashige (University of California Press), and was reprinted in A Detroit Anthology (Belt Publishing, 2014).

In 1988, We in Detroit were at one of the great turning points in history. Detroit’s deindustrialization, devastation, and depopulation had turned the city into a wasteland, but it had also created the space and place where there was not only the necessity but also the possibility of creating a city based not on expanding production but on new values of sustainability and community. Instead of investing our hopes in GM, Ford, and Chrysler and becoming increasingly alienated from each other and the Earth, we needed to invest in, work with, and rely on each other.

Through no fault of our own, we had been granted an opportunity to begin a new chapter in the evolution of the human race, a chapter that global warming and corporate globalization had made increasingly necessary. In its dying, Detroit could also be the birthplace of a new kind of city.

In pursuit of this vision, we organized a People’s Festival of community organizations in November 1991, describing it as “a Multi-Generational, Multi-Cultural celebration of Detroiters, putting our hearts, minds, hands and imaginations together to redefine and recreate a city of Community, Compassion, Cooperation, Participation and Enterprise in harmony with the Earth.” A few months later, to engage young people in the movement to create this new kind of city, we founded Detroit Summer and described it as a multicultural, intergenerational youth program/movement to rebuild, redefine, and respirit Detroit from the ground up.

Living at the margins of the postindustrial capitalist order, we in Detroit are faced with a stark choice of how to devote ourselves to struggle.

Through Detroit Summer, urban youth of a lost post-1960s generation, whom many adults had come to shun, fear, and ultimately blame for so many ills, became a part of the solution to Detroit’s problems. Recalling how the Freedom Schools of Mississippi Freedom Summer had engaged children in the civil rights movement, we asked Detroiters to just imagine how much safer and livelier our neighborhoods would be almost overnight if we reorganized education along the lines of Detroit Summer; if instead of trying to keep our children isolated in classrooms for twelve years and more, we engaged them in community-building activities with the same audacity with which the civil rights movement engaged them in desegregation activities forty years ago: planting community gardens, recycling waste, organizing neighborhood arts and health festivals, rehabbing houses, and painting public murals.

By giving our children and young people a better reason to learn than just the individualistic one of getting a job or making more money, by encouraging them to make a difference in their neighborhoods, we would get their cognitive juices flowing.

Learning would come from practice, which has always been the best way to learn. In Detroit Summer we combine physical forms of work with workshops and intergenerational dialogues on how to rebuild Detroit, thus further expanding the minds and imaginations of the young, old, and in-between. Instead of coercing young people to conform to the factory model of education, the time has come, we say, to see their rebellion as a cry for another kind of education that values them as human beings and gives them opportunities to exercise their Soul Power.

Detroit Summer began in 1992 and has been an ongoing and developing program for more than twenty years. Since 2005, it has been organized by a multiracial collective of twenty-something young people, many of whom have been a part of our past summer programs. With this younger generation now at the helm of leadership of the Detroit Summer Collective, the organization continues to tap the creative energies of urban youth.

Some skeptics question whether a program such as Detroit Summer can make much of a difference, given the magnitude of the city’s problems. They doubt that a program, which at its greatest capacity involved sixty youth, could have an appreciable effect in stemming the crises of school dropouts, violence, and incarceration that are stealing lives by the thousands. They ask how tending to a handful of gardens, painting one or two murals a year, and fixing up a house or vacant lot here and there can address the blight that has taken over much of the urban landscape. And they lament that small dialogues — between youth and elders, between neighbors, between people of different backgrounds, and between activists from various cultural and political traditions — cannot match the force of large demonstrations involving tens of thousands. 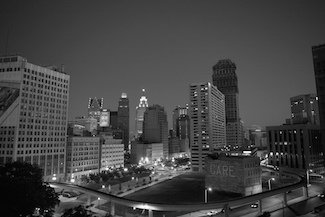 What they don’t understand is that our goal in creating Detroit Summer was to create a new kind of organization. We never intended for it to be a traditional left-wing organization agitating masses of youth to protest and demonstrate. Nor did we intend that it become a large nonprofit corporation of the sort that raises millions of dollars from government, corporations, and foundations to provide employment and services to large populations.

Both of these forms of organizing can be readily found in Detroit and all major cities in the United States, but the system continues to function because neither carries the potential to transform society. By contrast, our hope was that Detroit Summer would bring about a new vision and model of community activism — one that was particularly responsive to the new challenges posed by the conditions of life and struggle in the postindustrial city. We did not feel this could be accomplished if control of our activities was ceded to the dictates of government or the private sector, even though this meant that we would be working on a small scale. However, by working on this scale, we could pay much closer and greater attention to the relationships we were building among ourselves and with communities in Detroit and beyond.

The result has been that we have been able to develop the type of critical connections — of both ideas and people — that are the essential ingredients of building a movement. The best metaphor Detroit Summer has come up with to characterize itself is “planting seeds of hope.”

What has developed through both conscious organizing drives and the actions of many individual residents is a significant urban agricultural movement in Detroit. All over the city there are now thousands of family gardens, more than two hundred community gardens, and dozens of school gardens. All over the city there are garden cluster centers that build relationships between gardeners living in the same area by organizing garden workdays and community meetings where participants share information on resources and how to preserve and market their produce.

[blocktext align=”right”]Should we strain to squeeze the last drops of life out of a failing, deteriorating, and unjust system? Or should we instead devote our creative and collective energies toward envisioning and building a radically different form of living?[/blocktext]When I think of this incredible movement that is already in motion, I feel our connection to women in a village in India who sparked the Chipko movement by hugging the trees to keep them from being cut down by private contractors. I also feel our kinship with the Zapatistas in Chiapas, who announced to the world on January 1, 1994, that their development was going to be grounded in their own culture and not stunted by NAFTA’s free market. And I think about how Detroiters can draw inspiration from these global struggles and how — just as we were in the ages of the CIO unions and the Motown sound — our city can also serve as a beacon of hope.

Living at the margins of the postindustrial capitalist order, we in Detroit are faced with a stark choice of how to devote ourselves to struggle. Should we strain to squeeze the last drops of life out of a failing, deteriorating, and unjust system? Or should we instead devote our creative and collective energies toward envisioning and building a radically different form of living?

That is what revolutions are about. They are about creating a new society in the places and spaces left vacant by the disintegration of the old; about evolving to a higher humanity, not higher buildings; about love of one another and of the earth, not hate; about hope, not despair; about saying YES to life and NO to war; about becoming the change we want to see in the world.

Photo still from the film “American Revolutionary: The Evolution of Grace Lee Boggs.”