Poppin’ The Rag: from Louis Stokes’ The Gentleman From Ohio

The following is an excerpt from The Gentleman from Ohio by Louis Stokes, published by The Ohio State University Press.

When I was twelve years old my paper route took me all through the area around Sixty-Ninth and Cedar in the heart of Cleveland’s black neighborhood, where my younger brother Carl and I lived on the first floor of a rickety old house with our mom, Louise, and our grandmother, Fannie Stone. We were poor as poor, and we knew it. We wore hand-me-down clothes given to us by the wealthy white employers for whom my mom worked as a maid—though she never called herself that. She was, she said, “in service.” Her meager salary, eight dollars a day, wasn’t enough to support us, so she had to go on Aid to Dependent Mothers welfare, too. Carl and I would bring home food supplies, dried beans and peas, sugar, and flour from the Shiloh Church distribution center in our wagon, looking out to defend our- selves from any sudden attack by someone who might think we were easy targets. One of us would be pulling the wagon, the other brandishing a big stick. We weren’t the only ones hungry; by the time I was seven, in 1932, the Depression was in full swing. 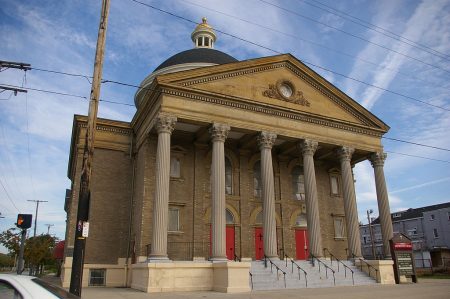 To help bring in money Carl collected bottles and other glass to turn in for cash. I shined shoes, poppin’ that rag as loud as I could, hoping for a big tip, or any tip. In addition, I had the paper route. I got the route from Caldwell Gaffney, a kid a couple of years older than me who lived across the street. Caldwell and his brother George had more or less cornered the market on paper routes in our part of town. They came from an entrepreneurial family—their father had a painting business, one of the few black- owned businesses we were aware of. We used to see him driving off each morning in his white cap and painter’s outfit, sometimes taking Caldwell and George along, wearing their own white caps.

Caldwell hired me to take on part of his route. He and George had bikes. They’d hang two heavy bags of papers from either side of their handle- bars, and off they’d go. Without a bike, I’d lug around my own bag full of papers, the Cleveland News Monday through Saturday and the Plain Dealer on Sundays. Many of the houses in the ten-block area Caldwell assigned me were two-family homes, like ours. I learned to fold the papers into a square and sail them up onto the upstairs porches or into hallways if an outside door was open.

My ten-square-block route was a lot of walking, and I began thinking about what I could do with a bike myself, if only I had one, how much easier it would be. If I had a bike maybe I could even get my own route directly from the newspaper company. I liked Caldwell and George. They were good guys, but with my own route I could make more money to help Mom.

Finally I decided to ask her. A bike cost a lot, about thirty-five dollars, but I’d be able to make that back, and much more besides. As I waited for her to come home from work one day, I sat on the swing on our front porch, going over in my head how I was going to convince her. I’d tell her what a good investment it would be. That was my main talking point—a good investment that would enable me to bring in more money for the family. Obviously a good idea. How could she say no to that? I could already picture myself flying around the neighborhood on my new bike, whizzing those papers up onto the porches. 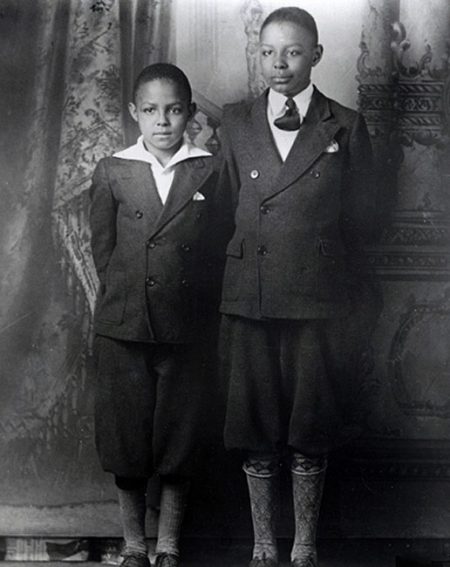 Before long she came toward the house from her streetcar stop, walk- ing slowly after another hard day, but her face lit with a smile when she saw me. As she climbed up the porch steps I jumped off the swing and hugged her. “Can you sit down with me?” I said. “I need to talk about something important.” We sat on the swing together. I explained about the bike, why I needed one, how much more money I could make for us if I had one. It cost a lot, but it would be an excellent investment. She looked at me, hurt in her eyes. “Billy,” she said. My nickname from birth. “Billy, I’m sure it would be an excellent investment, but I can’t afford to buy you a bicycle. We just don’t have the money.” She saw my crestfallen expression. “Maybe after you work a while longer we can figure out a way. Let’s see.”

I was so sure I could convince her, and now my hopes were dashed. I felt worse for her, though. I knew our circumstances. I knew we couldn’t afford it, but I had forced her to say it out loud, to admit to me how poor we were. I felt bad, but I had made her feel worse, after she had come home tired from another long day washing floors, doing laundry, and looking after someone else’s children. But Grandma Fannie saved the day. When she heard about it she took me to her room and got out a little white bag, where she was saving part of her social security money. Untying the strings, she fished out thirty- five dollars. “For your bike,” she said.

So I got my bike, and I got my own paper route. I delivered the papers, but I also read them, the News, the Plain Dealer, the Call and Post, Cleveland’s black newspaper, and the Pittsburgh Courier, the closest thing there was to a national black paper. They had all sorts of stories, about what was happening in Cleveland and all over the country. But the reports I was most drawn to were the ones about lynchings down South, where my mother had come from. 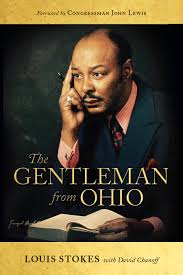 Carl and I had heard stories from her and Grandma. They had both grown up as sharecroppers near the old Oliphant plantation outside Wrens, Georgia. They didn’t talk about it much; they didn’t like to dwell on their past in Wrens. But Carl and I understood that if you were black, bad things could happen to you down there. We had the clear idea that the South was not a place you wanted to be, a place where there were no opportunities, where white people were mean and could do anything they wanted to you. And here in the newspapers were exactly those stories about what could hap- pen to you.

When I was twelve and had started my newspaper reading career, the story of the Scottsboro Boys had flared up again, even though the nine black teenagers had originally been arrested and sentenced in Alabama six years earlier. But the case had gone through appeal after appeal and had become a national fixation. Reading about it mesmerized me. Nine black boys accused of raping two white women while all of them were riding a freight train to Memphis, Tennessee. Almost lynched in Scottsboro, they faced all-white juries and bigoted judges and were, all but one of them who was thirteen, sentenced to the electric chair, the usual fate for blacks accused of raping whites.

But the Communist Party had fastened on the case as an example of American racism and hired lawyers for appeals, which had reached up through the Alabama judicial system all the way to the Supreme Court of the United States. Big constitutional issues were involved, about the exclusion of blacks from juries and the right to a fair trial. At age twelve I’m sure I didn’t understand all the nuances, but the newspaper reports talked of frame-ups and racist police and judges, all of it an eye-opener for me.

Reading about what had happened to the Scottsboro Boys upset me. It made me angry. But I was also struck by the fact that the lawyers who came in to represent the Scottsboro Boys were white—Samuel Leibowitz, a famous defense attorney from New York, and other white lawyers. That seemed to happen in other cases I read about, too. In Detroit Clarence Darrow had defended a black doctor in a famous case where the doctor was accused of murder while he was defending his home against a mob.

My imagination began to work on these things. I thought a lot about what was happening to black people in the South. I didn’t feel threatened by that kind of thing myself—not where I lived, anyway. But I identified with what was going on in the South where black people were subjected to hatred and violence and couldn’t even get fair trials. I imagined myself as a lawyer traveling around from city to city to defend black people who were accused of crimes they didn’t commit. I would represent them in front of white juries and judges and win my cases by the power of my arguments for justice and what was right. I made up my mind then that when I grew up I would become a defense lawyer, like Leibowitz and Darrow, only I would be a black lawyer defending my own people. 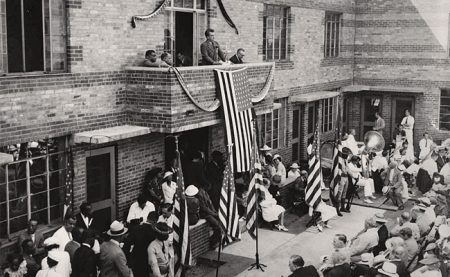 That image lived in my mind; it was my dream. Reality was a different story. You had to go to college to be a lawyer, and I knew I wasn’t going to college. Mom would never have the money to send me. We didn’t even know anybody who went to college. So the fact was that whatever my dreams were, there was no way I was actually going to become a lawyer.

The best that I was going to be able to do was graduate from high school. That was what Mom wanted desperately for me and Carl, that we would earn our high school diplomas. It was her dearest wish. She herself had only gone through eighth grade, which was why she had to make her living the way she did. If she told us once she told us a thousand times, “Get something in your head so you don’t have to work with your hands like I have to.” It was a refrain we both remembered forever, even if we didn’t appreciate the depth of what that meant to her when we were kids.

I guess I thought of it more as just an expression then anything else—“get something in your head”—something any working mom might say to her kids. Until one night when I was about thirteen. Mom was almost never sick, which was why it was so upsetting when she came down with something that put her flat on her back, groaning with pain. I went into her bedroom to see if I could comfort her in some way—we had recently moved from the old house on Sixty-Ninth Street into the newly built Outhwaite Homes Projects. The room was pitch dark. I sat by the bed; it was almost unbearable listening to her, she was in so much pain. I reached across and took her hands in my hands. Her hands were cold—hard, callused hands that had scrubbed people’s floors for years so that Carl and I could get an education and look forward to having something better in life. And it hit me for the first time what she was trying to get across when she kept telling us to get something in our heads so we wouldn’t have to work with our hands, the way she did. Feeling those hard, callused hands in mine, I understood.

image credit: photo of Louis and Carl Stokes and grand opening of Outhwaite Homes from The Cleveland Foundation. Excerpt courtesy of The Ohio State University Press.

Order The Gentleman from Ohio here.