[blocktext align=”left”]Although Chicago is officially smoke free, there’s plenty of evidence of Marie’s smoky past.[/blocktext]I’ve cast my vote at Marie’s in every election since I moved to this neighborhood, and it tickles me that the site of my civic duty regularly sports lettering on their 1950s era marquee sign spelling out: “We have smooth shafts and clean balls.”

Although Chicago is officially smoke free, there’s plenty of evidence of Marie’s smoky past — beneath the rails of each of her 20 Brunswick pool tables are dark burn marks from cigarettes smoked long ago. Fading signs written in pre-Helvetica script hang on the walls with directives like “Masse shots are not allowed,” “rule of the house — keep your butt and your butts off the table” and “I once gave up pool, it was the most terrifying weekend of my life.” 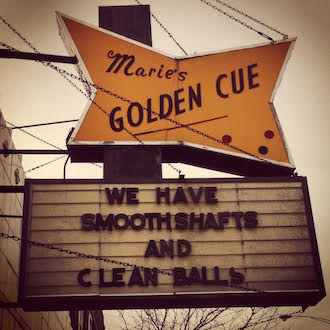 The front desk features a hot dog spit slowly spinning wrinkled franks; it’s the best lit object in the whole place. The spinning mechanism moves in starts, resting every few seconds, and then soldiers on for another cycle.

It’s a great neighborhood joint to spend an evening, and if pool isn’t your game, there are a handful of video games and a coin operated claw machine at the front to keep you busy.

Readers’ Corner is part of an ongoing series – other installments can be found here: https://beltmag.com/tag/readers-corner/