Reflections On A Cleveland Debate

Prior to the start of  last Thursday’s Republican presidential debate, there was a part of me that hoped someone would get hit with a folding chair. Given the free-for-all atmosphere that has started to permeate the field – fostered in large part by Donald Trump, himself no stranger to professional wrestling – this did not seem out of the realm of possibility.

That didn’t happen, but Trump certainly sucked all the air out of Quicken Loans Arena. Even other candidates were willing to admit his appeal. 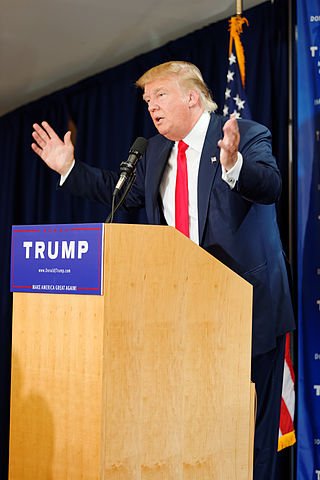 “Donald Trump has hit a nerve in this country,” Ohio Gov. John Kasich said during the debate. “There are people who think he’s touched on an important issue.” Afterward Kasich added, “People don’t believe politicians.”

“I think he’s tapped into an anger that people feel,” former Hewlett-Packard CEO Carly Fiorina said during the “happy hour” debate that preceded the main event. “The political class has failed you.”

Populist rage isn’t exactly a 21st-century creation. The Dust Bowl and the Great Depression begat men like Huey Long. Rising crime, civil unrest, and declining blue-collar opportunities in Philadelphia gave rise to Frank Rizzo in the 1970s. And in the 1980s, after the Youngstown area was decimated by the virtual disappearance of the steel industry, Jim Traficant rose to power (more than a few people in the Mahoning Valley have made the Trump/Traficant comparison – and not just because of the hair).

But Trump – who, let’s face it, is entertaining and banks on that – lays bare the problems of our system of government today. He is the perfect candidate both for voters so desperate for straight talk from a politician that they’ll gravitate to anyone speaking bluntly, even if they’re making outrageous statements, and, occasionally, he stumbles onto some truth, like when he called out donors keen to flood the field with money that permeates politics on a state and national level. He knows they exist – because he is one.

“He buys and sells politicians of all stripes,” Rand Paul said of Trump. And Trump didn’t deny it – in fact, he offered it as proof of how flawed the system is. Not quite the “traitor to his class” Franklin Roosevelt was, but refreshingly honest nonetheless. “I give to everybody,” he said, when asked about supporting political candidates. “When they call, I give. And do you know what? When I need something from them two years later, three years later, I call them, they are there for me. And that’s a broken system.”

It was a breathtaking admission to other candidates, who are used to being sellers, not buyers in the political process. The weekend before the debate, four of the ten Republican candidates at the main event – Jeb Bush, Wisconsin Gov. Scott Walker, Marco Rubio, and Ted Cruz – plus Fiorina went to southern California for a gathering by the Freedom Partners Chamber of Commerce, a group funded in large part by Charles and David Koch. Trump called them on it, Tweeting, “I wish good luck to all of the Republican candidates that traveled to California to beg for money etc. from the Koch brothers. Puppets?” Only Nixon could go to China. Is it possible that only Trump can call out the corrosive influence of money in politics?

It’s not a stretch to say that the two candidates who had the best night at the debate were Trump – who was atop the polls and remains there – and Kasich, who squeaked onto the stage for the main event, 10th in the 10-man field, a little more than two weeks after formally announcing his candidacy.

Kasich and Trump aren’t as different as they might seem at first blush. Both have financial experience tinged with bankruptcy. (Trump, by his own admission, took advantage of the system in place to file for bankruptcy for his companies on four separate occasions; Kasich worked for Lehman Brothers until the company went bankrupt in 2008.) Both offer chip-on-the-shoulder populism (it’s not a coincidence that Kasich swept into office in 2010 when the Tea Party found its teeth). And both know how to play to a crowd – probably better than anyone else on the stage.

[blocktext align=”left”]…there were a lot of people on stage who represented the American Reality: You can do whatever you want – as long as you have enough money, the right pigmentation, and the right parents.[/blocktext]With scads of eponymous buildings and 15 books, Trump is nothing if not a shameless self-promoter, and the media was drawn to him like moths to a flame. Trump drew not just a crowd in the post-debate spin room, but a scrum. One photographer – sent from Trump’s home base in New York City – said, “It’s not this bad in Manhattan.”

But don’t underestimate the media savvy of Kasich, who spent time at Fox News between his time in Congress and his time as governor. Kasich was downright jovial in spin room, saying, “I like the media. I used to be the media. I’ll probably be in the media again.”

The spin room was an invention of Ronald Reagan’s campaign in 1984, and was really the only advantage to being there as credentialed media (we watched the debate on television in a workroom, and weren’t even allowed into the arena). There, you got to see not just Kasich, but his partisans, former U.S. Sen. John E. Sununu (whose father, former Bush chief of staff John N. Sununu, could be spotted doing an interview in the row of satellite trucks along Huron Road) and former U.S. Rep. Dan Burton (who, according to the Washington Post, once fired a gun into a watermelon to demonstrate that Vince Foster was murdered).

Burton, after some prodding from a television reporter, said Kasich was the LeBron James of Ohio politics. And there’s some truth to that – but probably not in the way Burton intended.

LeBron, you’ll recall, made the greatest heel turn in professional sports with his televised “Decision” to go to Miami in 2010. (Kasich, then a candidate for governor, was asked about LeBron’s free agency. He seemed indifferent, which didn’t surprise me. He’s a Pittsburgh native, and the town’s not known for its passionate basketball fans.) But he came back four years later and all was forgiven. Even he realized he’d screwed up.

Kasich swept into office in 2010 by a razor-thin plurality, and almost immediately he and Republicans in the General Assembly passed Senate Bill 5, which severely restricted collective bargaining for public employees. The bill was repealed via referendum in November 2011, and there were no shortage of people willing to write Kasich’s political obituary.

Three years later, he was re-elected governor, bolstering his national appeal, and Republicans won all statewide elections. How did this happen? Well, it didn’t help that the Democrats ran a candidate so bad that the election is called the Wreck of the Edward FitzGerald. (In what appears to be a Pyrrhic victory, FitzGerald can get a lot of credit for the debate and next year’s convention coming to Cleveland. He lobbied hard for it while Cuyahoga County Executive.)

[blocktext align=”right”]The debate was an American Dream-off, with each candidate talking about how they were able to make it despite meager origins.[/blocktext]Also helpful to Kasich was a Libertarian candidate being kept off the ballot. A Libertarian candidate could have spelled doom for Kasich, who avoids pigeonholing through some of his policies, chief among them his Medicaid expansion in Ohio, which was done through the state Controlling Board, bypassing the legislature. Kasich further burned bridges with the Kochs after a fiery appearance in 2013 where he suggested it was his Christian duty to expand Medicaid offerings in Ohio – and he didn’t back off that policy Thursday, although several candidates in the undercard did take shots at him for doing it.

Kasich said the Medicaid expansion has allowed for more treatment of the mentally ill, drug-addicted people, and the working poor. But before he offered those reasons, he said, “President Reagan expanded Medicaid three or four times.”

It was one of only five times Ronald Reagan was mentioned at the debate – a marked change from years past, when candidates fell all over themselves trying to demonstrate how they were the living heir not to Reagan, but to the holy vision of Reagan they themselves have created. This time around, so far, the heir to Reagan is probably Kasich – as demonstrated by the Medicaid expansion.

In a lot of respects, Kasich’s political platform reflects Republican orthodoxy: Tax cuts, pro-school choice, anti-abortion, and anti-Obamacare (he expanded Medicaid, but the state didn’t set up its own exchange), railing against government bureaucracy and looking for more pro-business government. But Kasich challenges conservative orthodoxy with policies like the Medicaid expansion and a severance tax for fracking (which was taken out of the budget by Republicans in the legislature, but he pitched a tax increase, an act of apostasy to many Republicans). And like Reagan, Kasich isn’t averse to gun control. 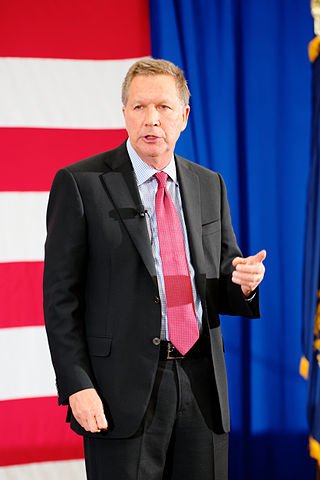 So he’s Reaganesque in that he reflects the policies of Reagan the man, not the demigod who’s been created by Republicans veering into the “No true Scotsman” fallacy when seeking his spiritual heir.

National coverage of Kasich since his announcement of a presidential run has either been of the “He’s a jerk” variety, or the “He’s done some interesting things, has widespread appeal, and can sometimes be a jerk” variety. He likes to speak off the cuff, and it can be dangerous, but sometimes it works, like at the debate when he talked about the journey his family’s taken: “My father was a mailman. His father was a coal miner. My mother’s mother could barely speak English. And their son today stands on this podium in the great state of Ohio not only as governor, but a candidate for president of the United States.”

The debate was an American Dream-off, with each candidate talking about how they were able to make it despite meager origins. Chris Christie’s father worked in an ice cream factory. Rick Santorum’s grandfather was a coal miner. Marco Rubio bragged about growing up paycheck-to-paycheck and carrying more than $100,000 in student loans. These are not achievements. To a lot of people, this is life, and something to be endured.

But for as much as they wanted to talk about the American Dream, there were a lot of people on stage who represented the American Reality: You can do whatever you want – as long as you have enough money, the right pigmentation, and the right parents. Ron Paul’s father was a doctor and a Congressman. Jeb Bush’s father was president. And Donald Trump was born rich and got richer.

In America, you get all the government you can afford. But we can all watch – and maybe be entertained. The debate drew 24 million viewers on Fox News – a record number for a cable program.

Vince Guerrieri has spent pretty much his whole life in the Rust Belt. He was born in Youngstown three weeks before the mills started closing, and left there without really escaping. He’s a Bowling Green State University graduate, spent 15 years in newspapers, and lives with his wife and daughter in suburban Cleveland, where he’s slowly trending toward respectability (and he’s just as surprised by that as you are).