Refugees In Michigan: The Story Of Loss, Belonging And America

(Reporters Nikita Mandhani and Bian Elkhatib traveled to the Detroit metropolitan area on a reporting trip sponsored by the Social Justice News Nexus project at Northwestern University’s Medill School of Journalism. Each Friday this month Belt presents their stories exploring life and challenges for Middle Eastern immigrants and refugees and other diverse residents of Dearborn, Detroit and Hamtramck. The first installment follows.)

Sometimes conflicts and the suffering that they bring force people to leave their homes in search of a place where they can survive. It’s not easy for refugees to leave everything behind: their house, a secure job, a way of life and a family. But they often choose to do that because existence is more important than attachments.

The Middle Eastern refugee experience in the Detroit metro area might be a little easier than in other spots, since there is already a sizeable Arab population and support network.

Over the years, several organizations have made attempts to help refugees gain a sense of inclusion in a new country and society. But still, these refugees always miss home.

[blocktext align=”right”]It’s not easy for refugees to leave everything behind…But they often choose to do that because existence is more important than attachments.[/blocktext]Omar Zadoyan arrived in the U.S. 14 months ago from Iraq. The entire process took about two years, during which his family had to move from their village in Iraq to a city in Turkey to a place in Maryland to his current residence in Sterling Heights, Michigan.

“I left my country because my original country was not safe and all the Iraqi people are suffering,” he said.

More than 1,123 Iraqi refugees came to Michigan in 2015, according to the U.S. Department of State. Sterling Heights in particular has a large Iraqi population, said Madiha Tariq, who works for ACCESS, a social service agency that primarily serves Middle Eastern immigrants.

Iraqi refugees aren’t the only ones moving to Detroit and its suburbs. Since the start of the current conflict, 40 Syrian refugee families have been settled in the Detroit metro area, according to Reem Akkad, who works with the Syrian American Rescue Network, a nonprofit that helps Syrian refugees transition to the U.S. 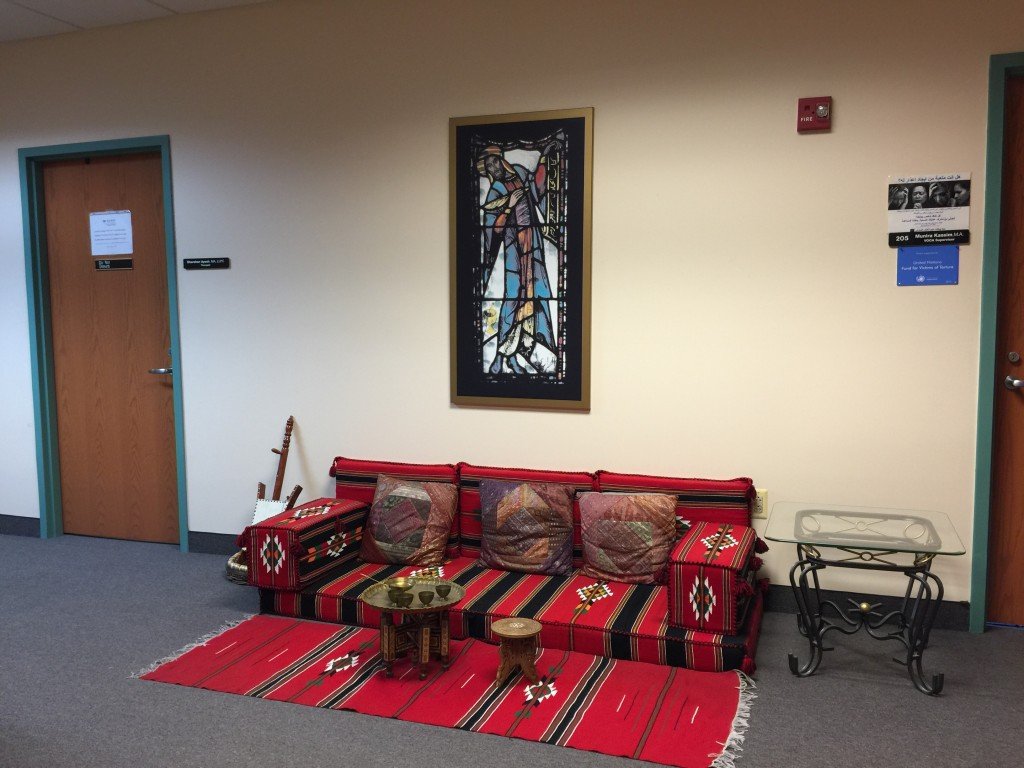 ACCESS — a social service agency that mostly helps Middle Eastern immigrants — tries to help clients feel at home by displaying traditional Middle Eastern items near a waiting room in one of its Dearborn offices. Photo by Bian Elkhatib.

The organization’s support starts immediately after Syrian refugee families land on American soil. “We start with welcoming them at the airport so that they see that people here are supporting them,” Akkad said.

Nagib Kadri, 55, left his home in Lebanon to escape the country’s civil war in the 1980s, and arrived as a refugee in Canada.  He was disappointed to find no one waiting for him at the airport. He had to use sign language to converse with a stranger who helped him call the people that an agency had placed him with.

Several years later, when he moved to Dearborn, he still found life as a refugee lonely and difficult.

He struggled with a new language, culture and country, and worked a low-wage job.

[blocktext align=”right”]“We still live in the past.
We tend to become what we left behind.”[/blocktext]Since that era, several nonprofits, such as ACCESS and the Syrian American Rescue Network, have taken initiative to make refugees’ resettlement process easier.

“Our main goal is to make them self-sustaining,” said Akkad. “We want to get them working as soon as possible.”

Akkad mentioned that the refugees she worked with “have been grateful for the support they’ve received,” and look forward to getting a job after living an aimless life in refugee camps in Jordan and Turkey.

Despite finding a safe haven in the U.S., refugees still grapple with grief over the displacement that separated them from their homes and their past lives.

For Zadoyan, Iraq is still on his mind as he adjusts to Sterling Heights. “I’m feeling sad about the Iraqi people, a lot of them are still suffering,” he said.

Kadri, too, said he thinks about how Lebanon has changed throughout his years in the U.S. and Canada.

“We still live in the past,” said Kadri, describing the emotion of expecting circumstances and people back home to remain the same. “We tend to become what we left behind.”