2015was a watershed year for Chicago. After months of public pressure, a federal judge ordered the city to release dashcam video of a Black teenager being shot sixteen times by a white police officer. That video led to widespread protests, the firing of the police chief, the unseating of the county’s top prosecutor and, eventually, the first murder conviction of an on-duty Chicago police officer in more than fifty years.

The story of that murdered teen, Laquan McDonald, was—and continues to be—one of the biggest local news events in a generation. As an editor in Chicago, I knew what the news cycle would look like after the video was released: months of intense daily coverage of protests, prosecutorial steps and interviews with government officials that would peter into sporadic, formulaic news updates, eventually fading from the public conversation. It felt, in some ways, inevitable—the coverage was valuable in its own way, but was it the best way for journalists to serve the public’s interest?

At its best, journalism is a crucial component of civic engagement, exposing wrongdoing and galvanizing citizens to act for the greater good. Done wrong, it can sow division, lose the trust of the public, and —perhaps worse, for a city infamous for corruption and where mayoral election voter turnout has fallen below 50 percent in the last two decades—engender apathy. So how do we ensure the vitality of journalism in an era of widespread mistrust of institutions?

One month before the release of the Laquan McDonald video, myself and three friends—Darryl Holliday, a reporter, Andrea Hart, an educator, and Harry Backlund, a publisher—had co-founded City Bureau, a local journalism lab. Our guiding idea was simple: in order to make journalism better for democracy, we have to make journalism more democratic.

We cannot continue to think of journalism as a gift bestowed by journalists unto their audience.

Our goal was to tackle the industry’s elitism and lack of diversity—creating an inclusive, community-centered program, where trained journalists of all stripes work with people directly affected by issues like poverty, unaffordable housing, police violence and inadequate education, to produce the news and information useful to them. But more importantly, we sought to show people how journalism can be used, by anyone, as a tool to inform their neighbors, tell stories and make change in their communities.

From the beginning, we knew our work had to have a presence away from the page (or screen) and meet people where they are. So, in addition to training a cohort of reporting fellows to write stories on police misconduct in 2015, City Bureau partnered with the journalistic production group Invisible Institute, hosting a series of workshops around its Citizens Police Data Project, a database that holds hundreds of thousands of complaints filed against Chicago police officers.

For many people attending our workshops, this was their first time seeing firsthand how journalistic tools could provide access to records and help process and analyze the data within. We could ask attendees for the name of an officer in their neighborhood and pull up his or her misconduct record. With a few clicks, we could help them file a Freedom of Information Act (FOIA) request to see the full complaint report. Our reporting fellows could explain the complaint-filing process, including the many pitfalls in the system that make it hard for citizens to navigate. 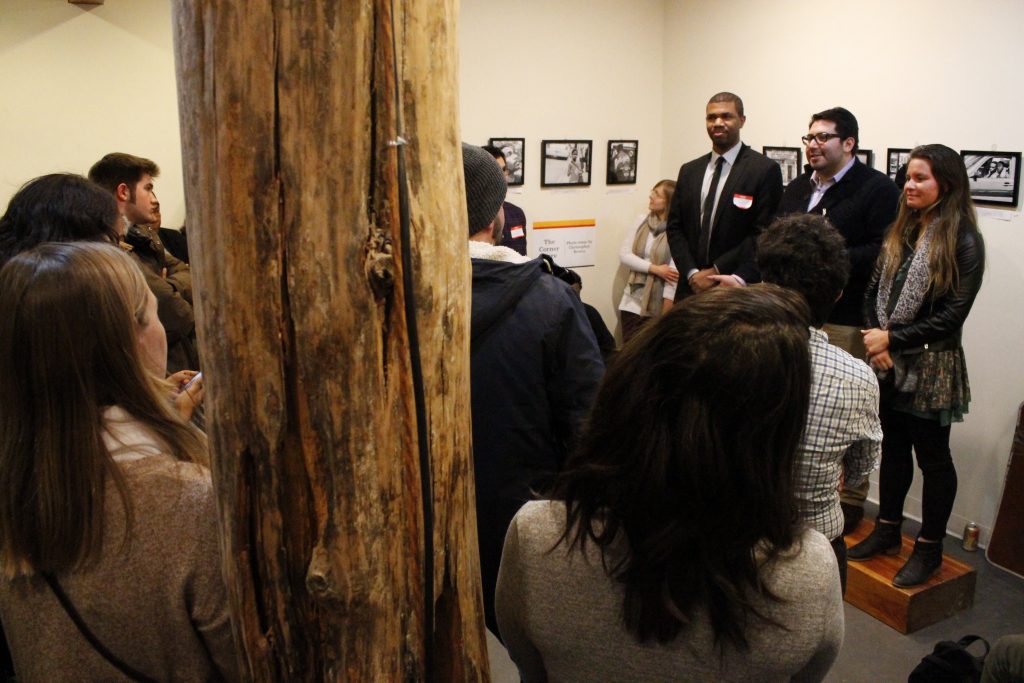 Those early workshops—enabled by the amazing work done by Invisible Institute—were our first foray into the proactive, in-person journalism that we now consider the hallmark of City Bureau’s work. More than just pointing out injustices in the system, this process equipped people to overcome them. Yes, it was more time- and labor-intensive than simply publishing a story on the database and the information available in it, but now our audience had a set of concrete skills that they could take home and share with their communities.

The following year, buoyed by the success of our citizen training, we developed the Documenters program. This program had its origins in the Smart Chicago Collaborative, a civic tech group, and City Bureau took it on with an eye toward making the dense, complex reports issued by Chicago’s police accountability task force more digestible to the average person. The idea was simple: Teach a person the nuts and bolts of journalistic work, then give them a reason to use those skills. The more people you can teach, the more efficiently you can complete the work, the faster people have access to high-quality information.

That summer, we trained and paid ten people to parse the two-hundred-page police reform report and, using the same technology that drives the popular rap lyric site RapGenius, annotate the report with contextual notes, news articles and research. The resulting Police Task Force Tracker was used to engage students from across the city in classrooms, referenced by the head of the Police Board, and passed between elected officials. We even hosted a few workshops with high school students where we taught them how to use the tracker and add their own annotations based on their experiences with police officers. To date, we’ve created five total trackers related to Chicago’s police reform efforts.

Since 2016, the Documenters program has grown to focus mostly on documenting public governance meetings. Our Documenters record, live-tweet, and take notes at meetings throughout the city that would otherwise go uncovered by local media, to keep tabs on public officials and create a third-party record of what happened there. We’ve built a sort of journalism street team—an army of citizens ready to be mobilized to process spreadsheets, file FOIAs, and record meetings.

More recently, City Bureau has sought to fully embody our “reporting in the open” philosophy by opening our newsroom to the public. This meant creating a space where folks could learn new skills, meet interesting people, and discuss and critique civic media work. Most Thursday evenings, you can find us at Build Coffee, a cozy cafe in our building. We’ve invited everyone from artists to coders to activists to journalists to share their stories or workshop ideas. Rather than just reading about someone who’s doing something interesting, attendees can engage directly with their ideas and ask their own questions.

We’re not alone in this movement. Our first journalism partners, the Invisible Institute, have embodied this philosophy by uplifting the voices of & delivering tools to communities most affected by police misconduct. Free Press, based in New Jersey, has pioneered programs that treat people as constituents, not consumers. And there are practitioners in other news outlets and community organizations throughout the country, and beyond. In fact, likeminded groups gathered in Chicago this month [ed note: November] for the People-Powered Publishing Conference, to discuss new ways to make journalism more accessible to all.

Journalism is an act of citizenship—something we co-create, which binds society together.

We’re in an era characterized by the steepest drops in public trust of American institutions on record. In industries like journalism (and government, and police, and corporate boards, and academia), powerful people simply don’t understand the life experiences of the communities they purport to serve, and many even deny the harm they have wrought upon vulnerable groups. In the case of Laquan McDonald, some activists placed the blame squarely on these very institutions: police for committing violence against people of color, politicians who protected them from punishment, and journalists who turned a blind eye to it all.

But it was more than just blindness, or even willful ignorance. It’s a structural defect. The traditional model of journalism hoards the power—and responsibility—for uncovering and publicizing wrongdoing in the hands of very few people. At City Bureau, we’ve learned the wisdom of sharing that power with as many people as possible. Why not equip more community members to dig up information about their local governments, police departments, school boards, and the like? Why not show people how to vet the information and share it with each other while building their own avenues of civic power?

We’ve learned a lot since our first open house. We know that most people don’t show up at a journalism event brimming with scoops—but they do want to participate in thoughtful discussion that often leads to new pathways of reporting. They may not trust “the media” as an institution, but they can and will trust reporters who want to build relationships with them. Most importantly, we found that there are plenty of people who want to engage in civic processes in the city, but simply don’t know where to start.

We cannot continue to think of journalism as a gift bestowed by journalists unto their audience. Rather, journalism is an act of citizenship—something we co-create, which binds society together and allows us all to make better decisions. The problems facing communities across the region are not new, and neither are the solutions. We are simply reframing the question and asking more people for the answers. ■

Support for this article was provided by Rise Local, a project of New America.

Bettina Chang is the cofounder and editorial director at City Bureau, a civic journalism lab in Chicago. She previously edited at Chicago magazine, DNAinfo Chicago and Pacific Standard magazine. She is bad at growing tomatoes and good at petting dogs.