On a humid Thursday night, Clevelanders packed into The Happy Dog, a bar and hot dog joint on the east side of city. They ordered beers and searched for stools. Those who couldn’t find seats stood shoulder-to-shoulder for an event that lasted almost two hours: a panel discussion about the history of the nearby Hough neighborhood.

From July 18 to July 23, 1966, Hough, a predominantly African-American neighborhood, was in crisis. Fires blazed through abandoned buildings and the glass of smashed windows scattered on the sidewalks. “Frightened police, attempting to avoid injury to innocent persons, were virtually helpless during the rioting,” The Cleveland Call and Post, an African-American newspaper, reported. Governor James Rhodes brought in the Ohio National Guard. They were stationed on the streets. Street lights were shot out. “Snipers endangered the lives of policemen and citizens, and firemen who attempted to lay hoses to fight the fires,” The Call and Post read.  At the end of the tense six days, four Hough residents had been killed, hundreds were injured, and the neighborhood was in ruins.

While those six days are commonly remembered as the “Hough Riots,” others refer to them as an “uprising.”

But those six days are only part of the story. 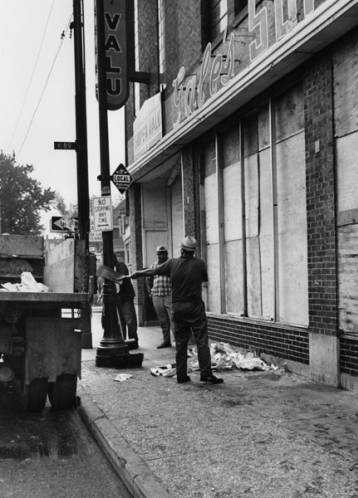 The violence in Hough was just one instance in a wave of similar events through the country. In April of that year, the U.S. Civil Rights Commission came to Cleveland as part of a national investigation. High schoolers testified about segregation and violence targeted at African-American students in Cleveland’s public schools. Residents of Hough gave testimony on unsanitary living conditions in dilapidated apartments with absentee landlords. The African-American residents of Hough were frustrated with what was described by The Call and Post as the “decaying” state of the neighborhood, with abandoned buildings that “stood in mute testimony to the delay of urban renewal.”

After buildings were looted and destroyed, many businesses did not reopen. Despite some efforts at redevelopment in the 1980s and ‘90s, Hough is still described as a “gritty” area by local papers. The neighborhood hasn’t been able to shake off the perceptions that people formed of it in the ‘60s. But the panel discussion at the Happy Dog did its best to change that.

The panel, entitled “Hough: Before and Beyond ‘66” was hosted by WCPN as part of their coverage commemorating the Hough Riots. The panelists included Carolyn Watts Allen, former safety director for the city of Cleveland, who helped spearhead Hough’s redevelopment in the 1990s; James Hardiman, a civil rights attorney who grew up in Hough; and William Tell, a retired Cleveland Police Department captain who built a home in Hough in the 1980s. As they shared their memories of living in the neighborhood, their accounts were punctuated by native Clevelanders calling out “that’s right.” The crowd spent their Thursday evening at the Happy Dog because they wanted to remember what was, for some, their own history. Others were there to learn.

The riots started on July 18, 1966. On July 18, 2016, fifty years later, the Republican National Convention will be called to order in Cleveland. 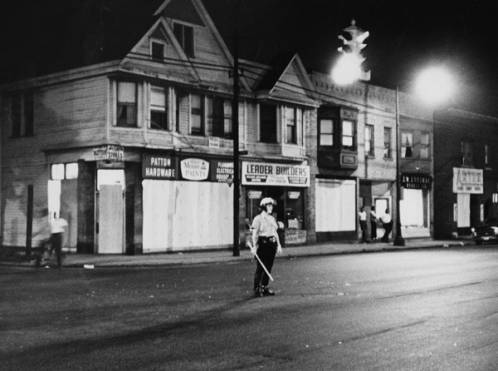 The memory of the Hough riots might get lost in the chaos of the RNC next week, but Clevelanders are doing their part to make their history heard. After originally being denied a permit, a march commemorating the 50th anniversary of the Hough Riots is planned for next Monday.

So often, history is celebratory. Triumphs are honored and defeats are carefully forgotten. But shameful, tragic history needs to be remembered. It is that kind of history that challenges assumptions and fosters change. 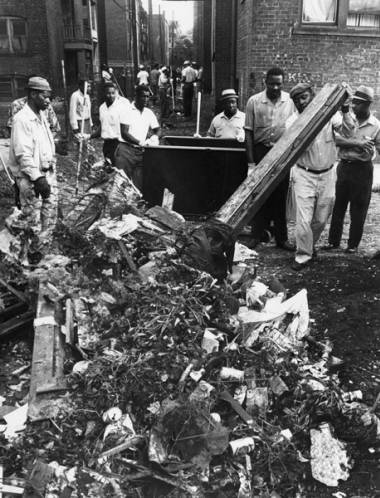 “No, it wasn’t good,” Larry Rivers, who was 15 years old and living in Hough at the time, recalled in an oral history recorded by the Center for Public History and Digital Humanities at Cleveland State University. He witnessed the destruction of his own neighborhood but he allowed that some good came from it—“you had to tear down something to get something built back up.”

When the RNC comes to Cleveland next week, perhaps some of the delegates will venture to the historic sites in northeast Ohio. The GOP created a map of ten historic sites and monuments that celebrate the history of their party in Ohio. However, they are all laudatory: the James A. Garfield National Historic Site in Mentor, the McKinley Monument in Canton, a statue of Abraham Lincoln in downtown Cleveland. Clevelanders embrace their own difficult histories—the delegates to the RNC should too.

News outlets covering the RNC will likely draw parallels between protesters and the uprisings in Hough fifty years ago. Like the crowd at the Happy Dog, they may look to 1966 for solutions to problems in 2016.

While communities across the country search for answers to widespread violence and systematic racism, Americans should continue learning about the history that is provoking and unsettling, the history that angers and saddens and shames. But a precedent won’t be found in the past. We need to set our own precedent.