Sitting Ducks: The Mystery of the Cleveland “Duck Factory”

Rubber ducks, that is.

Sandwiched between the University Circle Inc. Police Department and a road of residential homes in Cleveland’s Little Italy neighborhood, the mysterious property slowly decays. Of course, vacant buildings are nothing new to Cleveland, but this one stands out from the countless other homes, businesses, and empty storefronts that lurk in the city.

This particular building, coated in graffiti, shows the radical decline of a historic location after decades of use. And, in almost every different room, there are ducks. The small yellow birds litter the building. They are placed on ledges and arranged in rows; scattered on floors and thrown into cubbies; peeking out of closets and sitting on old, bowed staircases. Local adventurers and rummagers mistake the building for a former rubber duck factory, thanks to the sheer number of the toys. 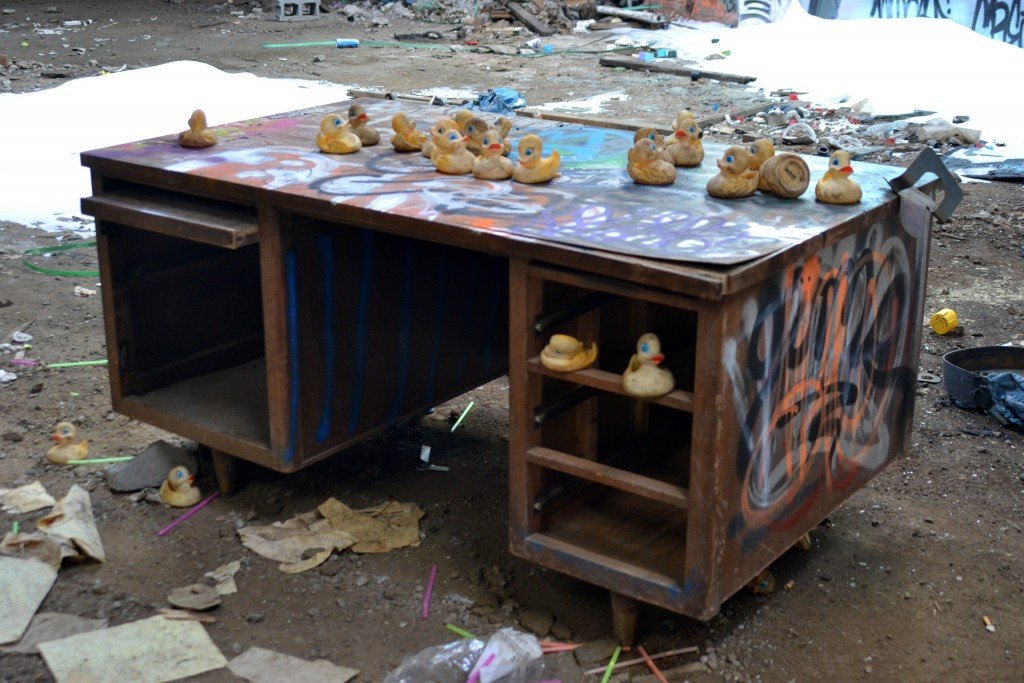 A photo posted on Reddit more than eight months ago shows a wrecked room in the building in which more than 100 rubber ducks are visible, scattered across the tipped-over furniture and the floor. “This reminds me of the teddy bear factory in ‘Fallout 3’,” writes one commenter. “Well that’s creepy” and “Ernie was fuckin lied to” remark others. With more than 35,000 views, the photo has captured the attention of both Clevelanders and abandoned architecture fanatics alike.

Even now, less than a year after the photo was taken, the room has changed drastically due to continuous destruction and decay. Almost all the wooden furniture has fallen into deep rectangular recesses in the floor. In one room a worn leather chair remains in the middle of one of the long platforms. Seated on the chair is a single royal-looking rubber duck, looking out over the chaos that surrounds it.

There is no doubt that people have been bringing their own things into the building; a recent walk through various rooms unearthed baseball caps, empty cottage cheese containers, and soda cans. Mainly, though, it seems that visitors have been more intent on trashing what was already there. The building has only been vacant for four years, but its problems started long before it was abandoned, and have simply accelerated in its few years of neglect.

[blocktext align=”right”]Ducks in a plumbing supply location? Seems fitting.[/blocktext]Before falling into disrepair, the building was for 50-some years the distribution complex for Woodhill Supply, Inc., a plumbing, HVAC, tool and PVF company.

Woodhill president Arnold Kauffman had to move the complex because, as he says, “The maintenance on that building had been excessive.” In addition, he says, the tight streets of Cleveland’s Little Italy neighborhood were tough for Woodhill’s long trucks to navigate. When the roof began to slowly cave in, the location’s problems became too much to keep up with. Woodhill moved in 2011.

In the early part of the 20th century the building was used for streetcar maintenance, says Kauffman, which explains the rectangular recesses in the floor of its Reddit-famous room. These basement locations were used by maintenance staff to fix old Cleveland streetcars from beneath. As streetcars were eradicated from Cleveland’s public transportation system in the 1950s, the building’s usage evolved, eventually being bought by Woodhill in the early 1960s. 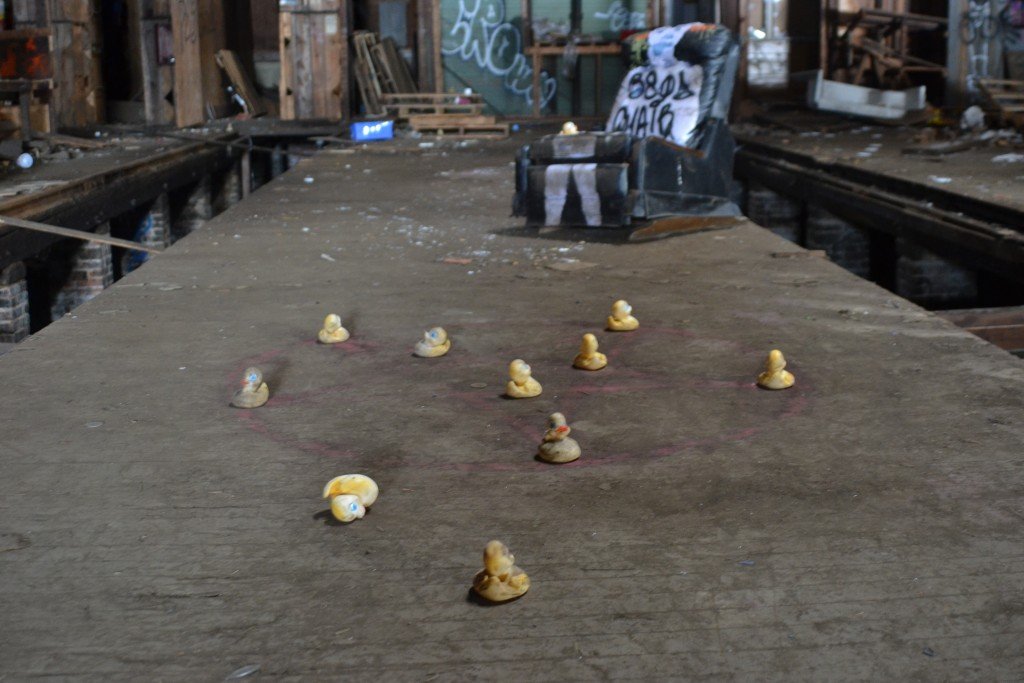 The flooring in the streetcar repair room was a problem for Woodhill as well. The business had to lay several metal sheets over dangerous drop-offs, and today the rusted metal curls like a snarling lip over the floor. Nearby, ducks look on.

But though the ducks seem to dominate the building now, they play only a small part in Woodhill’s history. Around 15-20 years ago, says Kauffmann, a local charity approached Woodhill and asked to use some of the complex as storage for the toys. Every year, the charity would race the ducks down the Cuyahoga River, with the winning duck (or rather, the person betting on it) receiving a prize.

The actual origin of the ducks remains a mystery. While Kauffman was fairly certain that the ducks were from the local Red Cross chapter, there are no records of such an event occurring in the past 15-20 years: no files, no memorabilia, not even photos in a scrapbook.

“We had space, and I said sure,” says Kauffman. “[The ducks] were there for many years, just sitting on the shelf.”

But now, plans are underway to tear down the century-old duck house, and replace it with over 200 luxury apartments. “It’s a shame that a building with that kind of history has to be destroyed,” says Kauffman. “I’m anxious to see what they do with the site.” But, he adds, “It’s progress.”

Though the apartment plans haven’t been nailed down as of yet, the construction project has been unanimously approved, according to a November Plain Dealer article and the developer, Visconsi Companies, Ltd., plan to move forward in the spring of 2015. Currently, Visconsi is still in the entitlement process. 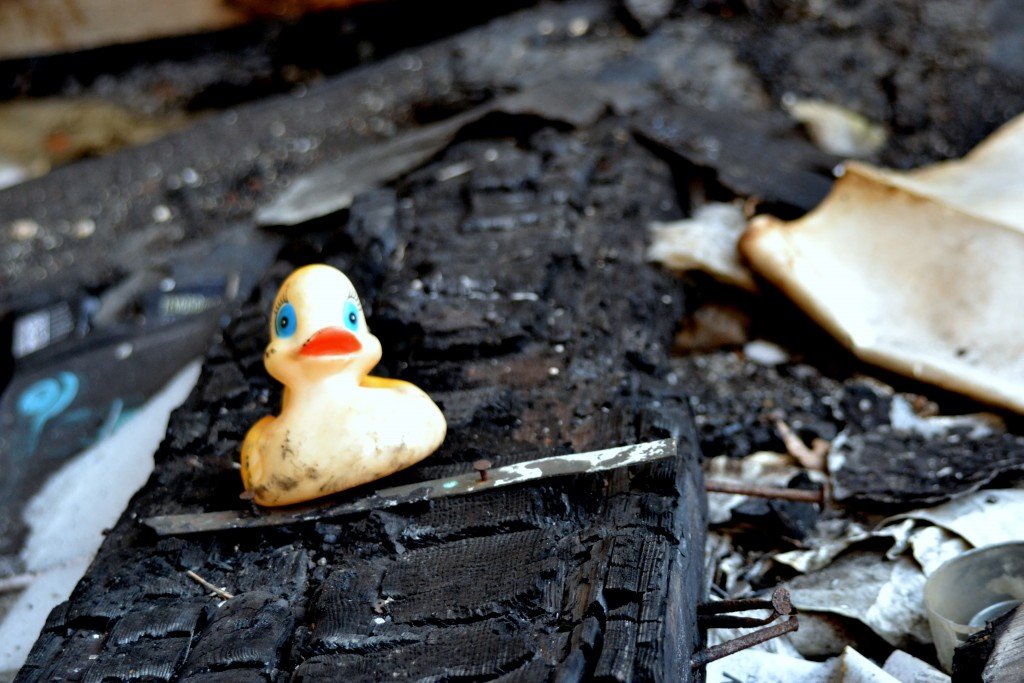 Even Barry Fader, Visconsi’s Senior Vice President, wonders about the ducks that have been left in the building. “They’re everywhere in there,” he said. He had heard comments that the ducks were from a local charity race as well, but couldn’t pin down exactly which one.

As Cleveland moves to redevelop neighborhoods like Little Italy, the vacant building continues to fall apart day by day. New graffiti pops up on the walls. Footprints lead into the open doorways, of adventurers hoping to explore the space before it’s gone.

And the ducks? They remain in silence, sitting, watching and waiting for their eventual demise.

Anne Nickoloff is a student at Case Western Reserve University and is the editor-in-chief of The Athenian, Case Western’s humor magazine and has had articles published in Cleveland Scene Magazine, Cosmopolitan Magazine, The Observer and Cleveland Street Chronicle. In her free time, Anne enjoys skiing, knitting, and exploring Cleveland.