As it turns out, even after a lifetime of stupid questions, there are still more to be asked.

I learned this on day two of the Republican National Convention, when I went around asking one: “How do you define the American Dream?”

It’s a stupid question because it’s so overblown, and so prone to elicit empty slogans (such as “Make America Great Again”), and so hard to answer on the spot.

And yet, in these times, and especially in the time and place I found myself Tuesday, the question was unavoidable.

After an opening day in the thick of downtown Cleveland’s convention activity, which encompassed both anticlimax and sensory overload, I spent Tuesday in the little West Side neighborhood known as Hingetown, where the Transformer Station art gallery was hosting a live sculpture event called “The American Dream Project.”

The Brooklyn-based duo of Nora Ligorano and Marshall Reese, aided by a local company called Elegant Ice Creations, assembled and unveiled a large, fairly straightforward ice sculpture that spelled out THE AMERICAN DREAM, and then proceeded to melt.

The intention was obvious: What do those words mean, and is their notion eroding? So I started asking. The first person to answer just became an American citizen on Friday. 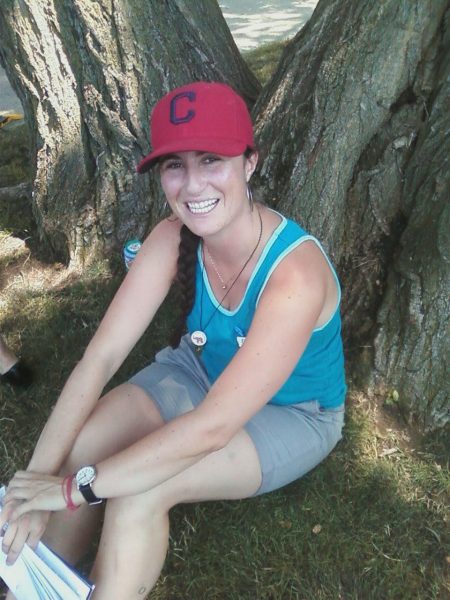 Four days later she was here, working as a volunteer for the event. Her name is Francisca Ugalde, a native of Chile who now lives with her parents in Hudson. She has lived in America for 17 years, so her idea of the “dream” is well formed. As an artist who is the daughter of an engineer father, she’s aware of a disparity between her economic opportunities and his. She teaches part time in the art department at the University of Akron.

But on Friday, after asking seven basic questions about American history and declaring for the record, “I speak English,” she found a new meaning.

“Becoming a citizen means being able to take one step up. It’s huge,” she said.

One of the things I like about Cleveland is its benign inconsistency. The neighborhoods are kind of crazy-quilt, often with incongruous gaps in between.

Hingetown, an odd block in the Ohio City neighborhood, is almost like a cartoonist’s sketch of a hipster oasis, with a boutique bicycle shop, a tea shop, a juice bar, and a coffee shop that everyone insists you try. (Rising Star. It’s good.) When you pull back to the larger landscape, you see not only its tight boundaries, but also how it layers into the stark industrial sweep of the Cargill salt mine, which then layers into the natural beauty of Lake Erie.

This pattern continues across the city. What happened in Hingetown on Tuesday – the “Day of Art and Politics” included panel discussions, the screening of short documentaries about real lives of Clevelanders, and an interactive “Truth Booth” – was useful, and interesting, and thought-provoking. But it also felt self-contained.

One of the attractions of Cleveland to the planners of the convention is that its downtown is compact. The attendees don’t need to leave the immediate area. The downside is that this is keeping our national Republican power brokers from interacting with neighborhoods and therefore away from a valuable conversation.

The same could be said of the Hingetown event, which was attended by the types of people you would expect to find at a conceptual art unveiling.

Both are preaching to their own choir.

One of Tuesday’s panelists, filmmaker Kate Sopko, shared a quote from the poet Lamont Steptoe: “It’s the turbulence that keeps the waters clean.”

But since the choir at the Q is getting plenty of attention this week, I asked my stupid question of the Hingetown contingent.

How do they define the American Dream? 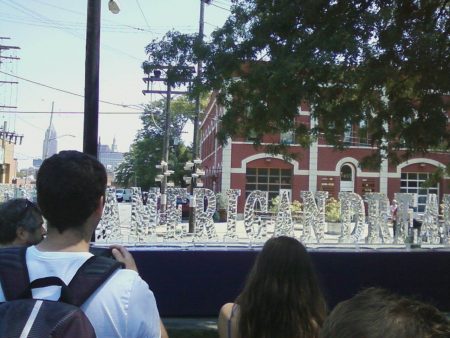 Laura Bidwell, artist and co-owner of the Transformer Station: “Equal access to all things for all people.”

American Dream Project co-creator Marshall Reese: “I think the American Dream is a suspect idea, and I think it’s timely to reconsider what it means.”

Fred Bidwell, co-owner of the Transformer Station: “I’ve never believed in the American dream. I think that’s a fantasy, a delusion. I don’t think nations have dreams; I think that’s individual. It’s a bogus idea that leads us in bad directions.”

RA Washington, writer/bookstore owner/activist: “I think the American dream is defined by having access to safety, home, and culture, and if you have all three of those things, you have it.I think I have it. But I don’t think I’ll be satisfied till everyone has it.”

By midafternoon, the sculpture was beginning to lose its sharp edges, the ice letters slowly deforming, returning to liquid that trickled out through a series of clear hoses attached to the sculpture’s platform.

The interpretations I heard this day of the “dream” were also accompanied by interpretations of the sculpture itself, some seeing an actual meltdown, others seeing the transformation of a basic element from frozen to fluid.

The American Dream team will recreate the sculpture next week at the Democratic convention, where the question will continue and the answers will too.