Ayana Contreras on the creative legacy of the Chicago street


Creativity is a holy thing in Black Chicago. Creativity and belief in the impossible. And creativity is astounding, powerfully churning, just beneath the surface of everything around us, waiting for a fissure (or a faithful messenger) to aid in its escape. And it is the story of that unique creative energy, which renews itself as it transfers from generation to generation, that quickens my pulse.

I find evidence of this in stoic buildings, and I find evidence in vinyl records: testaments to dreams and beliefs. In identity, in possibility, in power (despite oppression). The buildings root the story in a very concrete place. The records lend to the story a sensation of humanity, of heart and of soul.

So where does the story begin?

At 79th Street and Stony Island Avenue? The cantilevered Chicago Sky-way rises above, casting a noirish shadow over a bustling six-point intersection. A whitewashed, abandoned Leon’s BBQ is to my right. Not even twenty years ago, Leon Finney Sr. would shuttle between his kingdom of barbecue shacks in his beige Rolls-Royce (license plate “LEON RIB”).

Near the northwest corner of the intersection, a nondescript white-washed storefront once housed Clarence Ludd’s High Chaparral club, one of the most popular clubs of the 1970s. The High Chaparral hosted the who’s who of local and national talent from Tyrone Davis to B.B. King. Those days are long gone. 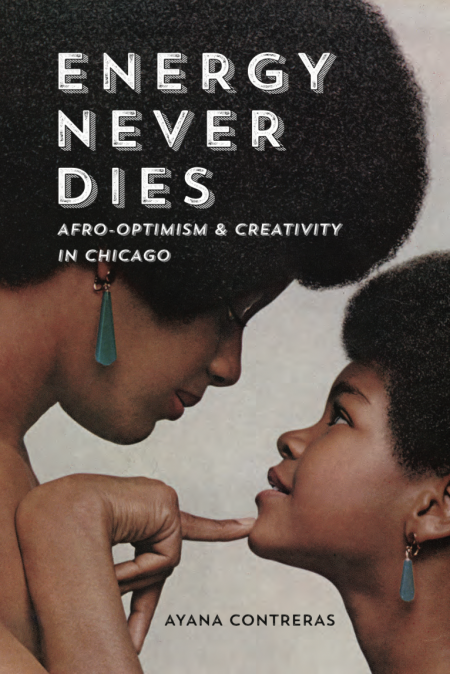 The New Regal Theater sits to my left. The blonde-bricked theater glitters with multicolored faux-Moorish ceramic tiles. According to lore, the architect, John Eberson, was inspired by an ornate Persian incense burner he found in New Orleans. In the 1980s, the theater, originally known as the Avalon, was purchased by Ed and Bettianne Gardner (who had made a fortune in the Black hair-care business with their Soft Sheen products).

Ed and Bettianne’s objective was to create a space for Black creativity to flourish. In a 1987 article, Ed stated, “We feel the black community has got an instrument that can really continue to make life better, that’s the purpose of this theater to bring entertainment, bring quality of life up, and encourage our youngsters.”

The Avalon was renamed in 1987 to reclaim the splendor of the original Regal Theater, which stood some miles away in Bronzeville before its 1968 closure. The axis of the Black South Side of Chicago had shifted farther south beginning in the late 1950s, and this was jeweled proof of the shift. Who knew that that shift would also mark a peak of sorts? The beginning of a molasses-slow decline?

Despite a marked decline around it, the New Regal is still standing at 79th and Stony. Just north of what was Curtis Mayfield’s Curtom Records. Just east of the massive old Sears and Roebuck building, vacated after ninety years in the neighborhood. Just south of Mosque Maryam, where Louis Farrakhan speaks on Sundays to the faithful of the Nation of Islam. In fact, the bow-tied Muslim men in suits selling bean pies are as much of a landmark at the intersection of 79th and Stony as is the New Regal.

Perhaps a victim of repeated turnover in ownership, the New Regal Theater has never truly lived up to its namesake in terms of relevance in the community. A lovely jeweled white elephant of a music box. Silent. Dormant. Yet it is a metaphor for the struggle of Black Chicago. A struggle often articulated by young Black creatives. Faithful messengers. It’s a struggle rooted in the belief and faith in our collective resurrection.

And, it is no coincidence that just north of the mosque on Stony Island rises Theaster Gates’s Stony Island Arts Bank. This is a contemporary art gallery, event space, community center, and archive. Gates has called it “redemptive architecture.” The 1923 cloud-white bank building, girded by tall classical columns, had been abandoned since the 1980s. Theaster noted in a 2015 interview that “projects like this require belief more than they require funding.”3 It is by no coincidence that one of the Arts Bank’s permanent collections is the record collection of Frankie Knuckles. Even before his premature death, Frankie had obtained mythical status for his contributions as a DJ and producer during the golden age of house music in Chicago (beginning about in the early 1980s). It’s a body of materials that carries immeasurable weight in the community, and suspends disbelief in the power of culture to change the world.

Black Chicago is populated not just by people, but also by physical objects that are testaments to periods of forward momentum. Objects and places that are still imbued with the power to inspire and to instill a swell of pride.

But as these objects inevitably break down, what remains to tell the story transcribed on liner notes and found photographs? And what becomes of the pride and possibility that trickled down from the Soft Sheen mansion to the Henry Horner Homes?

Thinking about what we choose to save and what we throw away intrigues me. What will become of ephemeral objects that never make the digital leap from paper to pixel or from groove to gigabyte? What bits of knowledge live on these physical artifacts, beyond their native media? And what happens when these formats degrade? Much of the corporal proof of our creative capital is in the midst of a breakdown. But the spirit remains. Jawole Willa Jo Zollar stated to an audience in 2014 that she admired Chicago’s Black arts community, in particular our spirit of “Black radical imagination.” Her eyes glimmered with palpable energy. Zollar, founder of the dance troupe Urban Bush Women, was in Chicago that spring as part of an artists’ residency with Columbia College Chicago’s Dance Department.

Months later, I recounted her statement to lifelong Chicagoan and free jazz saxophonist David Boykin over a vegan meal at a Hyde Park restaurant. We wondered aloud what she had meant. What was this uniquely Chicago thing?

I sighed as two middle-aged Black men slipped out of the booth beside us, one holding a dog-eared paperback copy of The Destruction of Black Civilization by Chancellor Williams. The book has been in print through Chicago’s Third World Press since 1974. It holds a prominent place on bookshelves across Black Chicago and has served as a sort of Black nationalist–thought gateway drug for younger generations here.

The Third World Press describes the book as “intended to be a general rebellion against the subtle message from even the most ‘liberal’ white authors (and their Negro disciples): ‘You belong to a race of nobodies. You have no worthwhile history to point to with pride.’”

Yes. That is the unspoken Chicago thing. A mind state tied to a place where improbably huge stories happen, bound by segregation. The thing that allows for an amazingly rich legacy of strong Black business and creativity. The basinet for free jazz, modern gospel, and the electrified blues. Later for a striding, larger-than-life brand of soul, and even house music. That Chicago thing produced literary behemoths like Lorraine Hansberry, Gwendolyn Brooks, and Richard Wright, and is still producing fruit like Eve Ewing and Nate Marshall. Ebony, Jet, the Chicago Defender, and Third World Press put the good news, the Black radical gospel, in print. Generations of visual artists like Nick Cave, Kerry James Marshall, and Richard Hunt continue to push boundaries.

And today, a new breed of artists, academics, and cultural workers is working to fashion arts creation hubs that dually build upon an arts-based economic model and an ethos of creative reuse.

One thread is a loosely bound constellation of projects sort of orbiting around the work of Theaster Gates; but it is real, and in the present day, and has inspired a small-scale Black artists migration to Chicago.

Though a variety of jobs and physical goods have been born out of these projects, in my opinion, the chief product is an overarching swell of pride felt in spaces that had once been forlorn. Pride tied to the improbable coming to pass in a community that stands to gain the most.

Theaster once noted to me that it was Chicago that allowed his art practice to achieve the scope that it has. The space is here. “In space there is opportunity,” he shared. In space, there is the ultimate raw material.

But comparing him to titans of industry like George and Joan Johnson would be in error. His goal has never been to build long-term businesses; rather, his model revolves around extended pop-up enterprises that showcase what could be. He is an artist, first and foremost, who works under the hypothesis that we have more underutilized capital (creative and physical) in Black Chicago than even we sometimes realize. This space exists in concentrations because much of Chicago is hemmed in by segregation. Yet, within occasionally painful constraints, amazingly free transformative ideas have transpired.

In a place so bereft of large-scale development, Theaster’s high-profile projects can appear as hollow baubles: beautifully crafted spaces that don’t seem to address the trauma in surrounding neighborhoods. But that critique assumes that spaces for art, spaces that celebrate culture, aren’t as important to the health of a community as a place to get clothes dry-cleaned. The hierarchy of needs comes into play, but certainly the arts have a role in overall quality of life, a truth played out by other creative reuse–based projects like Rick Lowe’s Project Row Houses in Houston, or even St. Elmo Village in Los Angeles, a grouping of buildings that were originally silent film star Mary Pickford’s horse stables. The complex was converted in 1969 by artists Roderick and Rozzell Sykes into an arts space for creatives of all ages.

One episode of the TV program Black Omnibus, hosted by James Earl Jones and shot in Los Angeles in 1972, featured Rozzell Sykes and the children of St. Elmo Village as well as Paul Mooney and the Bar-Kays (outfitted in baby blue and in town for Wattstax). Sykes explained to Jones, that since the building of the complex, in the surrounding community, “There has been a harvest of awakening. The streets of St. Elmo that used to be drab and brown are now green.”

But back to the term “Black radical imagination,” a phrase as mysterious and obtuse as the cosmos. What exactly is this thing? The phrase is credited to Robin D. G. Kelley from his 2002 Freedom Dreams: The Black Radical Imagination. In many ways, imagination is the ability to push past the concrete and into the realm of the marvelous. In the book, Kelley further defines the marvelous:

My mother taught us that the Marvelous was free—in the patterns of a stray bird feather, in a Hudson River sunset, in the view from our fire escape, in the stories she told us, in the way she sang Gershwin’s “Summertime,” in a curbside rainbow created by the alchemy of motor oil and water from an open hydrant.

Akin to the marvelous, Black radical imagination, to me, is the elevation of what could be considered mundane. The Bible says that “faith is the substance of things hoped for, the evidence of things not seen.”8 Perhaps, folding faith into the pot of imagination (with a bit of speculation) is what this Chicago brand of Black radical imagination is all about. It is Afro-optimism laced with self-determination, an unwavering belief in the possibility of tomorrow. ■

Ayana Contreras is a radio host/producer at Chicago Public Media, a founder/blogger at darkjive.com, and a columnist and reviewer at DownBeat Magazine.