The City-States of the Rust Belt

I grew up in Madison, Wisconsin. During the summer, on weekends and breaks, my friends would often go to Milwaukee (1 1/2 hours drive ) and Chicago (3 hours) with their families for vacations. When I moved to Cleveland, I expected I would similarly visit Detroit (2 1/2 hours) and Pittsburgh (2 hours).

I have taken those trips. But not nearly as much as I thought I would.

Nor have many of my friends. “I have never been to Detroit,” one native Clevelander who travels a lot told me last week. When asked their impressions of it and of Pittsburgh, others replied with answers not so different than a birds-eye, cliched Buzzfeed-type listicle: “Murders. Cars. Steelers. Rivers.”

Why this ignorance and disinterest in cities that are so similar? After all, Detroit, Cleveland and Pittsburgh — to choose the three most alike and near by — were all founded during the same period, settled by similar immigrant groups, and defined demographically by the same migration patters. They all expanded at the same time as industries took off, and contracted in concert as those same industries declined. They all boast cultural riches thanks to philanthropists and foundations of similar stripes. It does not require an adventurous spirit to take a visit. 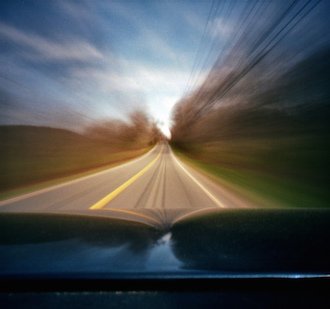 Initially, I blamed sports. Is the Steelers/Browns rivalry so deep that they preclude even trips to eat delicious food and drink beer? Higher education is also a culprit, keeping kids in their home states — Lansing, Columbus, Happy Valley, say, instead of the big city next door.

None of those seemed sufficient explanation. The next theory was even more depressing: civic self-centeredness. I have seen this play out as the editor of Belt. Clevelanders love to read about Cleveland; they do not click much on stories about Detroit. Last week, I was selling Belt books at a street fair in Cleveland. On the table were our anthologies about Cleveland, Youngstown, Cincinnati, Detroit and Pittsburgh. “Take off Detroit and Pittsburgh,” said a man as we looked over the titles. “You can keep the rest.”

I was going down a rabbit hole of grouchiness, mumbling very unkind thing about my adopted city’s lack of regional curiosity. But then I asked the editors of Belt’s Detroit and Pittsburgh anthologies about their cities, and it turns out Cleveland is not unique in this, either. Pittsburgh and Detroit are similarly disinterested each other, and Cleveland.

“We might make a crack about Detroit if the Red Wings are in town…and the Browns used to be fun to poke at, but they have been too bad for too long for that to be fun,” Eric Boyd, editor of The Pittsburgh Anthology told me, “but typically you just don’t hear much of anything. On the other hand, if an out-of-towner comes in, they’ll hear all about how great Pittsburgh is, or if a Pittsburgher visits another city, that city will hear all about how great Pittsburgh is.”

This same combination of civic pride and disdain for neighbors was echoed by A Detroit Anthology editor Anna Clark: “There’s just not that much attention paid to what happens elsewhere, at least in terms of what we could learn from it. You sometimes see articles in local news about how Pittsburgh transformed its economy and its industrial image…but that’s about it. I don’t hear it boiling down into everyday conversation and practical action….Or, Detroiters get defensively proud of even rotten things about our city. ‘Oh, you think you’ve got bad schools, Cleveland? I’ll show you some bad schools!”’ 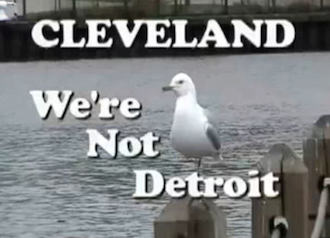 Cleveland and Detroit certainly do like to play off each other in the race to the bottom. If Detroit gets the we have it worse card, Cleveland has the “at least we’re not Detroit!” card, most perfectly summed up in the last frame of the Hastily Made Cleveland Tourism video. This, in fact, may be the most common reason Detroit comes up in conversations in Cleveland — as invidious comparison.

When I first started Belt, I envisioned the region as one whole, splayed across the south side of Great Lakes. These days, I see it as a series of separate city-states, self-contained units looking inward, with the outer ring suburbs serving as a sort of moat. Or, as it appears on my Google Analytics dashboard, a series of large orange dots, with nothing, including transportation, connecting them.

The parochialism, like any form of inbred prejudice, has serious drawbacks, of course. I am poorer for my lack of time spent in other cities, as are my friends. Detroit and Cleveland could certainly learn from Pittsburgh about how to improve economically. And all three cities — as well as Buffalo, Milwaukee, St. Louis and even Chicago — could certainly improve if we would talk to each other about the stunning segregation we all share.

But this civic inwardness, this internal brooding, this external boasting — these are, in the end, one more thing Rust Belt cities have in common. Within each city, we are wrapped in a warm, safe hug with our backs our to our neighbors. “Great Museum, Fresh Water and Disinterested In You!” might work for some regional branding. What do you think? Maybe we should discuss it amongst ourselves.

Anne Trubek is the founder and publisher of Belt.