The Cleveland Income Tax Hike Explained (For Real This Time)

As part of their coverage of Mayor Frank Jackson’s proposed income tax hike in Cleveland, the Northeast Ohio Media Group (now Advance Ohio) ran a strange, divisive, and misleading story entitled “Suburbanites pay 87 percent of Cleveland’s income taxes, but don’t get a vote: How does that work?” Masked as the sort of “explainer” journalism popularized by sites such as Vox.com, the piece does nothing to explain anything. Instead, it’s a collection of tangential and opaque statistics organized in a misleading attempt to drive a wedge between the city and the suburbs. This does nothing to either advance the debate on whether or not Jackson’s proposal makes sense, nor aid prosperity in our region.

Absent are the facts that might put that certain point of view in context: for example, the fact that income taxes only make up a portion of the city’s revenue. As any good homeowner knows, property taxes are a thing. This particular omission is amplified in NEOMG’s list of the city’s top employers, which does nothing to explain “how this works.” Top employers include, in order: the Cleveland Clinic, University Hospitals, the US Office of Personnel Management, Cuyahoga County, the Cleveland Metropolitan School District, the City of Cleveland, MetroHealth, KeyCorp, Case Western Reserve University, and Sherwin Williams. Those organizations are all very large and require very large facilities. Except the top seven and eight of the ten are nonprofits and are therefore mostly exempt from paying property taxes on those very large facilities — including downtown and University Circle properties with high property values.

The premise is also awkward insomuch as workers in the city would presumably object if their offices — where they spend half their waking hours — were suddenly stripped of all city services, including police and fire protection. It’s additionally dishonest because nobody would ever put such a wedge up between a suburb and another suburb. It’s not suggested that Beachwood turn over some of the control of its city to the shoppers at Beachwood Place or commuters who work at Eaton or the Ahuja Medical Center. Nor that Solon give up its right to its own affairs because commuting workers are employed in their industrial parks. As much as we’d all probably like to rein in Linndale or Woodmere for their speed traps, there’s no conversation about colonizing them because of how they choose to cover their operating costs. NEOMG intentionally splits suburbanites from the City of Cleveland for inexplicable reasons — although one can assume it’s because it makes for good clickbait. 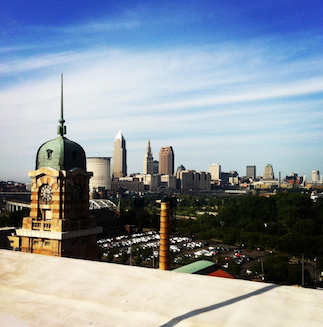 I would also invite any suburbanites who feel as though they are taxed without being represented to move to Cleveland! Vote for our city council. Be my neighbor! I have no desire to drive a wedge between us and welcome you with open arms. Or maybe a CLE Clothing T-shirt if you’re not a hugger. C’mon down. We’ll have a beer … and pay alcohol tax on it.

___
Jeffrey Sleasman is a skinny kid from Cleveland. He works in management at a small biotechnology company in Midtown.