The Coldest Darn Place In The World: The Great Lakes Bowl

Once upon a time, Municipal Stadium wasn’t the Mistake by the Lake. In the 1940s, an optimistic time in Cleveland’s history, the stadium was virtually the center of the sports universe.

The cavernous stadium on downtown Cleveland’s Lake Erie shore was the newest stadium in the major leagues, and filled night after night, thanks to talented teams and the mad genius of owner, promoter, and hustler Bill Veeck. After the Cleveland Rams won the 1945 NFL Championship and decamped to Los Angeles, the Browns came in and virtually revolutionized the sport, thanks to their own resident mad genius, Paul Brown.

But the stadium – which opened in 1931 with a prizefight between Max Schmeling and Young Stribling – also hosted other events, also invariably well-attended. More than 75,000 people showed up for Mass, and the stadium served as a regular stop for college teams.

So it wasn’t completely delusional when in 1947 the Greater Cleveland Knights of Columbus wanted to host a bowl game in Municipal Stadium – but it was delusional enough. “There’s no reason Clevelanders can’t have a bowl game,” said Councilman Stephen Suhajcik, then also grand knight of the Cleveland K of C. 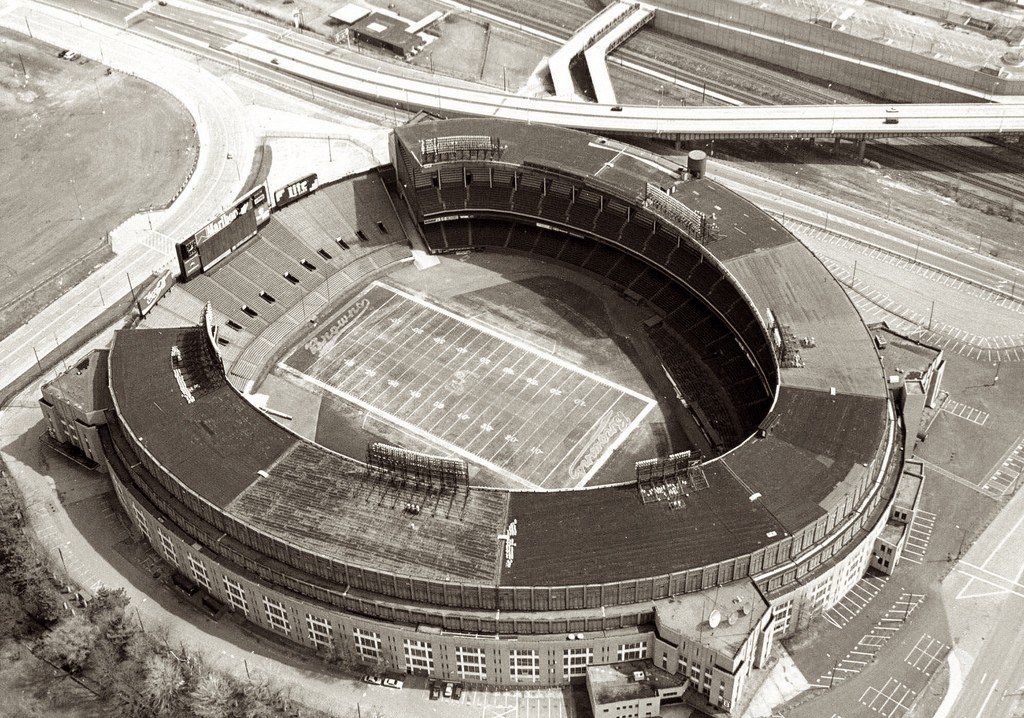 The Knights of Columbus were already involved in the Cleveland athletic scene, sponsoring a well-attended track meet at the Cleveland Arena. And with the lifting of wartime travel restrictions, bowl games were starting to spread. Before World War II, there were five big bowls: the Rose Bowl in Pasadena (except in 1942, when fears of a west coast attack a month after Pearl Harbor relocated the game to Duke University), the Orange Bowl in Miami, the Sugar Bowl in New Orleans, the Cotton Bowl in Dallas and the Sun Bowl in El Paso. The Great Lakes Bowl would be one of five new bowl games for 1947.

Most bowls, then as now, were held in warmer-weather cities. The idea of a bowl game in a cold-weather city was a little more far-fetched. Even more irrational was who the Knights wanted to secure for the game. The committee sent two telegrams: One to Frank Leahy, coach of the defending national champions Notre Dame, and one to Michigan coach Fritz Crisler. They were the top two teams in the nation, and since they didn’t meet during the regular season, a postseason matchup between the two would be of great interest to the public, enough that the Knights of Columbus thought they could give $100,000 to each team and still have enough left over to fund athletic projects throughout Cleveland. In terms of sports chutzpah, it was like knocking on LeBron James’s door and asking if he wanted to be on your 3-on-3 team.

It wasn’t out of the ordinary for Notre Dame to venture beyond its South Bend home. In fact, in the 1920s, as the school built up a national following of Catholic immigrants – the “subway alumni,” many of whom might not even have been college-educated – they were the “Nomads” before becoming known as the “Fighting Irish.”

Ohio had always had a special kinship with Notre Dame. It was on the shores of Lake Erie in Sandusky that Gus Dorais and Knute Rockne perfected the forward pass, which they then used to great advantage over Army, vaulting Notre Dame to national prominence. In fact, Notre Dame had played at Cleveland Stadium before, regularly meeting the U.S. Naval Academy there, including in 1947.

[blocktext align=”right”]In terms of sports chutzpah, it was like knocking on LeBron James’s door and asking if he wanted to be on your 3-on-3 team.[/blocktext]However, Notre Dame wasn’t in the habit of playing in bowl games at that point. It had beaten Stanford in the 1925 Rose Bowl, and hadn’t accepted a bowl invitation since. Not to mention the fact that the Great Lakes Bowl was scheduled on the day Notre Dame would take on the University of Southern California.

“We could change the date to suit Notre Dame and Michigan,” Suhajcik said. “We want to get at least one of them here if at all possible.”

The Western Conference – which is what the Big Ten was called in those days before it had 10 teams – had just reached an agreement with the Rose Bowl, sending the league champion to Pasadena for the game. Nobody from the University of Michigan could be reached for comment by the Plain Dealer, but Western Conference Commissioner Tug Williams said, “In my judgment, there is no chance whatever of this game being played.”

It only took a week for dreams of a packed house watching the Irish and Wolverines to vanish. Organizers were in talks with Southern Methodist University, but after the Mustangs beat Texas and found themselves leading the Southwestern Conference, they removed themselves from consideration, since the SWC champion had an agreement to play in the Cotton Bowl. Their opponent would be Penn State, which had two black players on the team, Wallace Triplett and Dennie Hoggard. Legend has it that when a less-enlightened soul suggested those two not make the trip to Dallas, team captain Steve Suhey said, “We are Penn State,” and a slogan was born.

Ultimately, the two teams to play in the inaugural Great Lakes Bowl would both be Wildcats: Villanova and Kentucky. Villanova, which was a regular participant at the Knights track meet, committed first to the game, its second bowl appearance. It had appeared in the initial Bacardi Bowl in Havana in 1937, also the first bowl game held outside the United States. Fulgencio Batista had just taken power in Cuba, and nearly canceled the game after he found out his picture wasn’t in the program. In what would be an inauspicious sign, the bowl wouldn’t be played again, and it would be another 40 years before teams played outside the United States. Jordan Oliver, the captain of that Bacardi Bowl team, was the coach for Villanova’s second bowl appearance in 1947. 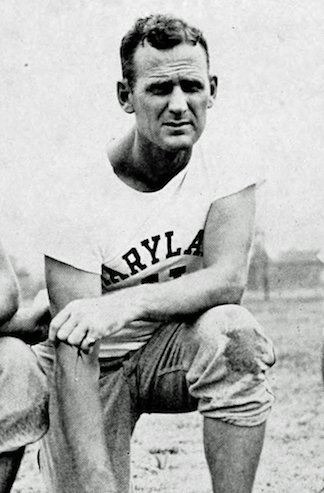 Kentucky, making its first bowl appearance, was a program on the way up, having snagged Paul Bryant as coach after a year at Maryland. Bryant had played as a right end for the University of Alabama opposite Ollie Hutson. By then he had acquired the nickname “Bear” for wrestling one at the age of 13. Bryant promised to be in a bowl game with Kentucky by the 1948 season. In his first year at the helm, Kentucky had a five-game swing from the previous year, going 7-3. The Great Lakes Bowl would be the first bowl appearance for Bryant and Kentucky, but Bryant wasn’t completely unfamiliar with Cleveland. He had hitchhiked to Parma once to spend a summer with his sister and brother-in-law, and saw many Indians games at League Park – including the one where Babe Ruth hit his 500th home run.

WGAR would broadcast the game, which was shaping up to be significantly less well-attended than organizers had hoped, although the Knights still estimated a crowd around 40,000. Kentucky was promising to bring 5,000 fans – and the band, and Baseball Commissioner Happy Chandler, a former U.S. Senator from Kentucky – to brave the chilly lakeside weather.

The Plain Dealer’s pre-game estimate was about 20,000 spectators, absent any type of brisk walk-up. All told, the game had “14,908 spectators and 65,000 empty seats,” according to the Plain Dealer. The Cleveland Press reported that around 20,000 tickets were sold, meaning the bowl game broke even, but the remaining 5,092 fans elected to stay home. Bear Bryant didn’t blame them, saying later that the game “was the coldest darn place in the world.” United Press reports said the fans who were there were “lost in the confines of the vast lakefront bowl.” By comparison, nearly 105,000 people crammed into the Los Angeles Coliseum to watch the Irish drub USC, 38-7, to finish the season undefeated. Michigan would go on to win the Rose Bowl, and the two teams split the mythical national title that year, with arguments continuing to this day.

Even without the Irish or the Wolverines, the Great Lakes Bowl was a barnburner of a game. Kentucky took a 10-0 lead into the fourth, but fought off a furious Villanova comeback to win 24-14 and collect the trophy made by Rickey Tanno Jewelers downtown. Tanno, himself a Knight (and later the namesake for a Knights chapter in the Cleveland area), donated the trophy.

Bill Boller scored two touchdowns for Kentucky, and George Blanda kicked a field goal and three extra points. Bryant, still growing into his role at coach, would say later that he didn’t know how to use Blanda, who was described by the Plain Dealer as “no Otto Graham,” when Cleveland fans could afford to be snobby about their quarterback. “He would have become a great player if it wasn’t for me,” Bryant said of Blanda, who still spent more than 25 years playing pro football.

Despite the turnout, Plain Dealer sportswriter James E. Doyle said, “The promoters of the first Great Lakes Bowl game were not bowled over for a long count by the short count at the gate. They’re certain that the Great Lakes will be a gravy bowl in time.” Suhajcik said, “We definitely will continue with the game next year. We feel it was a success.” 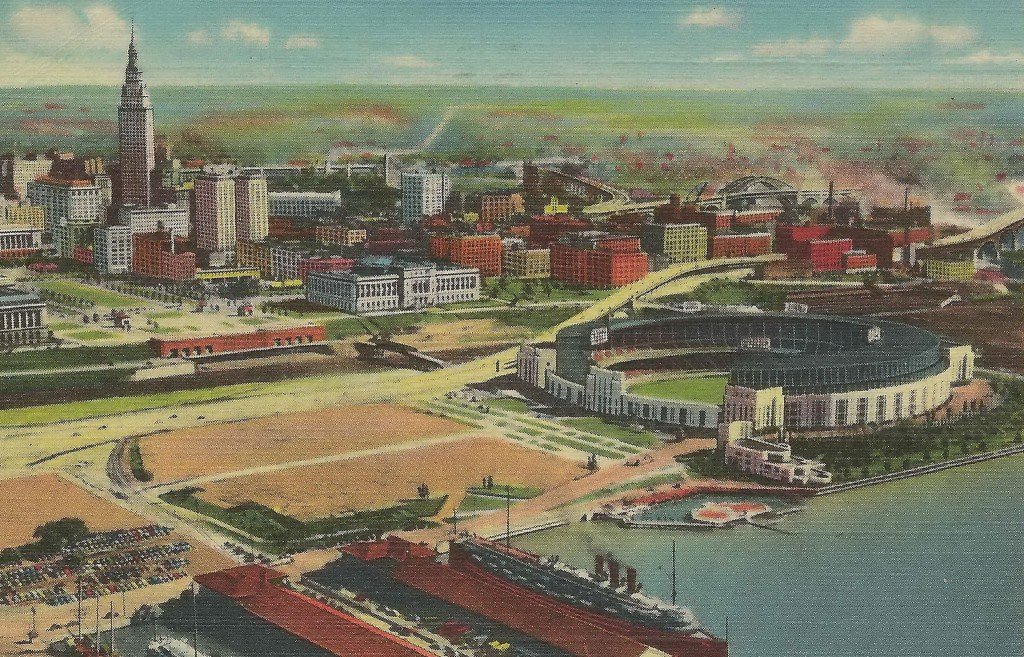 Organizers believed the flaw in their plan was that the Great Lakes Bowl didn’t capture the public’s attention because it didn’t have two unbeaten teams, or teams that were of local interest. For 1948, they’d have at least one in-state school. “We feel that people here would like to see Cleveland’s best against some new opposition,” said Jim Carney, the director of the game.

They considered Baldwin-Wallace, Dayton, and Miami before finally settling on John Carroll, making its first bowl appearance. For out-of-state teams, they looked at Pitt or Michigan State before signing up Canisius, a Jesuit school in Buffalo.

The second Great Lakes Bowl was another corker, with John Carroll scoring a fourth-quarter touchdown for a 14-13 win. And the theory proved correct, as the game outdrew the previous year’s contest, with 17,964 fans in attendance.

[blocktext align=”right”]Bear Bryant: the game “was the coldest darn place in the world.”[/blocktext]The game was scheduled again for 1949, but fell by the wayside as Cleveland tried unsuccessfully to pry the Army-Navy game away from Philadelphia. The city hasn’t hosted a bowl game since. Cold-weather bowl games haven’t really caught on either, with only the game at Ford Field in Detroit (a dome) and the Pinstripe Bowl in Yankee Stadium in the Bronx currently being offered.

But the Great Lakes Bowl was the first of many postseason appearances for Bryant, who would go on to make three more bowl appearances with the Wildcats. By 1950, he was the hottest coach in football, and turned down jobs in California, Texas, and with the Washington Redskins. But two years later, he left for Texas A&M. He later said he knew it was time to leave Kentucky when the school gave basketball coach Adolph Rupp a Cadillac and he got a cigarette lighter, but that might have been a tall tale spun by the Bear. Bryant was succeeded by a man who would get used to following legends: Browns assistant coach Blanton Collier, who a decade later would return to Cleveland after Art Modell unceremoniously fired Paul Brown. Bryant ended up at his alma mater, and turned Alabama into a perpetual power, setting a record with 323 wins and becoming, as one sportswriter put it, “as much at home in a bowl as oatmeal.”

___
Vince Guerrieri has spent pretty much his whole life in the Rust Belt. He was born in Youngstown three weeks before the mills started closing, and left there without really escaping. He’s a Bowling Green State University graduate, spent 15 years in newspapers, and lives with his wife and daughter in suburban Cleveland, where he’s slowly trending toward respectability (and he’s just as surprised by that as you are).