The Ecology of Ruin

As a grad student in ecology, I spent a lot of time in the woods with a camera for company.  I was living in upstate New York, studying how plants recolonize forests growing up on old fields, and why some return faster than others.  Central New York State is a bonanza of now-forested fields.  In the county where I lived, eighty percent of the land was cleared for agriculture by 1900, but by the early twenty-first century, over half of the landscape was forested again.  Traipsing through these young forests, I framed images of agricultural relics overtaken by vegetation: an elephantine threshing machine rusting amid pole-sized timber, a hay rake rotting in the shade, a corn picker obscured by brush.  I took portraits of my study organisms growing out of soil collected in feed boxes, automobile frames, and rolls of barbed wire. 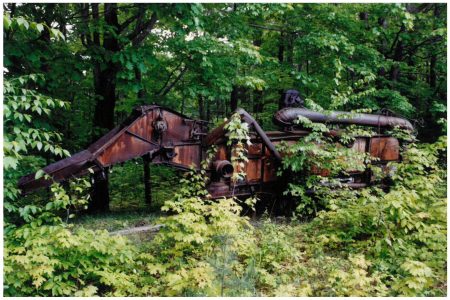 Why are we fascinated with these images?  The contemplation of ruins is at least as old as the fall of Rome.  But I suspect our current meditations on ruin are not quite summed up by “Ozymandias.”  With a new public consciousness of ecological destruction and restoration, we seem to interpret ruin art differently; the focus has shifted, from the elements of the composition that are overgrown to the elements that are growing. 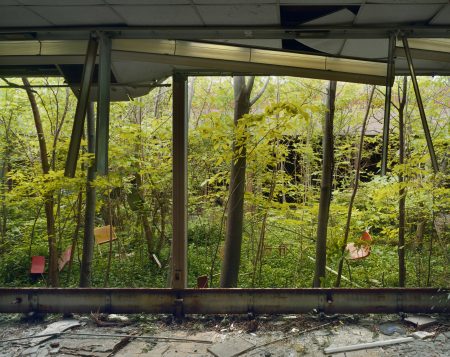 Consider Andrew Moore’s photograph Cafeteria, Ferris Junior High School, Highland Park, (image above).  From inside a dark school, the camera looks out a wall of missing windows into what must have been a courtyard.  In the foreground, gray debris on the floor, gray support beams, and sagging gray drop-ceiling tiles form a frame.  Within the frame is a brilliantly green forest, lit from above.  The larger trunks look like trees of heaven, the understory a riot of skinny birch stems and leaves, the ground cover lush and dense.  Seven bright plastic chairs—red, yellow, and green—lie in the forest as if tossed like jacks.

Perhaps the most obvious message of this image is that, in this place, efforts to teach children to eat healthy meals and use table manners failed.  The economic, political, and cultural systems supporting these efforts failed.  The children are gone; the cafeteria has gone wild.  [blocktext align=”right”]In the first place, ruin imagery is about mortality, the knowledge that we and the civilizations we cherish swiftly die and disappear.  Vanitas vanitatum.[/blocktext]

Mixed with the idea that all human achievements will fall is the feeling that many of them deserve it.  Images of ruin offer a kind of righteous pleasure in retribution against the rich, powerful, and proud.  Looking at central New York’s tumbledown stone walls, I often thought of Jesus saying of the Jerusalem temple, “Seest thou these great buildings?  There shall not be left one stone upon another, that shall not be thrown down.”  He had just expelled the money-changers.  In a landmark piece on Detroit’s derelict pre-Depression skyscrapers, Camilo José Vergara quotes pastor Bill Wylie-Kellermann, who said, “The skyscraper, from a biblical perspective, may be as much an act of pride as the Tower of Babel.  They are huge projections, they have a life and a history, they may even be synonymous with idolatry.”  Ruin art celebrates destruction as the rightful end of overambition.

But if Moore’s cafeteria is an image of human defeat, then it also shows the victors—trees.  Specifically, the lowest plants seem to vanquish the most vaunted accomplishments.  In the cafeteria, urban “trash” trees and weeds have conquered the educational enterprise.  Often artists show delicate ferns and vulnerable tendrils taking over grand structures.  Focusing attention on the plants in the frame sets up a David-and-Goliath struggle in which nature is the unlikely winner.  [blocktext align=”right”]This is environmentalism’s opening: increasingly, artists and audiences seem attracted to the trope of nature’s renewal, resurgence, redemption.  We want to believe that ecosystems can, and should, recover from any damage we do.[/blocktext]

Whether or not this is true, it’s part of the appeal of ruin art—but not the whole story.  These images allow us to see nature recovering while also letting us hold on to cultural artifacts.  In Cuyahoga Valley National Park, you can visit the site of a stadium, aptly named The Coliseum, where the Cleveland Cavaliers played from 1974 to 1994.  It’s a 300-acre meadow that hosts bobolinks, savannah sparrows, and eastern meadowlarks.  Why aren’t photographers flocking to this demonstration of ecological resilience?  The same reason children whine about visiting Gettysburg.  Without a map, you would never know that pivotal conflicts took place there.

By definition, ruin imagery leaves the legacies of human occupation in the frame.  It indulges our affection for fragments of history, traces of people like us, even our own picturesque trash. Adults who hated junior high can still feel nostalgia for bright plastic school chairs.  In “The Ruined Cottage,” Wordsworth recounts at length how he grieved for the fate of the cottage’s human inhabitants, but then returned to the place “Fondly, and traced with milder interest/ That secret spirit of humanity/ Which, ‘mid the calm oblivious tendencies/ Of nature, ‘mid her plants, her weeds, and flowers,/ And silent overgrowings, still survived.”  The art of ruin captures the tension between our belief that nature must win, which is relatively new, and our very old desire to be part of that win—to endure.

That’s a lot of ethical and emotional force for a single photograph.  Pathos pulls us in, but more fundamentally, ruined landscapes fascinate us because we read in them a narrative structure.  They make visible a story moving through time: the destruction of a forest, the assembly and disintegration of a cafeteria, the recreation of a forest.  Beyond the aesthetic pleasure of viewing these images is the intellectual satisfaction in interpreting the world around us.  Ruins are clues to the ongoing mystery of a place.

Of course, the challenge for artists and their audiences is to get the story right.  Images can mislead, and this has fueled the resentment of many Detroiters and others who disparage what they call “ruin porn” for cropping out the people who remain, their hard work and progress toward rebuilding.  It’s easy to read the ecological history of central New York in its overgrown cellar holes.  But I spent six years discovering exactly what legacies of agriculture persisted in the region’s soils and forests.  Stories of ruin and recovery are worth telling accurately and fully.  This may take words and numbers as well as pictures.

Kathryn M. Flinn is a professor at Baldwin-Wallace University. Her previous writing for Belt can be found here.

Thanks to Andrew Moore for permission to use his photograph.